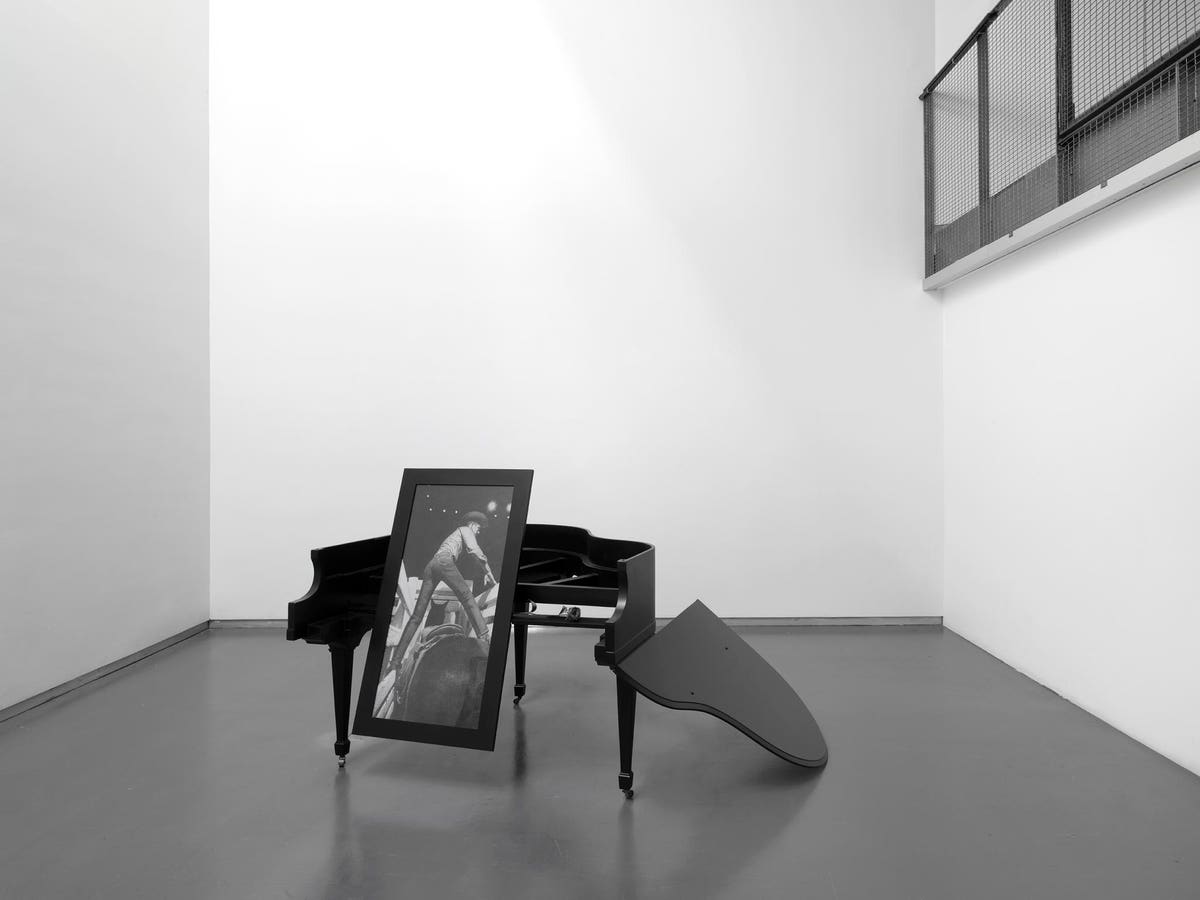 As the artist Christine Rebhuhn makes her way through the world, her brain makes visual associations she later uses in her work. For example, while living with her family in Iowa during the early days of the pandemic, Rebhuhn traveled to her father’s childhood farm, and discovered a box of Life magazines from the 1960s in an old chicken coop. In one of the issues, she was drawn to denim ad that featured a cowboy standing over a horse’s back at a rodeo. Later that week, while visiting with a friend from high school who repairs pianos, and offered one to her for free, she saw the shape of the cowboy’s legs in the curves of one of the instruments in his workshop.

“It’s pretty natural for me to have flash insights that are visual,” Rebhuhn says. “They just happen to be objects that I kind of suspend in my mind for a little while and hold them there. Eventually, I find a place for a couple of things, and it just feels like they have to be together.”

The process of making a sculpture, she says, slows down the insights, and forces her to refine them. “Whatever I’m doing physically can feed back into the original,” she says. “I really like that rhythm of slowing down the pace.”

In “The Breeze Will Kill Me,” a solo exhibition of new works by Rebhuhn that closed on November 13 at Thierry Goldberg gallery in New York, the artist’s process was on full display. Consisting of sculptures that resided on the floor and hung from the walls and ceiling, the overall feel of the show was decidedly butch, in the sense that it emanated a sort of confidence historically reserved — and often put on — by very masculine men.

Some of this comes from the cowboy, who takes center stage in Words Dry and Riderless (2019), the sculpture Rebhuhn made using the associations she made back in Iowa. Consisting of the piano, which has been stripped bare of its musical components, and painted in light absorbing black lacquer, the sculpture features a framed scan of the photograph leaning against the front of the piano, where the keys should be. The positioning of the frame is casual and very suggestive, as if the framed element itself — and not the cowboy within — is leaning against the piano, checking out someone’s ass.

Many of the sculptures conjure associations with traditional Americana, and notions of American masculinity. Long Wind (2021), a hanging sculpture that consists of flutes melded together in a single line, looks like a line of birds on a wire in the desolate American West—one can easily imagine some rogue driving past them on his way to drink himself to death. Last Bare Chamber (of my heart) (2021) consists of an expandable wooden table, also covered in black lacquer, that is punctuated in the center by a shining mellophone, the sort of brass instrument used by a marching band; it emanates the feel of a sock wad stuffed down the front of someone’s pants. The show itself is named after a lyric in “The Breeze/My Baby Cries,” a song by Kath Bloom and Loren Mazzacane Connors famously covered by Bill Callahan. The song, which could be about a broken heart or a broken man or really anything at all, depending on your mood when you listen to it, includes the lyric: “It’s so hard to tell where I end and my father begins,” which is itself the quintessential ode of the American man.

“I’ve listened to the Bill Callahan version of the song more than any other song I’ve ever listened to,” Rebhuhn says. “It’s loose and poetic, but also sharp. It kind of resonated with what I was doing [in my work], which is just like having these like sharp, incisive, really direct moments and then also have this kind of ethereal vibe.”

Ultimately, where the show’s confidence originates is from Rebhuhn herself, who in person, presents—at least superficially—as decidedly femme. She trusts her insights, and the process that refines them until they become artworks that speak to the viewer independently. Of course, the ability to do this is not inherently masculine in any way, it’s just that women have not often been given permission to project confidence without apologizing for it in mainstream culture.

Which is not to say that the work is never feminine. In Your Half-Cracked Way (2019), a photograph of a barking dog hangs in the frame of what appears to be a cheval mirror. The piece originated when Rebhuhn was working as a nanny; walking around with her charge, she constantly saw barking dogs in the frames of other people’s strollers. (Not literally — figuratively.) When she came upon the photograph of a barking dog at a Brooklyn Dodgers game from a 1942 issue of Life magazine, a connection was forged. The cheval mirror is actually the frame of a baby stroller. In the corner of the frame is nestled a gray porcelain lily, made by Rebhuhn, who studied ceramics in art school. The open faced lily extends the language of the barking dog’s mouth. The forms together, Rebhuhn says, connect to “I Am in Danger – Sir – ” a poem by Adrienne Rich that pays homage to Emily Dickinson. Motherhood in the stroller; femininity in the flower; a rejection of expectations by Emily Dickinson, who lived a reclusive life and never married. “Half-cracked,” or crazy, in the eyes of society. Maybe a rejection of these notions of femininity isn’t Rebhuhn means to address at all, but it feels good to see sculpture made by a woman that is so unafraid to assert that is correct, right, deserving to be in the world.