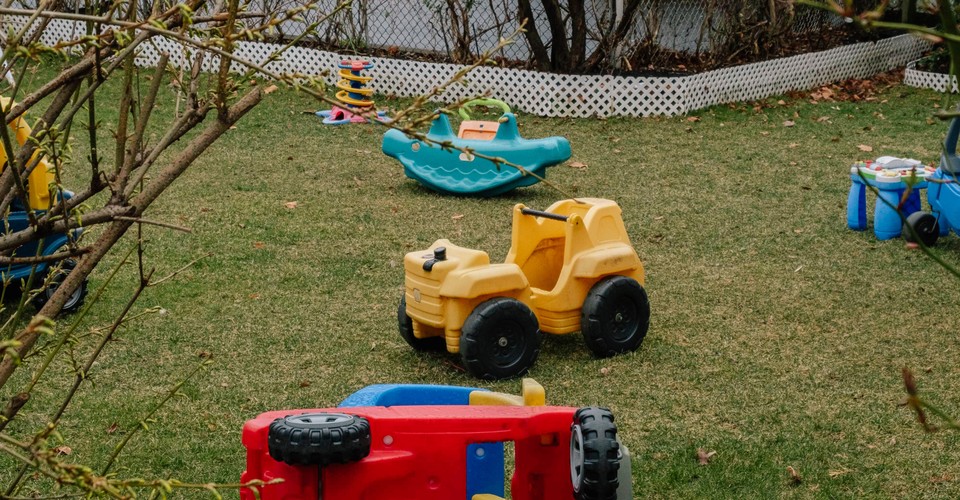 The Democratic child-care proposal now working its way through Congress combines bad ideas from the Affordable Care Act with even worse ideas from the 1990s’ welfare reform. Despite worthy intentions, it will drive up costs for many middle-class families while providing no benefit at all to the poorest and most vulnerable children. If lawmakers do not fix these design problems, they could wreak havoc on many of the families they are trying to help.

Unlike most other developed countries, the U.S. provides virtually no help for parents who need child-care services. Parents pay more than $15,000 a year on average for a spot in a licensed day-care center. And those who can’t afford such a steep price are forced to patch together care from a variety of informal child-care providers or to drop out of the labor force just to avoid child-care bills.

Derek Thompson: Why child care is so ridiculously expensive

The Center for American Progress provided the original design for the child-care legislation in 2015, just one year after the launch of the ACA exchanges, and the two programs are unsurprisingly similar in design. Under the ACA, the federal government subsidizes the cost of health care on the exchanges. Under the child-care plan, the federal government will provide money to states so that they can improve the quality of child-care services, increase the pay of child-care workers, and subsidize the price of child care for families who use those services. In the first year, only families with incomes below their state’s median will be eligible. In the second, third, and subsequent years, the eligibility cutoff is respectively set at 125 percent, 150 percent, and 250 percent of each state’s median income. In 2028 the program expires—a gimmick to keep down the 10-year cost.

Such hard eligibility cutoffs, sometimes called benefit cliffs, mean that earning a single dollar beyond the limit could cost families tens of thousands of dollars in subsidies. Some two-income families may find that they are better off if one parent leaves the workforce—not to take care of the kids during the day, but to afford to have someone else watch them. (In heterosexual couples, the parent who leaves is almost always the mother.)

Parents with incomes above the cutoff will face another challenge: higher prices for the same care they currently receive. As of 2020, the median wage for child-care workers was just $12.24 an hour, putting them in the bottom 2 percent of earners. The legislation under consideration mandates that participating child-care centers pay workers the same as elementary-school teachers with similar credentials and experience. The legislation would also dramatically increase demand for child-care services as newly subsidized users pour into the sector. This would force wages upward even in the absence of an explicit wage mandate, because child-care centers would have to increase pay to attract new workers.

When analyzing a nearly identical child-care proposal for the District of Columbia, the city’s Office of the State Superintendent of Education concluded that hiking wages to elementary-school-teacher levels would increase the annual unsubsidized cost of infant and toddler care by $6,335 to $12,175, depending on the quality and location of the care being provided. These numbers almost certainly understate how much costs would rise, because, as the report’s authors point out, they do not include any of the wage increases that would likely be required for administrators and other staff not directly involved in care. In areas where the pay gap between child-care workers and elementary-school teachers is greater than it is in D.C., wages and prices would rise by an even higher amount.

These increased prices would hurt only families with incomes above the subsidy cutoffs, meaning they might cause anger and frustration but not extreme hardship. Another provision of the proposal, however, would have more dramatic consequences: Under the plan, children are eligible for benefits only if their parents are engaged in one of 11 eligible activities.

These kinds of activity tests featured heavily in the ’90s welfare reform that replaced Aid to Families With Dependent Children with Temporary Assistance for Needy Families. They have been used ever since to make life harder for destitute single mothers while shrinking the welfare rolls.

To satisfy the activity test contained in the child-care legislation, at least one parent needs to be engaged in work, job-search activities, job training, drug rehabilitation, or mental-health treatment, among other things. According to the Congressional Research Service, this test will make about 5 percent of children ineligible for benefits. And those 5 percent will be among the poorest and most vulnerable kids in the country.

In addition to cruelly excluding the most disadvantaged children from the benefit, this activity test will be annoying and intrusive for many families enrolled in the program. People who work informal jobs will have to gather evidence to prove that they are eligible. People who lose jobs will have to reveal this hardship and then demonstrate that they are looking for work. Others will need to share their mental-health and drug problems and provide proof of treatment.

Making parents expose potentially painful and embarrassing aspects of their life, just so they can have child care and the government can figure out which poor kids to kick out of child-care centers, is both cruel and ridiculous.

When confronted with these design problems, many political observers will no doubt respond that, although the program is not perfect, something is better than nothing. But in many places, the result of this legislation actually will be nothing, because it allows state governments to choose whether or not to participate.

This child-care legislation will likely spur the same result. Republican governors, who are already disposed to reject social-spending increases, especially if that will undermine a sitting Democratic president, will point to the middle-class price hikes, the asymmetrical treatment of stay-at-home parents, the asymmetrical treatment of church-based child-care providers, and the temporary nature of the program as reasons for not participating.

More than 30 percent of the nation’s young children—and 44 percent of the nation’s young Black children—live in the 12 states that still refuse to participate in Medicaid expansion. Nearly half of America’s young children live in the 26 states that opted out of the extended pandemic unemployment benefits earlier this year. These figures should provide a sense of how many children are likely to be excluded from the new child-care program if the Democrats design it so that states can choose not to participate.

All of these problems are fixable, provided the Democrats are willing to spend more money.

Elliot Haspel: American parents don’t get how much life is about to improve

Democrats can simply eliminate the activity test from the bill and provide subsidies to all parents. These ideas are hardly foreign to Democrats: Their universal-pre-K proposal does not include an activity test and provides subsidies to all parents. And the federal government could directly administer the program in states that choose not to participate, just as it runs ACA exchanges in states that have chosen not to set one up.

If Democrats can’t rally support for these kinds of simple changes, they may need to ask themselves whether setting up a cheap, badly designed, temporary program is better than beefing up other parts of the “Build Back Better” agenda. If the program turns out to be a mess, it might not be extended in 2028, and wind up a footnote in the history of America’s failed child-care system rather than the beginning of a lasting solution to the problem.