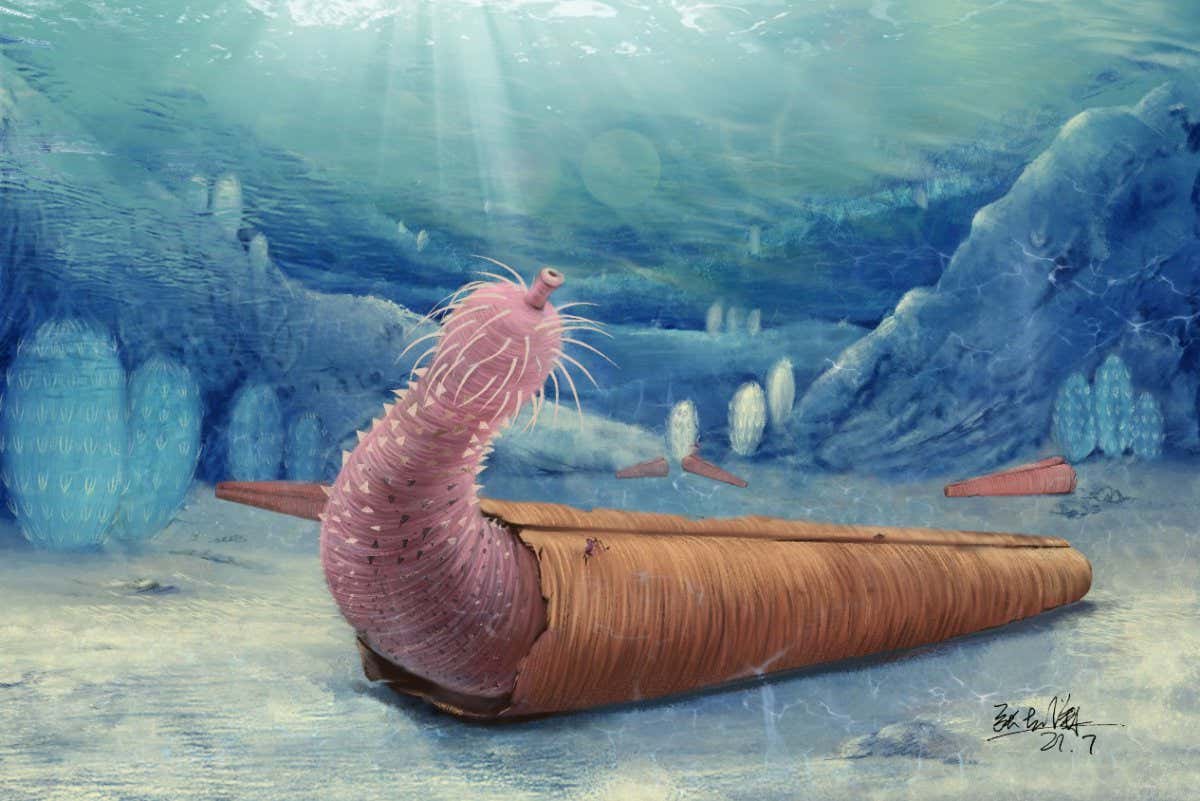 More than half a billion years ago, tiny penis worms had learned to protect themselves by grabbing and living inside snail-like shells, like hermit crabs do today

Priapulids are tiny, toothed sea worms that are sometimes carnivorous. Colloquially named “penis worms” for their phallus-like shape, they apparently started inhabiting empty cone-shaped seashells 530 million years ago. This implies that the animals were protecting themselves from predators in surprisingly advanced ways for the time, says Martin Smith at Durham University, UK.

Previous research has suggested that true multicellular animals evolved rather abruptly through massive evolutionary developments and life form diversification in an event known as the Cambrian explosion, roughly half a billion years ago. While the evolution and diversification of predators certainly helped fuel this event, scientists have generally believed that life forms didn’t really begin to become as ecologically and behaviourally complex as animals today until several hundred million years later, says Smith. His group’s finding challenges that belief, he says.

“Grabbing a shell… takes a level of behavioural complexity to say, ‘Well, I need to find a shell that I fit in’,” says Smith. “And it requires a reasonably sophisticated neural processing level, which isn’t something we’ve associated at all with [these] worms that just slime around on the sea floor, [nor] with the Cambrian.”

“But fossil records keep throwing us these curve balls, and making us think, ‘Whoa, OK, this was even more of an explosion than we thought’,” he says.

Smith and his colleagues at Yunnan University in Kunming, China, ran advanced microscopic imaging on Cambrian rocks from the Guanshan fossil deposits in southern China, which contain structures “like little pieces of string” measuring just a few millimetres long. The Guanshan fossils preserve both hard and soft tissue, providing scientists with a rare glimpse into the life of worms – which are all soft tissue except for the teeth – living during the Cambrian period, says Smith.

The researchers discovered four specimens of worms belonging to the phylum Priapulida, which they suspect represent a species within the extinct genus Eximipriapulus. Remarkably, all four of these animals were found nestled down inside the conical shells of hyoliths (of the genus Pedunculotheca), a mollusc-like animal that has long since become extinct and has no close relatives alive today.

Modern-day priapulan worms don’t live like hermits, but hide from predators in sand or in poorly oxygenated water. But all four of the newly discovered fossilised worms were hanging their heads out of size-appropriate shells, like hermit crabs do today. This marks the earliest evidence of such behaviour: hermit crabs didn’t adopt this sort of lifestyle until about 170 million years ago in the midst of a later evolutionary “explosion” called the Mesozoic marine revolution.

In that Mesozoic marine revolution, “predation suddenly stepped up a notch”, says Smith, likening the event to the invention of gunpowder. “You had bows and arrows, but suddenly the rifle appears and warfare changes completely, and you need to have a very different defence approach.”

The appearance of the hermit crab during that “revolution” was one such approach, says Smith. But finding such behaviour during the first major evolutionary explosion 300 million years earlier,  when animals were assumed to be far less complex, was completely unexpected.

“It’s like finding a picture of a cannon in the Bayeux Tapestry,” says Smith.