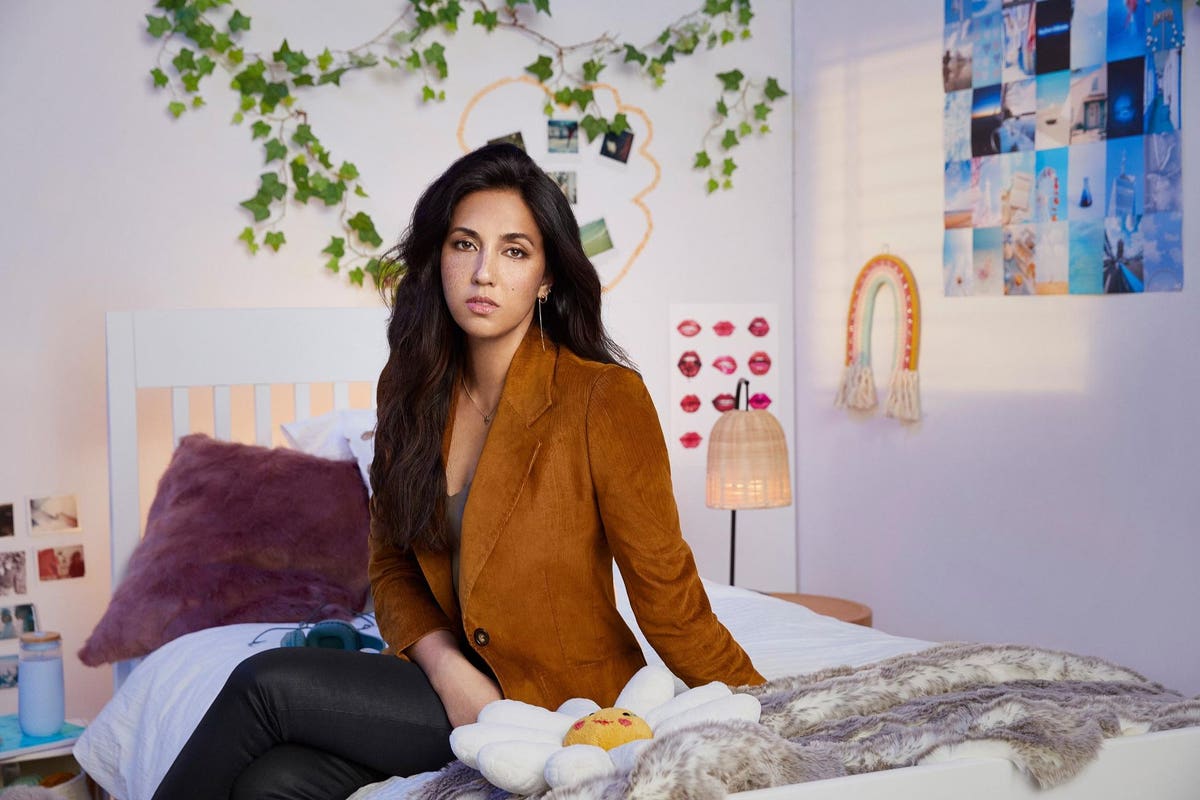 In the six-part docuseries, Undercover Underage, 38-year-old child advocate and writer Roo Powell and the team at SOSA (Safe from Online Sex Abuse) work alongside law enforcement, creating decoys to lure online child predators. The show, streaming now on Discovery+, illustrates the detailed crafting that goes into transforming Powell into multiple internet teenage personas to identify and track down some of the most dangerous people on the internet. The team works out of a large rented house, each bedroom decorated to match each of the decoy’s personalities. The show seeks to educate its audience about how online grooming, sexual abuse and exploitation of vulnerable minors can happen quickly and quietly.

Undercover Underage follows SOSA in real-time as they create three underage characters for Roo, completely transforming her into a believable teen girl before and during her communications with potential predators. The series lays out each team member’s role and how they come together to locate a predator online.

I spoke to Powell about how she got involved with SOSA. We also discussed how she separates this work from her home life (Powell herself is a mother of 3) and what she thinks parents need to know and communicate to their children about internet safety.

Risa Sarachan: What got you involved with this line of work?

Roo Powell: I am a career-long writer, and child advocacy has always meant a lot to me. I’ve written about sex trafficking and the refugee crisis, and sex abuse. When I was working in the tech space, my team put a decoy online to demonstrate the ubiquity of child predation. I ended up writing about it, and my piece went viral. It garnered some media attention, and I realized that I wanted to put all my effort into moving the needle when it comes to online sexual abuse and exploitation. This all led me to start SOSA.

Sarachan: It is fascinating watching you and your team build a believable world for each character you play and think so closely about every detail. How did this group of people come together?

Powell: The work that you see on Undercover Underage doesn’t happen 24/7; we do them in what I like to call them, sprints. We have a rolling staff that hops on when we’re focusing our efforts on decoy work. I’ve worked with Shelby and Kelly before — in fact, I’ve known Kelly for over a decade. Shelby is our social media lead, and she’s got a lot of knowledge of internet culture. She also makes up for where I lack — especially when it comes to niche topics like anime and gaming. Kelly heads up all of our research. Matt’s our visuals lead, who is responsible for de-aging my photos. And Avalon, a writer, is our story developer who is really in charge of building out a decoy’s background and story.

Sarachan: Where did the idea to create Undercover Underage come from?

Powell: After the piece I wrote went viral, and I created SOSA, a production company reached out to me. I hemmed and hawed a little at first, but they presented the docuseries as a way to get this message out to millions of people. That really sold it for me.

Sarachan: How does it feel to be filmed by a camera crew while having these uncomfortable interactions with predators?

Powell: Uncomfortable! Well, uncomfortable if I let myself think about it for too long. I’m in a room with a producer and sound and the director of photography and it is definitely a vulnerable experience. Sometimes, frankly, it’s humiliating. But everyone knows how touchy this is, and they’ve all made me feel safe and supported, even if I’ve just been on the receiving end of a lot of hateful verbal abuse.

Sarachan: What do you hope the show achieves?

Powell: I hope Undercover Underagewill not only educate people about the dangers of communicating with strangers online but also aid in empowering a society to tackle this issue. I think combating sex abuse and exploitation really starts with awareness. This is uncharted territory for so many of us. We (anyone my age) didn’t grow up with smartphones in our hands, but our kids are.

One of my hopes is that along with raising awareness, we’re raising empathy. There’s so much victim-blaming, and I think victim-blaming is the number one thing that keeps predators safe and emboldened. I want us to be able to adopt empathy-led education and support as the standard, not the exception. We hope to inspire states to raise the age of consent from 16 to 18 and to adopt grooming statutes.

We’re also hoping for better paths to rehabilitation for would-be perpetrators before they ever harm a child. Ultimately, I hope that this is a catalyst for a lot of change.

Sarachan: Your work with SOSA has led you into some very dark situations. How do you emotionally separate out from it?

Powell: Sometimes I laugh when I get this question because my knee-jerk reaction is to say, “not well!” I compartmentalize what I do by keeping my professional and personal lives separate. I don’t have pictures of my kids on my desk. I use a different phone to text with perpetrators because I don’t want to have conversations on the same phone I’m using to take pictures of my child’s sporting event. When I’m home, I’m just mom — the one signing the permission slips and driving them to practices. If I have to take a call, I do it outside. I’ll even get in my car and just drive off to get a Diet Coke and take a call. I have a therapist that I attempt to see weekly, who reminds me that, when I’m taking on the abuse of my decoys — Flori or Natalie or someone else — that it’s theirs to keep, not mine. That sounds like a weird way to put it, but ultimately, I don’t have to hold onto the abuse these decoys get. I attempt to meditate, but I am not excellent at it. My latest thing is to turn on Planet Earth, mute it, and queue up a playlist on Spotify. There’s something about reminding myself that I’m a small part of a great, big world that gives me a solid perspective.

Sarachan: Is there any one experience with a predator so far that has stuck with you the most?

Powell: One time, we had an abusive perpetrator block us after reaching out to one of our decoys on Reddit for material for his own self-gratification. I was so irritated we didn’t find out who he was before losing communication because this was clearly not his first rodeo. About a month later, we checked the DMs of a different decoy, and he just so happened to reach out. Our response was, holy shit.

First of all, what are the odds? Second of all, how often does he do this? And third of all, we now have another opportunity to find out his identity. He’d already seen me as one decoy, so we threw together a very quick new persona with glasses, blonde hair, and red lipstick. He didn’t recognize me, which maybe says more about his frequency and volume of victims than it does about my stellar disguises. Through that second decoy, we were able to identify him and send his information to law enforcement.

Sarachan: What keeps you motivated to do this work?

Powell: I keep thinking about young people who said, “I wish people talked to me about this when I was younger” or “I could have used SOSA five years ago.” Last year, I made a series of TikToks, and a few people asked, “Could you make a POV TikTok as a mom telling me that my abuse wasn’t my fault?” That’s the one that broke me. Every kid needs an adult in their corner. Much of what drives me is the conviction that we need to provide our kids a soft place to land.

Sarachan: What conversations do you think parents or guardians need to be having with their children about online sexual abuse?

Powell: What I tell parents is that the best way to prevent predation right now is to have open lines of communication with your kids, because there’s really no stopping them from being on the internet — whether at home or at school or at friends’ houses. It’s part of our culture now. It’s part of their education, and it’s a part of how they’re being raised. The best thing we can do is prepare them for it. Teach them to trust their own gut. When something feels wrong or ick or gross or off, trust that feeling, and trust that they can go to a parent, caregiver, or trusted adult about it.

Sarachan: There is a touching moment in one of the first episodes where you speak to your kids over the phone about how much you miss them. What do your children think about the work you do? What do you hope to instill in them from what you’ve witnessed through this work?

Powell: Each of them has an age-appropriate understanding of what Mom does. They’re proud of me, which is a lovely feeling. Before this, I worked and would have to travel, and I think it’s healthy for them to see me pursuing goals.

They are living a different kind of childhood than I did. Part of it has to do with the time; part of it has to do with Asian culture. I grew up learning to be deferential and swallowing my own discomfort instead of risk making someone else uncomfortable. I kept a lot of things to myself for fear of being shamed or blamed. My kids know there are no such expectations of them.

Recently, my daughter watched me walk across a field to confront another adult during a game who egregiously insulted a group of kids. She couldn’t hear what I said, but she saw me speak calmly. She saw me refuse to back down. She also saw that, under the surface, I was mad as hell. Could I have curbed my language slightly? Maybe. But ultimately, I hope I’m teaching them not to accept bad behavior as the status quo.

Sarachan: What are you working on next?

Powell: Still this! Still growing SOSA. I speak with high schoolers and middle schoolers. I’m also helping with various law enforcement departments. One of the roles I’m proudest of currently is being an advisor for a company called Spectrum. We take our conversations with perpetrators and identify patterns in language. Our learnings help inform their data science team, which helps their artificial intelligence to better detect signs of child abuse and toxic behavior online. Spectrum’s clients include companies like Pinterest, Tinder, and a variety of consumer brands. I have the privilege of talking with folks in the Trust & Safety space, and it’s great to see that so many of these companies are making concerted efforts to make their platforms safe for their user base.

I’ll keep doing this work for as long as it makes sense. At the same time, if my work abruptly ended now, and all I had to show for it was the docuseries, but that Undercover Underage informed a lot of people, was the impetus for some change, and was part of making the world a little safer for a bunch of kids? Then that will be enough, and I’d be ok doing something else.

This interview has been edited and condensed for clarity.

Undercover Underage is now streaming every Tuesday on Discovery+