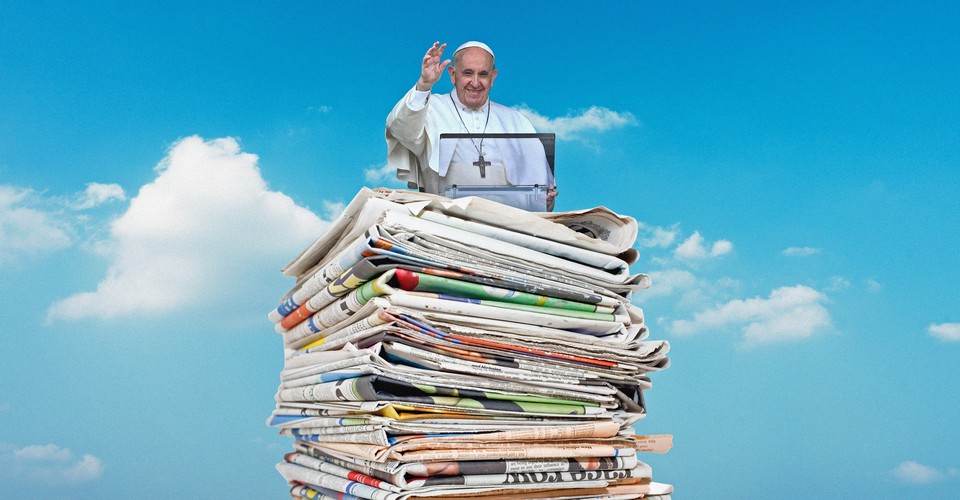 Last weekend, Pope Francis gave my profession a gift: a thoughtful outsider’s perspective on the proper role of journalists. “Your mission is to explain the world, to make it less obscure, to make those who live in it less afraid of it and look at others with greater awareness, and also with more confidence,” he said, adding that, to succeed, journalists must first listen.

By this, he meant far more than picking up a telephone or jumping onto Zoom. He meant “having the patience to meet face-to-face with the people to be interviewed, the protagonists of the stories being told, the sources from which to receive news,” because “certain nuances, sensations, and well-rounded descriptions can only be conveyed” if the journalist is present to see and hear. That means “escaping from the tyranny of always being online, on social networks, on the web,” he insisted, and taking time to be present, despite the difficulty. We need journalists, he said, who are willing to “wear out the soles of their shoes.”

His advice is a timely reminder of how much perspective journalists lose when our coverage is shaped by the digital world—to the exclusion of what goes on offline. I include myself. During my decade at The Atlantic, I have reported using the internet almost daily, the phone frequently, and the soles of my shoes least often. But the articles that I report in person invariably benefit from the extra effort. I enjoy it, too, even though as an introvert I find that it takes more out of me than most work.

Of course, a journalist’s time and a publication’s resources are finite, and a Zoom call is an adequate substitute for many sorts of interviews. In fact, there have probably never been more good reasons to survey the world via an internet connection. Among them: an ongoing pandemic, shrinking staffs and slashed travel budgets in a generally struggling media sector, and technological advances that offer cheap and increasingly sophisticated substitutes for being there in person. Plus there are many ways to add value as a journalist. A few of the best writers and most incisive thinkers I know seldom leave their chairs for work purposes.

Still, I worry that with every year that passes, the typical media outlet is staffed and managed by more people who’ve never worked a traditional shoe-leather beat. I worry because, to counter cratering public trust in the press, we might need to be less online—not in our distribution model, but in our outlook. While no one will argue against the value of in-person reporting for foreign correspondents or food critics, in-person conversation is underrated, I think, for journalists who do opinion and analysis. It is standard practice to invest in travel to gather facts, but unusual to send anyone out into the world to avert bad takes.

Why? Like most internet users, those of us who write, say, political and cultural analysis can easily forget how much social-media platforms distort our reality.

Text mediums deprive us of cues like facial expressions, posture, and vocal inflections. They are especially ill-suited to figuring out what people who aren’t adept at writing actually believe or intend to express. And tech giants put a thumb on the scale through algorithms that prize engagement. So when gathering information online, we see a disproportionate share of inflammatory content. We are shown the dumbest rather than the smartest posts from rival political or ideological factions. Journalists who survey American politics and culture over the web alone probably perceive a darker reality, on average, than journalists who survey the country offline. Commentators are more likely to confuse online trolls and offline normies if they seldom see the latter in person.

I speak partly from experience. I started out in journalism on a traditional municipal beat at a local newspaper, covering a region that was mixed in class, race, and party affiliation. That job gave me insights that I could draw on later, while blogging behind a desk. A controversy would arise, and I’d often think of people whom I’d gotten to know in the city I used to cover who would come down on opposite sides of an issue. The exercise disabused me of facile assumptions I was tempted to make about what a candidate’s supporters or a certain policy’s proponents “must” think.

To interact with people in person is to see how complicated most of us are. But perusing the opinion press during elections, or amid any polarizing controversy of the moment, one finds perfectly intelligent commentators insisting that Republican voters are just trying to uphold white supremacy, or that the left just wants America to fail—even though, walking out one’s door, one is hard pressed to find anyone who says that they want to restore Jim Crow or bring down the USA.

Neither would the most alarmed takes about the Covington Catholic boys or the kneeling NFL players have survived a brief chat with five or six of them. To do so is to see that these people are normal enough, not a threat to all that is decent.

I’ll admit: I haven’t gone door to door—or QB to kicker—to check up on every assertion I’ve made. No one can. The point isn’t that all journalists should report every article or conduct every interview in person, but for all of us to get offline at least often enough to remember how the world looks from other vantages. In a couple decades of reporting, I have asked hundreds of Americans face-to-face why they were voting or voted the way they did in various elections. Most answers are multifaceted, many are quirkily surprising, and some are weirdly incomprehensible. Voters are complex, emotional, and, often, disconcertingly uninformed. And I suspect that pundits would refrain from treating whole coalitions as monoliths and make fewer sweeping assertions about what elections must mean if they talked to more typical voters. As for cartoon villains, I haven’t met one yet, and only a few people came close.

Still, I need refreshers as much as anyone. When the pandemic began, I didn’t do any in-person reporting for a year. Writing about higher education, I could still reach sources. Many of them had more time than ever. But I couldn’t wander around a campus surveying whoever would talk about the state of things, giving me new ideas for future stories or perspective on how many or how few students were even aware of whatever matter I was intending to write about. Online reporting, where one can often pinpoint exactly who or what one is seeking, is complemented by the comparative inefficiency of offline reporting, which offers unexpected encounters with people who don’t know what’s on Twitter and couldn’t be interviewed online because they have no interactions there.

After I got vaccinated and began to travel, first to a half-dozen states, then to Germany, Greece, and France, I wasn’t intending to update my thinking on the coronavirus pandemic, which I’d been reading about exhaustively for months, reporting on here and there, and conversing about with many Americans of many perspectives.

But it wasn’t long before I realized that I’d been making a mental error: In thinking through how Americans were responding to COVID-19, I had been overestimating the importance of U.S. culture and politics and underestimating the role of human psychology. As I observed pandemic measures abroad and spoke to various Europeans, I saw how similar the debates and controversies they were experiencing were to American domestic discourse. I’d spent hours thinking about why folks with MAGA hats were having anti-vaccine rallies in Huntington Beach, California. I couldn’t help but think of it a bit differently when, one rainy afternoon in Berlin, I was suddenly and unexpectedly surrounded by an anti-vax rally that was tying up traffic for miles.

In that instance, I felt chagrined: I read a fair amount of international news, and social media is international. I shouldn’t have had to sit around a table drinking pints of beer with Berlin lawyers to learn that, just like parents whom I know in L.A., they were displeased with the way their kids’ schools had handled the pandemic. But I did. To see whatever you’re unable to see at home, there’s no substitute for leaving.

And what about you?

Today, if a few thousand people are reading your posts or tweets, you have a readership comparable to that of a small-town newspaper columnist. Are you taking the same care with your claims that you’d expect of that journalist? We could all get out more and learn from conversations with people who are not like us. If you’re making sweeping declarations about, say, GOP voters or progressive social-justice activists without having ever met or talked to any, you’re likely getting something wrong. Whether you’re reaching people through the media or social media, the consequences are fueling polarizing anxiety among some and losing the trust of others.

Humans evolved to communicate in person. That is how many of us understand best and are best understood. So before drawing conclusions about any group of people, we should all strive to make sure we’ve talked with some of them face-to-face. You don’t have to be a reporter to do shoe-leather reporting. As Pope Francis put it, “All of us are to be witnesses of the truth: to go, to see, and to share.”