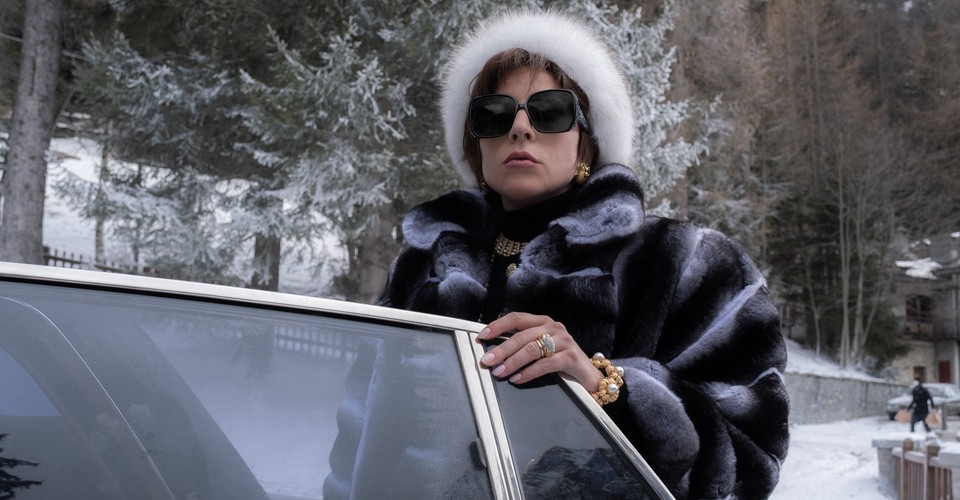 In House of Gucci, opulence is not always alluring. But Ridley Scott’s new movie takes its time before delving into the insidious, gilded world of the Italian luxury label. The film, which charts the turbulent marriage of the fashion heir Maurizio Gucci (played by Adam Driver) to the ambitious Patrizia Reggiani (Lady Gaga), instead opens with the pair’s gentle romance. He’s a law student who wants nothing to do with his family fortune; she’s charmed by his bashfulness—though also intrigued by his name. Finally he takes her to meet his father, Rodolfo (Jeremy Irons).

Viewers might expect the scene to offer a seductive glimpse into the lucrative life of Gucci’s co-owner. But even though Rodolfo’s apartment is impressive, with high-end art adorning the walls, Scott films it like a tomb, a cavernous hideaway for a man who barely remembers how to enjoy his success. Rodolfo immediately dismisses Patrizia as a gold digger, a déclassé social climber who can’t tell a Picasso from a Klimt. He may be right to be suspicious, but he also clearly finds little joy in the empire he’s defending from her.

Read: Christopher Plummer is the reason to see All the Money in the World

House of Gucci, which is in theaters tomorrow, is a fable about Patrizia’s rise and fall from the 1970s through the ’90s, as she marries Maurizio, remains by his side when he assumes control of the company, and eventually plots his murder after their acrimonious divorce. It’s also a story about the corrupting nature of power. Although the film sometimes leans into the lavishness of its subjects—magnates who made their millions selling the notion of extravagance—Scott is always ready to remind the audience: This fabulous lifestyle exacts a terrible toll.

Scott has been making movies at a tremendous pace for more than 40 years. Many of his later efforts center on the dark side of money: Think of the cruel tycoon in All the Money in the World, or the inhumane businessmen driving the chaos of his later Alien films. Gucci is his second release in 2021, after the excellent The Last Duel, another story about how those with influence wield it to achieve their own selfish ends. The Last Duel unfolded as a clever narrative trick, telling blustery tales of medieval fighters and then peeling back their heroic guises to reveal their shortcomings. Narratively, House of Gucci is far sloppier. The film mixes biographies of several major figures together and attempts to cram enough romance, betrayal, and corporate machinations to fill a TV miniseries into one 157-minute film. Still, despite the over-the-top performances and plot twists he juggles, Scott drives his ultimate message home—that wealth is tempting yet poisonous.

House of Gucci is not quite as bleak as I am making it sound, partly because its performances are so loud that the film should probably be screened only at stadiums. Lady Gaga plays Patrizia as a wide-eyed sweetheart who transforms into someone resembling a Transylvanian countess, affecting an accent that sounds absurd until you hear the real Patrizia’s voice. Irons barely modifies his English accent to play the wan, snooty Rodolfo, while Al Pacino (as his brother Aldo) turns the chairman of the company into a charming, if gnomish, Italian mascot. Driver plays Maurizio as a finance-minded cipher amid a cast of cartoons. He’s an especially muted figure when compared with Aldo’s son Paolo (Jared Leto), a balding, buffoonish designer who is derided by the elder Guccis and speaks in an exaggerated squeak. No performance in House of Gucci is subtle, but Leto acts like he just walked off the top of a pizza box. He is so transfixingly committed to being outlandish that his prior work as the Joker almost seems naturalistic.

The film moves slowly at first, but once every character has been introduced and the many plots start spinning, a fun chaos sets in. The various Guccis backstab and try to outmaneuver one another. They wade through company debates, scurrilous financial activity, and occasional profligate spending. But much of the philosophical push and pull in House of Gucci is over what sort of future the brand should pursue—either staying in the burnished hands of the elder family statesmen or trying to compete on a global scale. Snobs like Rodolfo understand that their success is rooted in perceived classiness, while forward-thinking numbers men like Maurizio get that branding alone might not sustain them forever.

The question is interesting, but Scott frames the story so the viewer knows that tragedy lies at the end of every big argument. He shoots the entire movie with the same dark blue palette he gave The Last Duel and All the Money in the World, casting a foreboding shadow over the lifestyles of the rich and famous. And while Gaga’s performance is certainly larger than life, she depicts Patrizia’s downfall as a tragedy—the fate of a woman who was drawn to a life of unimaginable affluence and quickly corrupted by it. House of Gucci is Ridley Scott’s angry version of a fairy tale, in which glory walks hand in hand with treachery.