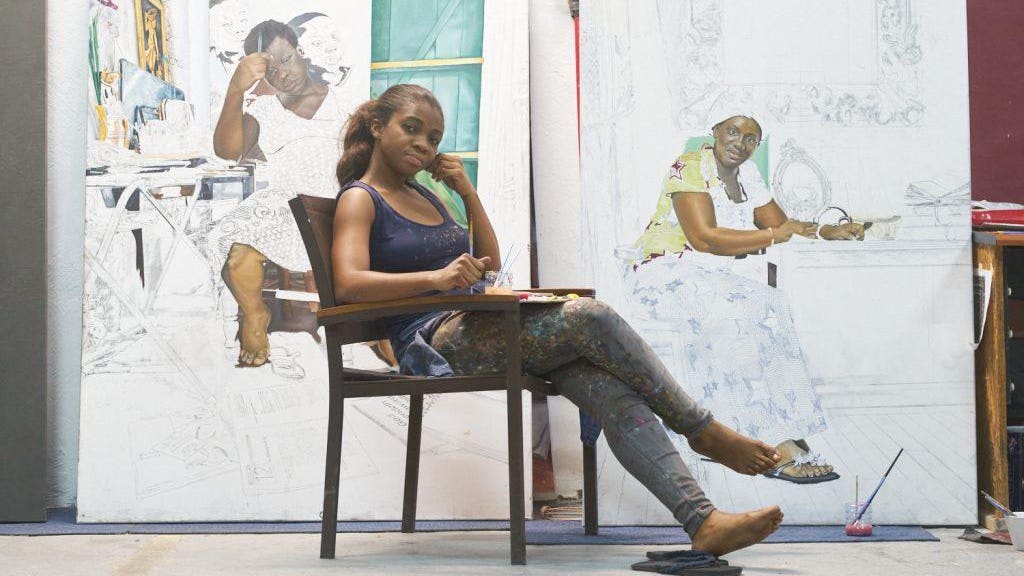 Two women sit on a bed both impeccably dressed in sage green and creamy pink, posing for a portrait. The scene looks innocuous enough, but in their eyes there’s sadness — one of the women has just said goodbye to her son in a rare meeting following her separation from his father. Friends is painted by the protagonists son, artist Arthur Timothy, and is part of the series Grandma’s Hands, which after being exhibited in Ghana’s 1957 Gallery, has led to breakout success for the artist. Centering the often overlooked personal histories of Ghanaian women, Ghanaian-British Timothy puts the female experience centre stage with paintings that feature his mother, the writer and activist Mabel Dove, his stepmother and his aunts. The images are all painted from family photographs taken in the UK and Ghana. “It was a very different time” Timothy says of the mid-century images, “my father was a journalist and editor with a difficult personality and when my parents separated, being apart from us was very hard for my mother.”. Following his exhibition in Ghana, every painting in Grandma’s Hands sold out within days to amongst others, celebrity fans, including musicians Swizz Beatz and Jay Z.

Timothy is part of a growing movement where art that centres the female experience in West Africa is gaining a much overdue new audience. Over the last ten years, the visibility of artists of colour has grown significantly, but black women artists and the crucial narratives they represent, have been left behind. This year has seen a new group of artists looking to readdress the balance and present the contemporary Ghanaian female experience.

Araba Opoku, an artist living in Accra, is part of the Noldor Art Residency where she spends her days painting large abstract canvases. In September she became the first young artist to win the Yaa Asantewaa Prize, a $6000 fund dedicated to supporting women artists in Ghana run by 1957 Gallery with a judging panel including the writer and broadcaster Afua Hirsch and Zoe Whitely, director of Chisenhale Gallery in London.

“There’s a market for art about women’s stories now” says Accra-based artist Afia Prempeh, “and you have to be aware of it.”. Speaking from her studio, Prempeh is making the finishing touches to a painting of a pregnant woman sitting on a chair by an open window. “It’s actually a sixteen year old girl” she clarifies, “I’ve known her for a while.”. The painting is one of ten canvases leaning against the walls. Another canvas shows a woman in luxurious evening wear with a stack of books behind her: “I like to paint the reality of women here in Accra” Prempeh says, “there’s such a breadth of experience, there’s no one story.”. Prempeh is in an exciting stage of her career: “I’m 35 years old and I feel like I’m finally getting the audience my work deserves”, she says.

Now living in Chester, England, the Ghanaian-Welsh textile artist Anya Paintsil has gained a rapidly growing following for her thick tufted wool portraits of women. After establishing a market for her work, Paintsil signed with the gallery Ed Cross Fine Art in London. Currently exhibiting at the blue chip gallery Salon 94 in New York, Paintsil’s woven canvases depicting herself and family have firmly established her as an artist on the rise with a wealth of collectors.

Victoria Cooke, co-director of Accra’s 1957 Gallery sees creating an audience for women artists a key business objective for 2022, establishing the Yaa Awasi prize to nurture the new generation of Ghanaian women artists. In lieu of consistent government support for the arts in Ghana, the arrival of galleries such as  ADA Contemporary Art Gallery founded by Adora Mba have also created a warm environment for women artists to flourish. Mba represents largely female artists including Deborah Segun, Emma Prempeh and Zandile Tshabalala.

“There is no support from the government so it really falls into the hands of organisations, galleries and foundations to support this new generation of artists”, says Sonia Lawson, founder of the Palais de Lomé art space in Lomé, Togo. After feeling a frustration at the lack of support for artists in West Africa, in 2019 Lawson took matters into her own hands and set up Palais de Lomé, a space which holds exhibitions of West African artists.

Since founding 1:54 Contemporary African Art Fair in 2013, Franco-Moroccan entrepreneur Touria El Glaoui has promoted the work of West African artists, pushing women to the forefront. El Glaoui sees West Africa as an essential place for women artists to nurture their talent, “Across the [African] continent it’s a different story to the international market”, she says, “of the top five African artists from the continent, three are women, and they are still alive, including Julie Mehretu and Marlene Dumas.”

This platforming of women is important to Timothy. “I was very interested in the lives of the women I saw in these old family photos” he says, “the photographs made me view these women in a different way to how I had perhaps viewed them in real life.”. In Timothy’s paintings, there’s a clear respect for women, as he puts their overlooked narratives centre stage as a historical document. In Mabel Dove, Timothy paints his aunt, the journalist and activist Mabel Dove, who blazed a trail as one of the first West African women to work in these fields with a reverence that establishes her with the new, younger audience that Timothy’s work has gained. Speaking after a long day of work at her studio, Prempeh talked of the impact on Ghanaian artists in seeing paintings such as Mabel Dove — “You don’t see a lot in paintings of women from Ghanaian modern history” she says, “It’s very inspiring to see these images that Arthur has painted of powerful women with real humanity.”.