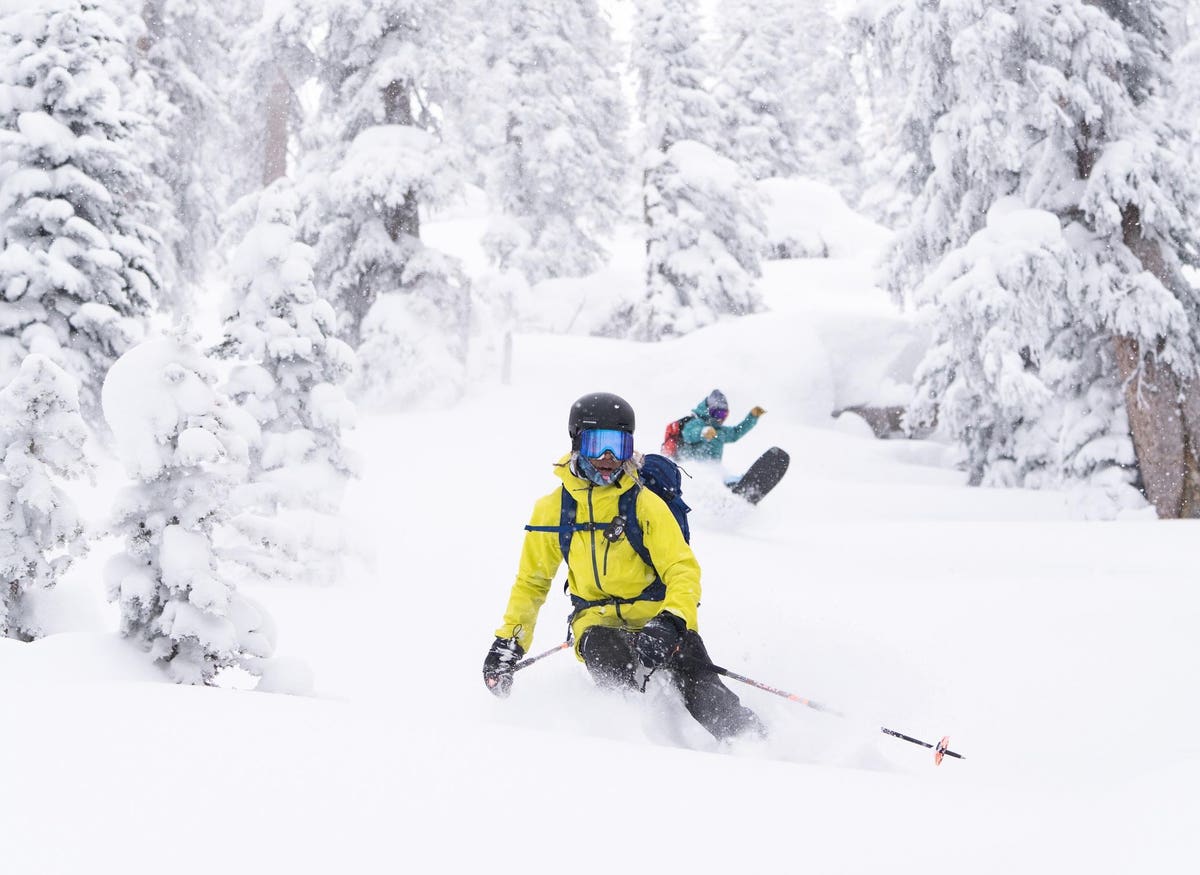 The helicopter thumped to a halt on the snow-covered peak of Denali. There, four skiers stepped out from beneath its blades. In the blink of an eye, they were screeching downhill—plunging over snowfields in a vertical dance with powder and gravity.

For freeride skiers and snowboarders, the scene is nothing new. The portrait is a symphony of sunlight, snaking lines and snowflakes that creates some of the most visually stunning cinematography in the outdoor world. Filmmakers have flocked to the sport for years, drawn in by the allure of unspoiled snow, big air and high risks. Athletes meticulously plan routes, hoping for the perfect blend of snow, sun and cloud conditions to immortalize their run on film.

Most of those films feature a male dominated team of daredevils in leading roles as able-bodied adventurers serving as their own stunt doubles. But this scene atop Denali? This was different. This was part of a pioneering production stretching from Wyoming to Alaska meant to connect a broader spectrum of people to the snow. The film, called “The Approach,” focuses on adaptive athletes, people of color and women shredding lines the envy of snow sport enthusiasts worldwide.

“The idea was to make a ski and snowboard film that showcases the ability of all the athletes,” says executive producer and big mountain icon Ingrid Backstrom. “We wanted to get together as a group and help elevate each other within that space, to collectively throw out our elbows to make more room.”

An X-Games gold medalist and five-time Powder Awards winner for Best Female Performance, Backstrom has been a torchbearer for women athletes in the backcountry for nearly two decades. And while the film follows Backstrom’s internal battle to juggle the responsibilities of motherhood and the visceral drive to ski the backcountry, the 16-year veteran says she wants her legacy to open doors for people of all backgrounds.

Those doors include people like 25-year-old Brooklyn Bell, who journeyed to Alaska alongside co-star Emilé Zynobia to heli-ski above the glaciers of Chiklat Inlet. There, the two women encountered awkward social scenarios—like people asking to take photos with them—en route to some of the most stunning ski areas in North America.

“There are not many Black women who get to heli-ski Haines, Alaska,” says Bell. “The terrain there is bigger and badder than anything I’ve ever seen in my life. There is snow forming in places I have never seen. There are massive glaciers. It’s out of this world.”

Bell says she often feels anxious as a Black woman in a white-dominated sport. That she feels a need to beat people’s inherent bias when she’s on the slopes. But the backcountry is a place to leave some of that worry behind. “The feeling of floating on powder and going fast, it’s like a blank canvas where my creativity just flows. When I’m out there filming, I’m like a kid in a candy store.”

For adaptive athlete Vasu Sojitra, who climbed and skied Denali in 2021, “The Approach” strikes a similar chord. “Denali was this untouchable mountain in my eyes,” he says. “I had never seen anyone that looked like me try to give climbing it a go. So, I didn’t know it was possible until I was invited to join.” In the film, Sojitra describes his mission to normalize his disability, as able-bodied teammates shred alongside—and often behind—the outriggers he uses to tackle some of freeriding’s most legendary peaks.

“We live in a time where disabled people aren’t always elevated and celebrated,” says Sojitra. “For the most part, they are usually pitied and looked down upon. We are trying to move away from that and show that disabled people are here and doing these things. We don’t need to doubt their abilities.”

Those abilities, according to big mountain snowboarder Leanne Pelosi, can take years to master but are almost limitless. “The backcountry is truly one of those places where you have to be self reliant,” says Pelosi, who’s spent 15 years plunging down remote peaks. “You have to be able to get yourself out of the backcountry if something goes wrong, so there’s a lot more risk involved. But when you play the odds, do something really cool and come back in one piece, it feels really good.”

The creative freedom of the powder, the thrill of achieving an impossible goal and the rush of soaring down the perfect line in the untouched wilderness are all on display in “The Approach.” After a cross-country film festival tour, the film is available for streaming for free on Youtube via The North Face now.

The producers wish to acknowledge that “The Approach” was filmed in the traditional, unceded territory of the Coast Salish, Nooksack, Nuwhaha, Ktunaxa, Shuswap, Okanagan, Tlingit, Shoshone-Bannock, Crow, Squamish, Cheyenne and Sinixt Nations.