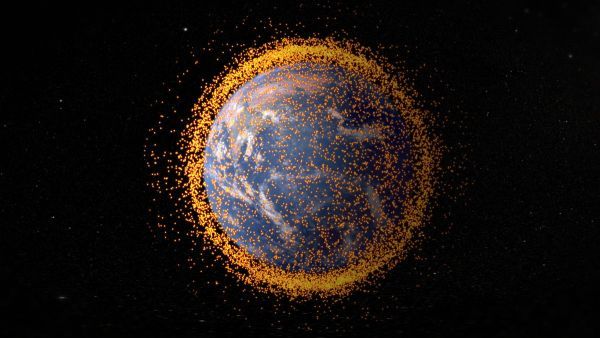 Across the globe, nations and space companies alike are speaking out about Russia’s anti-satellite (ASAT) test that forced astronauts in space to take cover.

On Monday (Nov. 15), the seven astronauts and cosmonauts living on board the International Space Station were forced to take shelter in the spacecraft they flew to the station. The orbiting lab was passing through a cloud of space debris that threatened the station and its inhabitants. Later that day, the U.S. State Department revealed, with confirmation from the Pentagon, that the space debris — which will be trapped in orbit for years to come — was the result of a Russian anti-satellite test.

The test, which saw a missile destroy Cosmos 1408, a defunct Soviet satellite, has now drawn criticism from nations around the world, including Japan, Australia and South Korea, and private spaceflight companies including Virgin Orbit. These statements follow stark criticism of the test from the U.S. government as well as NASA Administrator Bill Nelson.

“In addition to destroying the fragile space environment, this kind of sabre rattling is a clear reminder that the space infrastructure we rely on for our economy, for science, and for national security is threatened by human aggression,” Virgin Orbit VEO Dan Hart said in a statement.  “Virgin Orbit joins with the broader space community to universally condemn this destructive and irresponsible act,” the company added.

The Commercial Spaceflight Federation also spoke out about Russia’s actions in space. The organization, which represents the commercial spaceflight industry with over 90 member companies, stated that it “strongly condemns the deliberate destruction of satellites endangering humans in orbit and other spaceflight activities.”

Japan also spoke out; the nation’s foreign ministry called the test “an irresponsible behavior that undermines sustainable and stable use of outer space,” according to a Nov. 18 statement, as reported by SpaceNews.

The ministry added that Russia’s test “runs counter to the Space Debris Mitigation Guidelines,” which was put together by the Inter-Agency Space Debris Coordination Committee (IADC), and unanimously adopted by the member states of the United Nations Committee on the Peaceful Uses of Outer Space (COPUOS). With these guidelines in place, member states are mandated to avoid intentionally destroying space objects in orbit that could create space junk that would stay in orbit long-term.

“The Government of Japan expresses concerns towards the test and calls upon the Government of Russia not to conduct this kind of test in the future,” Japan’s ministry added.

Australia also spoke out, with Peter Dutton, the nation’s defense minister stating that the test was “a provocative and dangerous act that demonstrated the threats to space systems are real, serious and growing,” according to the same report.

“The world increasingly relies on space for security, public safety, communications and commerce,” Dutton said in a Nov. 17 statement, SpaceNews reported. “This test by Russia, combined with other recent counter-space weapons testing, calls into question Russia’s sincerity in promoting security in space.”

Australia’s minister for foreign affairs, Sen. Marise Payne, added in the same statement that “Russia’s actions are not those of a nation committed to ensuring the peaceful use of space nor the prevention of an arms race in outer space.”

South Korea’s foreign ministry has also spoken out about the event. According to a report from SpaceNews, the ministry said that “we are concerned about the anti-satellite weapon test that took place Nov. 15 and in particular numerous pieces of debris created in space as a result of the test.” They added that there is a need for “all nations to act responsibly in space to ensure peaceful and sustainable use of space, and work together to advance related international rules.”

China has yet to make an official statement about the ASAT test, but, according to SpaceNews, during a Nov. 16 news conference, China’s foreign ministry spokesperson Zhao Lijian said that “we noted relevant reports and that Russia has yet to respond. I think it is too early to make any comment.”

China has also previously found itself as the target of criticism for conducting an ASAT test in 2007.

“The threat posed by anti-satellite weapons has steadily grown since 2007, when China performed a similar test and created a similar debris field that is still being tracked today,” Virgin Orbit said in the same statement.