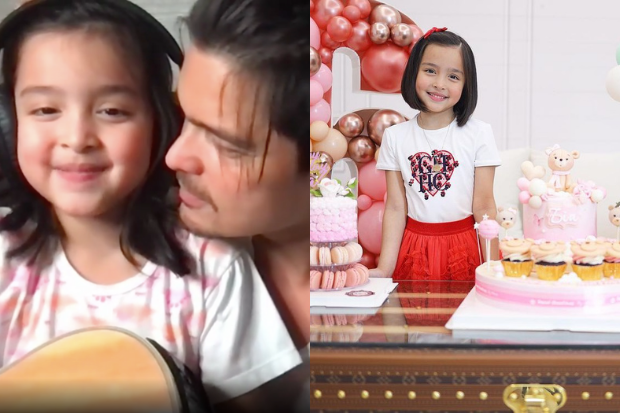 Dingdong Dantes showed off his daughter Zia’s singing skills as he marked her sixth birthday, the first birthday celebration that he did not get to attend.

The actor, who is reportedly preparing for an upcoming project, wrote an open letter to his daughter while showing a video of her singing Elvis Presley’s “Can’t Help Falling in Love,” on his Instagram page today, Nov. 23.

“Dear Z, for the last six years, this is the first time that I did not have you under my armpits for this long,” he addressed his daughter.

Dantes admitted it has been hard for him to be away from his family, though he finds peace knowing that Zia is safe with his wife, Marian Rivera, and his youngest child, Ziggy. He then expressed gratefulness for being “gifted” with his daughter while also hoping she would understand why he had to be away for her birthday.

“Happy [sixth], Ate Z. When you’re a bit older, I hope you’ll understand why Dada isn’t with you on this special day,” he greeted Zia. “For now, I’ll just have to play this over and over till I have you back under my armpits again.”

“Ate Z turns [six]! My precious daughter, may you continue to be a loving, sweet and kind girl. You’re such a blessing to everyone around you,” the actress said. “We miss you dada. Wish you were here to celebrate with us but thank you for working hard for us. We love you, anak (my child)!”

Zia received greetings from her parents’ fellow celebrities including Iza Calzado, Cherry Pie Picache and Angel Locsin, among others. She also received a gift from a luxury brand, as shown on Rivera’s Instagram Stories today.

Rivera and Dantes welcomed Zia in November 2015, while Ziggy was born in April 2019. The couple, known as GMA’s primetime king and queen, tied the knot in December 2014 in a ceremony dubbed the “royal wedding.” /ra

LOOK: Dingdong Dantes, Marian Rivera get ‘sinovaxed’ together in Taguig