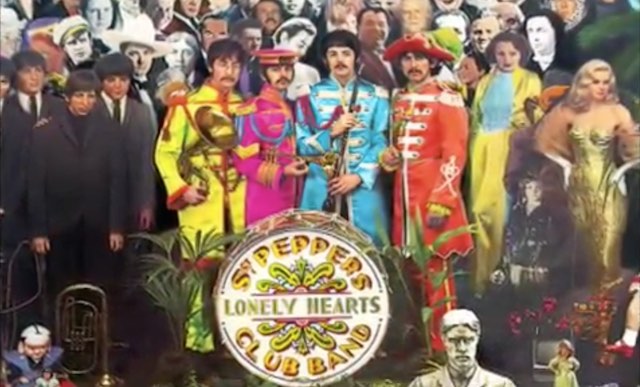 55 years ago today, The Beatles began recording sessions for their eighth studio album Sgt. Pepper’s Lonely Hearts Club Band—probably the most important and influential rock and roll album ever produced.

Knowing they would not have to perform the tracks live because they had just retired from touring, they adopted an experimental approach to composition and recording. The innovative recording of the album bu producer George Martin and engineer Geoff Emerick included the liberal application of sound shaping signal processing, the use tape loops, and a 40-piece orchestra.

Hitting record stores on June 1, 1967, Sgt. Pepper’s was an immediate success—#1 on UK album charts for 23 weeks, and in the US for 15 weeks. The LP won several Grammys, and Rolling Stone magazine ranked it as the “Greatest Albums of All Time”.  WATCH a video about its creation… (1966)

And, 153 years ago today, Scott Joplin, the African-American composer and pianist dubbed the “King of Ragtime,” was born in Texas to an ex-slave. One of his first and most popular pieces, “Maple Leaf Rag”, became ragtime’s first influential hit, and is still instantly recognized today.

Especially after his father left the family, the Joplins struggled financially, but 11-year-old Scott was tutored in music for 5 years free of charge by German-Jewish music professor Julius Weiss after Weiss recognized the family’s extreme poverty and the boy’s unique talent. Before he died at age 48, Joplin wrote 44 original ragtime pieces, a ragtime ballet, and two operas (one of which, Treemonisha, was finally produced in full, to wide acclaim, in 1972).

His music was repopularized in the Oscar-winning film The Sting that featured several of Joplin’s compositions, most notably “The Entertainer”.  In 1976, Joplin was posthumously awarded a Pulitzer Prize. (1868)

26 years ago today, Ireland narrowly voted to legalize divorce, ending a 58-year-old ban. The Catholic Church was strongly against the amendment, but told their congregations that they could vote for the amendment in good conscience, and it would not be a sin to do so. The referendum was passed 50.28% to 49.72% and became the Fifteenth Amendment of the Constitution of Ireland. (1995)

Happy 79th Birthday to Billy Connolly, the Scottish comedian, musician, who was knighted at Buckingham Palace for his services to entertainment and charity.

Born into poverty and abandoned by his mum at age 4, Connolly found great joy in making people laugh. As an actor, he starred in A Series of Unfortunate Events, Brave, Mrs Brown, The Boondock Saints, and The Hobbit: The Battle Of The Five Armies. He was diagnosed with Parkinson’s disease in 2013. (1942)

162 years ago today, the British naturalist and geologist Charles Darwin published On the Origin of Species explaining his theory of evolution. The first edition—which has been voted by publishers and librarians as the most influential academic book ever written—introduced the scientific theory that populations evolve over the course of generations through a process of natural selection. It presented a body of evidence that the diversity of life arose by common descent through a tree-like branching pattern of evolution. Darwin included evidence that he had gathered on expeditions to South America in the 1830s and his subsequent findings from research and experimentation, and showed how natural selection is a scientifically testable mechanism.

Within two decades widespread scientific agreement solidified that evolution had occurred, and by the mid-20th century Darwin’s concept of evolutionary adaptation through natural selection became central to modern evolutionary theory—and the unifying concept of the life sciences.

Modern evolutionary theory continues to develop, but his writings still explain the diversity of living organisms and their adaptation to the environment; makes sense of the geological record; and hold up under modern genome analysis.

Because of church teachings at the time, his theory was much maligned, but clergymen later came to accept natural selection, explaining it as an instrument of God’s design. The Vatican stated its official position in 1950, which held that evolution was consistent with Catholic teachings. Darwin, himself, believed at the outset that God had been creating life through the laws of nature. WATCH an animation about how little finches were crucial to his discovery, and how pepper moths evolved due to pollution… (1859)