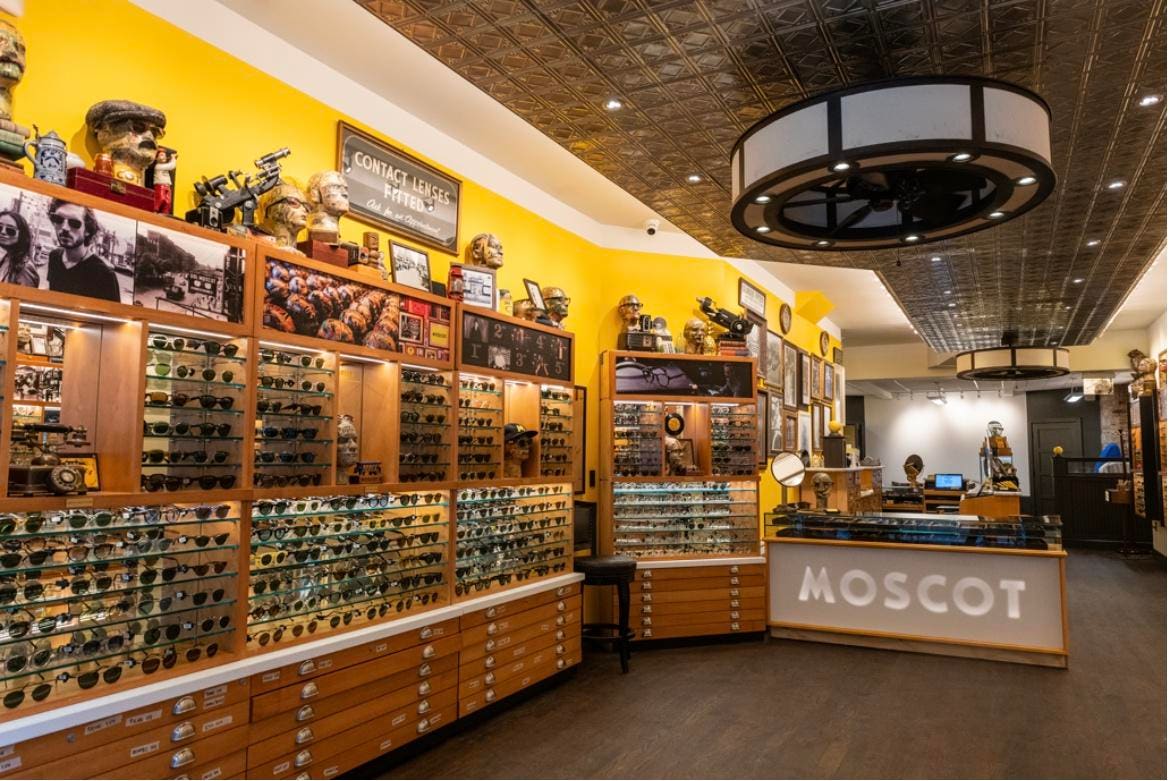 After 106 years, MOSCOT, the eyewear institution founded in a pushcart on Orchard Street at the turn of the 20thcentury, will no longer be paying rent. The Fourth and Fifth generation run family-business has grabbed a slice of New York real estate and relocated the brand’s flagship store to 94 Orchard Street. While this marks the fourth location on the Lower East Side, it’s the first time owning the building that houses the enterprise. As the optical empire further cements roots in the famous immigrant-tenement-turned-trendy-food-and-shopping district, its global reach is expanding with a store opening during the pandemic and two more international locations set to open next month.

“Our DNA is here on Orchard Street,” says Zack Moscot, Chief Design Officer. He and his father, Dr. Harvey Moscot, CEO, were on hand to present the space opened just days earlier. He furthers, “Now we are at 94 Orchard Street, and my great-great-grandfather Hyman moved from the pushcart to the first store, located at 94 Rivington in 1915, so it’s like coming full circle.” The new 1,800 square foot shop also houses the optical finishing lab, and corporate headquarters.

The elder Moscot Harvey estimates that the brand may have spent millions on rent in today’s dollars. He reminds us that owning real estate wasn’t always the hot game it is today. “In the Depression, my grandfather Sol—who was one of the first licensed opticians in New York—was offered four different buildings just to take over the payments because the owners were trying to save their credit and standing with the banks.” Family lore like this and other missed real estate opportunities helped spur the decision to purchase the property.

Optical was then and is an essential business. The Moscot’s have turned it into a style destination and experience by drawing on one of today’s rarest commodities; family-owned and steeped in authenticity. It’s evidenced in the store’s designs replicated the world-over displaying handpicked antiques that once graced the 118 Orchard Street location.

Harvey’s dad Joel (third-generation son of Sol, who was Hyman’s son), was an avid collector of art and tchotchkes—banished to the store by his wife—which are now charming tableaus grouped with antique optical equipment, books and mannequin heads bearing frames. There are images of the first three Moscot generations stores and scenes from the lively commercial street throughout the store. Original tongue-and-groove chairs dating back to 1936 that served as waiting room chairs are used at the back of the shop. Wooden display trays and eyeglass storage drawers used in the first Orchard Street store are still in circulation. A decorative tin ceiling once de rigueur in Lower East Side buildings projects along the painted yellow ceiling flanked by exposed brick walls, both paying homage to old New York. It’s a recipe recreated in stores worldwide in locations such as London, Rome, Milan, Paris, Seoul, and Tokyo.

The pandemic provided both challenge and opportunity. “Covid was an enlightening time as I spent a lot of time negotiating with landlords across the world because our shops were shut and foot traffic was down 80 to 90 percent,” Harvey recalls, noting some landlords were accommodating while others wouldn’t budge. The latter was the landlord at the corner of Delancey and Orchard, where the shop was located since 2013 after spending 77 years at 118 Orchard Street.

“We moved the ‘metaphorical pushcart’ several times because we were beholden to landlords,” said Harvey. He worked for ‘beer money’ at the family business on weekends as a teen, allowing him to spend time with grandfather Sol absorbing sage wisdom about the biz. “We purchased this building to secure our fate,” Harvey adds.

Just as so much about MOSCOTs’ state-of-the-art optical business still operates like the good ‘ole days, so did the real estate transaction. Harvey mentioned to a former patient and Lower East Side property owner Mark Miller about his growing impatience with the landlord situation when Miller offered that the building at 94 Orchard, owned by an older couple who lost tenants during the pandemic, might be coming on the market. A deal was struck between the two families, and the Moscots obtained the building earlier this year.

The Lower East Side store was still the busiest of all the locations and a bit of a destination for the neighborhood that boasts one of the hottest brunch corners in NYC—Broome and Orchard—an indication there was no need to fret the move. But giving up another coveted corner location at 108 Orchard, a cornerstone of the brand for 85 years, was cause for angst among Harvey and several other family members. “My Dad Joel came in on Saturday and said, ‘How could you leave the corner? You are making a mistake.’ The previous landlord warned we would go out of business; OMG, the sleepless nights,” Harvey laments.

“The younger generation told us to relax, and that young people just use their phones; no one looks up walking down the street,” continued Harvey. To that end, the brand was well-poised for the digital evolution that became crucial during the pandemic, having upgraded the website in 2018. “We were growing digitally and investing in it, but the pandemic turbo-charged it,” notes Zack, who said their virtual try-on system works to precise scale for accurate fit. He maintains, though, that for first-time customers especially, it’s still a human touch business. Harvey points out the Retinal camera that takes a wide field retinal photo and Dr. Betsey Chin, who also treat eye conditions. “We juxtapose the most recent tech with our history.”

They had just signed the Amsterdam location when the pandemic hit but managed to open it, albeit a few months delayed. This December, two more stores will open in Toronto and Copenhagen, expanding the global reach of the 100-plus-year-old opticians. The geographical diversity was a plus for the business as regions abroad were hit at different times, some stores could still operate.

It’s clear that while there is a wholesale component to the brand, it’s not the focus, according to Zack, unless it involves a shop-in-shop in a top retail outlet. “There is only so much to do in the wholesale arena because you don’t control it unless you are willing to denigrate your brand as there are only so many A-plus stores to be in.” The Moscot in-store experience cements the affinity for the brand. The new store sits directly opposite the Tenement Museum, with history literally facing each other. Becoming landlords will ensure that history is not only preserved but thrives.