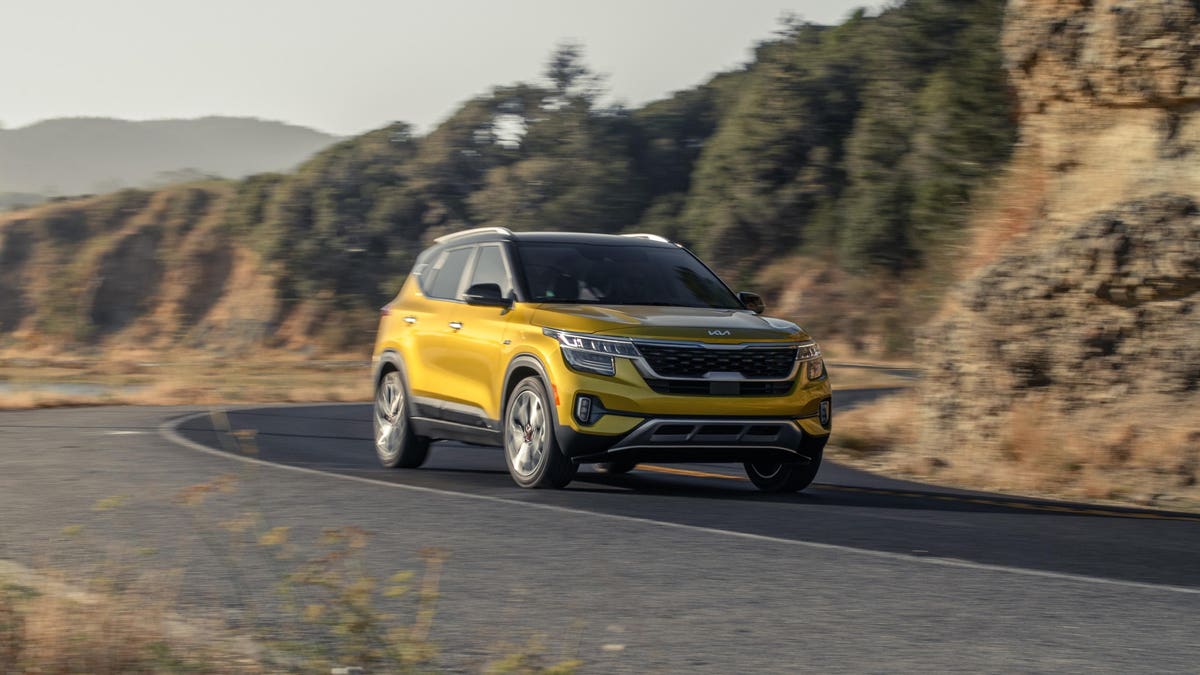 There is just a slight spread of land between KIA’s Sportage and Soul. That’s where the Seltos comes into play. It’s not certain whether some KIA executive threw a tantrum and decided all new models will start with an S. Nor if there’s a bigger marketing ploy behind the weird badging choice. Truth is, the 2022 KIA Seltos is a way better car than the name might suggest. Here’s why this subcompact SUV stands out in a very crowded segment.

It’s 4 inches shorter than KIA’s Sportage which itself is already one of the smallest in its market segment. The modest footprint doesn’t stop the Seltos from providing considerable amount of space for passengers and luggage. Thanks to its boxier design, especially along the roofline, KIA Seltos’ interior feels oddly aerated.

The raised roof line benefits cargo space as well. KIA Seltos boasts 26.6 cubic feet of space, fitting five travel suitcases and then some. Despite being one of the smallest in the game, Seltos beats other subcompact crossovers in storage space. Fold down the rear seats and the total available cargo space becomes 62.8 cubic feet.

Looking from the outside, Seltos features a simple yet attractive design, with plenty of straight lines ending in the contrasting grille at the front.

AWD all the way

The 2022 KIA Seltos comes with two engine options, locked in tightly to the trim level. Thus, the LX, EX and S trims come with a 146hp, 132 lb-ft 2-liter engine. Power figures aren’t exactly stellar for this market segment. Besides the S trim (which can be ordered in FWD), all-wheel drive comes standard on the Seltos. A CVT is paired with the engine on all trims, resulting in a 27/31 mpg (city/highway) EPA fuel efficiency.

The higher S Turbo and SX Turbo trims are equipped with a 1.6-liter turbocharged 4-cylinder engine that’s good for a healthier 175hp and 195 lb-ft of torque. The extra power output paired with a low mass makes the S Turbo and SX Turbo Seltos rather agile. AWD is also standard and power is delivered via a 7-speed DCT automatic.

The interior cuts corners and costs

With a $23,665 starting price (on the LX trim) for the Seltos, KIA had to find ways to reduce production costs. The economy is mostly felt inside the cockpit. There are no premium materials boasting around the center console or nappa leather upholstery for the seats. Still, higher Seltos trims benefit from 8-way power adjustable driver seat, Bose speakers, a 10.25-inch touchscreen that embeds plenty of tech.

Comfort features such as adaptive cruise control with automatic stop and go and semi-autonomous highway driving are available on the top end trims.

The sunroof is optional on the EX and turbocharged S, which lightens up the insides by a lot. Sadly, it cannot be acquired together with two-tone painting for the body, which according to KIA, is a construction constraint.

We may see a Seltos X-Line trim in the future, featuring an off-road package. It’s likely more for the show rather than actually posing a threat to settled names in the branch, such as Jeep and Subaru.

Overall, KIA Seltos fits in a small yet crowded segment gap of subcompact crossovers. With plenty of power from the turbocharged unit, ample space and a rather low kerb weight, only thing that might be missing from the mix is a more inspired name. Aside of that, the 2022 KIA Seltos checks all the boxes.