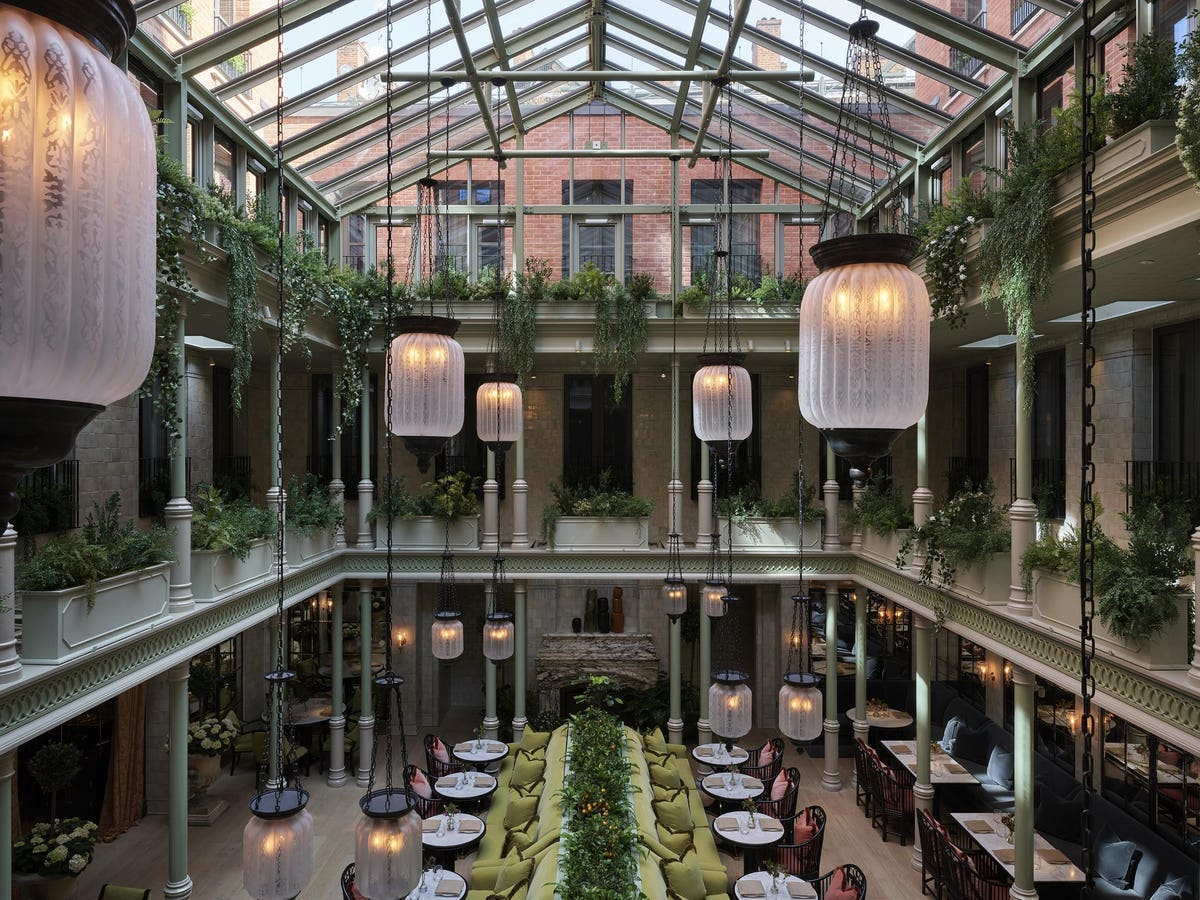 While quarantine restrictions and the battle against the Delta variant curtailed visits by international travelers to the United Kingdom over the last year, the hotel scene there was far from dormant. A number of hotels opened in the last few months especially in London; others are still in the pipeline for development.  And now with the borders opened to vaccinated travelers without quarantine (just proof of vaccine and a negative PCR test at present time although if this year has taught us anything, it’s that everything can change in a moment), frequent visitors to the U.K. have new options to check out in the capital city.

The Guardsman This intimate—just 53 rooms-hotel opened last October just down the street from Buckingham Palace. Given its small size and plush, design-forward décor, it feels more like a members club than a hotel with facilities for guests including a drawing room, library and dining room with frequently changing menu. There are also six one to three bedroom self contained apartments with kitchens, dining areas and work spaces that would be suitable for longer stays—private chefs and valets also available.

Nobu Hotel London Portman Square This international hotel brand and restaurant (which naturally is on premises) is located in the heart of Marylebone. The 249 rooms and suites have an overall serene, Japanese motif with neutral color schemes of taupe, gray and beige, natural woods and black and white line drawings. There is also an emphasis on wellness with special bespoke treatments unique to the property, visiting experts and Nobu Pilates, a blend of classic Pilates and high intensity training.

NoMad London This brand known for its quirky design opened in a Grade II listed building, the former Bow Street Magistrates’ Court and Police Station, in May and was quickly named the coolest hotel in town. Architectural details of the 19th century building are incorporated into the 91 rooms designed by New York designers Roman and Williams along with lush fabrics such as velvets and silk brocades in gold and royal blue and intricate vintage chandeliers. 1600 works of art are also displayed throughout The restaurant set inside an atrium with a soaring glass ceiling became a prime gathering spot immediately upon opening, as did the bar raffishly titled Side Hustle set inside the former police station, also the setting of the new Bow Street Police Museum. Common Decency, a subterranean craft cocktail bar is set to open next year.

The Mayfair Townhouse This sibling to esteemed country house hotels Cliveden and Chewton Glen occupies a row of townhouses in prime Mayfair location Half Moon Street, the street known for its residences of upper crust gentlemen detailed in the works of Oscar Wilde and P.G.Wodehouse. Bertie Wooster would be right at home here in the 172 ornate rooms, classical but with a twist of whimsy and intense color. There’s a definite rich, masculine tone in the dark walls, black furniture and gold accents in spaces such as the appropriately named Dandy Bar. And the promise is to provide all of the insider access to top restaurant tables and exclusive events that the more established hotels have with a well connected concierge.

Mondrian Shoreditch London This international brand returned to London in early August in edgy east London’s Shoreditch after taking over and redoing the former Curtain Hotel. The 120 rooms and suites are minimalist, a mix of white brick walls, neutral color schemes and contemporary furniture, but the common areas are an exuberant display of vibrant colors and cutting edge design. Making the hotel a gathering spot is apparently an emphasis with a screening room, the private membership Curtain Club and its restaurant Altitude, rooftop pool and Design Studio co-working space. It’s also the site of Bibo Shoreditch, Michelin three star Andalusian chef Dani Garcia’s first foray into London.

The Londoner The opposite of an intimate hotel, this 350 room hotel is set to open in September near Leicester Square in the city’s West End. Even though the scale is massive, the design is meant to invoke a cozy, residential feel with overall beige tones and contemporary, curved furniture. The standout, though, is the 2153 square foot Tower Penthouse Suite, a duplex with floor to ceiling windows unveiling a wraparound view of the city’s panorama. If you take the penthouse, you also receive certain amenities such as a guaranteed table at the hotel’s six restaurants, a secret VIP entrance, private chauffeured car for airport transfers, silk pajamas and an in room mixologist.