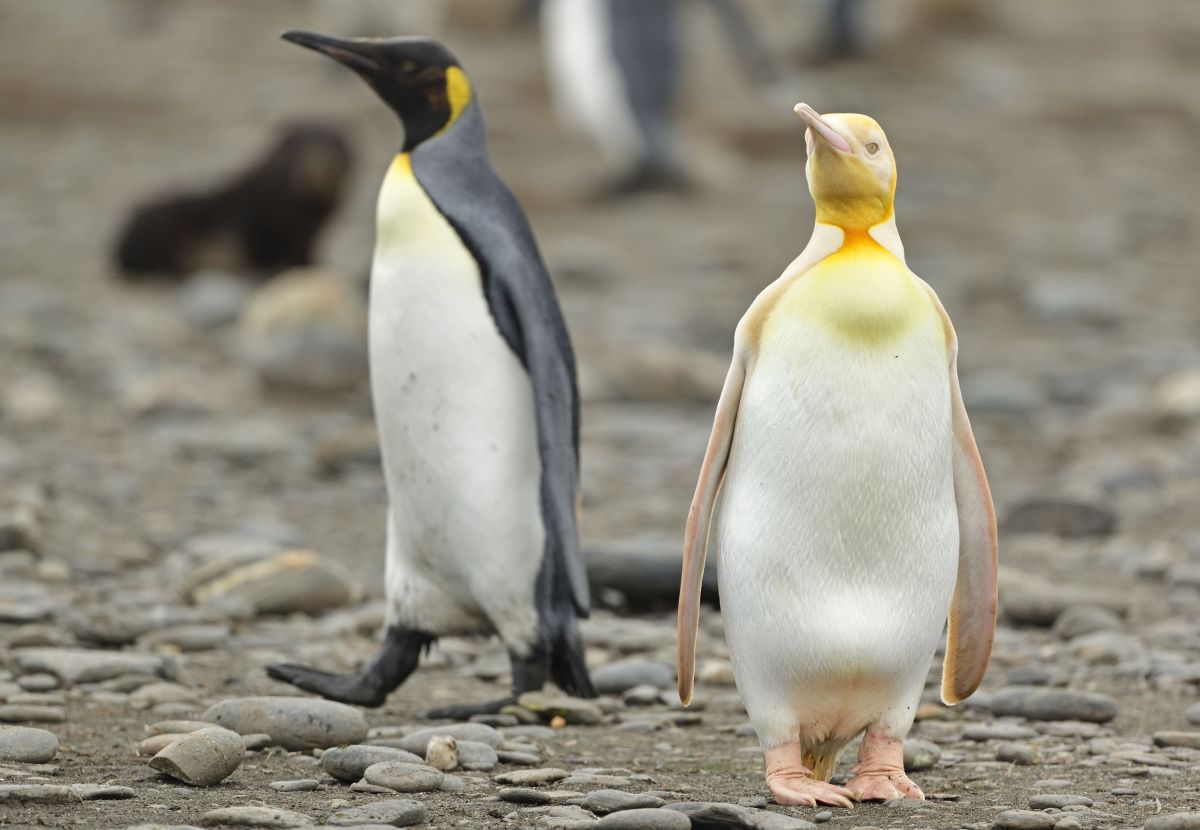 In most major animal groups, there have been documented instances of individuals with white or unusually light coloring in species that are not typically white. These strangely colored animals are very rare, and some cultures consider them signs of good luck or as having healing properties in traditional medicine, thus making these individuals extremely valuable to poachers.

There are two main conditions that cause non-white animals to be born white or another unusual color: albinism and leucism. Both conditions affect an animal’s ability to produce melanin, a skin pigment that gives animals’ skin, hair and eyes their color, which is present in some amount in most animals. Albinism is a genetic condition that prevents melanin production in every cell in an animal, resulting in a total loss of color. Leucism affects individual pigment-producing cells, so it can cause either total or partial color loss or change.

2021 was an unusual year for stories about albinism and leucism. Normally, just one or two of these animals make the news each year, but in 2021, there were plenty that grabbed our attention.

Whale watchers in Japan were treated to a rare wildlife encounter when they saw a pair of white killer whales swimming alongside each other. The duo was spotted July 24 by a group aboard a Gojiraiwa Kanko Whale Watching boat off the coast of the island of Hokkaido.

“The homogenous creamy yellowish coloration in these killer whales would indicate albinism,” Erich Hoyt, a research fellow at Whale and Dolphin Conservation in the U.K., told Live Science at the time. However, it is not possible to tell for sure without genetic samples, he added. The scratch marks, also known as rake marks, on the white orcas are the result of play fighting. All killer whales (Orcinus orca) have these marks, but they do not show up against the orcas’ black skin.

Albinism in killer whales is the result of inbreeding within groups of resident orcas, or populations that live in small groups that do not interact with other populations. “Roughly 1 in 1,000 orcas in the western North Pacific [are white],” Hoyt said. “That is probably the highest ratio anywhere in the world.”

A study published in July documented an unusual case of infanticide in a chimpanzee troop in Sierra Leone in 2016, when a newborn albino chimp was killed by adult males in its own group.

Researchers did not witness the actual murder of the albino baby, but they did see a buildup in aggressive behavior between certain males and the chimp’s mother in the lead-up to the infant’s death. When researchers eventually found the albino chimp’s corpse, it was missing an arm — a finding that suggests  the baby was killed by one of the troop’s males.

The researchers were not sure why the males killed the baby. Its lack of color was the most obvious possible explanation. However, infanticide is unusually common among chimpanzees (Pan troglodytes), so they may have had another motive, according to the researchers.

Sailors aboard a Dutch gas tanker spotted a rare white sperm whale (Physeter macrocephalus), like the one depicted in the literary classic “Moby Dick,” off the coast of Jamaica on Nov. 29. The captain of the ship captured a short video that showed a brief glimpse of the ghostly cetacean near the ocean’s surface.

“We don’t know how rare white sperm whales are,” Shane Gero, a sperm whale expert at Dalhousie University in Canada and founder of the Dominica Sperm Whale Project, told Live Science at the time. White sperm whales have been occasionally spotted in the past, but they are hard to track and study because of their ability to dive deep into the oceans for long periods of time.

“The whale in Jamaica is very white, and my guess is it’s an albino — but that’s just my guess,” Gero said. The only way to tell for sure would be to take genetic samples, he added.

This summer, a pair of albino alligators hatched at Wild Florida Safari Park in Kenansville, Florida. This did not come as much of a surprise, however, considering both of the baby’s parents were also albino.

These particular babies and their parents are descended from albino alligators that were found in a nest in Louisiana in the 1990s. Years later, an alligator farm in Florida bought the rights to harvest the nest.

“It’s kind of like designer alligators: You can buy a regular alligator, if you’re licensed, for $50, or you can buy an albino for $15,000,” Joe Wasilewski, a wildlife biologist and member of the International Union for Conservation of Nature crocodilian specialist group, told Live Science.

The albino alligators are susceptible to health conditions, such as severe suburning that can kill them. This means they must be kept in specially controlled conditions.

Wildlife photographer Yves Adams captured some amazing images of a yellow king penguin (Aptenodytes patagonicus) on South Georgia, a remote island in the southern Atlantic Ocean, in 2019 and shared the images with the world for the first time in February.

“I’d never seen or heard of a yellow penguin before,” Adams told Kennedy News and Media. “There were 120,000 birds on that beach, and this was the only yellow one there. We all went crazy when we realized. We dropped all the safety equipment and grabbed our cameras.”

Scientists are unsure exactly how the yellow coloration came about, but they think it is a form of leucism. All king penguins produce small amounts of this yellow pigment naturally, but in this individual, it seems to be the only pigment the animal could produce.

A rare white tiger cub was born in a Nicaragua zoo in early January. Unfortunately, the baby tiger, named Nieve (“snow” in Spanish), was rejected by its mother, so the cub was initially raised by humans.

Unusually, both of the cub’s parents were orange Bengal tigers (Panthera tigris tigris). So how could two orange tigers produce a white cub? A genetic mutation responsible for the tiger’s whiteness is recessive, meaning an individual must have two copies of that version of the gene for it to be expressed. Both tiger parents had only one copy of the mutated gene, which is why they were orange, but both passed on the recessive trait to their cub.

The recessive gene mutation means that white tigers cannot produce the red and yellow pigments that give tigers their orange color. However, white tigers are still capable of producing black pigments. This means the condition is neither albinism or leucism, but it has a similar effect.

In October, professional angler Martin Glatz caught a bright-yellow catfish in a lake in the Netherlands. “I have never seen such a catfish before,” Glatz told Live Science. “I am still overwhelmed by it.” After taking pictures with the banana-colored behemoth, he released the fish back into the lake.

The massive fish is a wels catfish (Silurus glanis), a large species that’s native to lakes and rivers throughout Europe. Wels catfish can grow to at least 9 feet (2.7 meters) in length and weigh nearly 300 pounds (130 kilograms). Its yellow color is believed to be a form of leucism and has previously been observed in other catfish.

Normally, such bright coloring would be a death sentence for a fish, because it would stand out to predators. However, this individual has managed to live to a surprisingly old age due to its size.