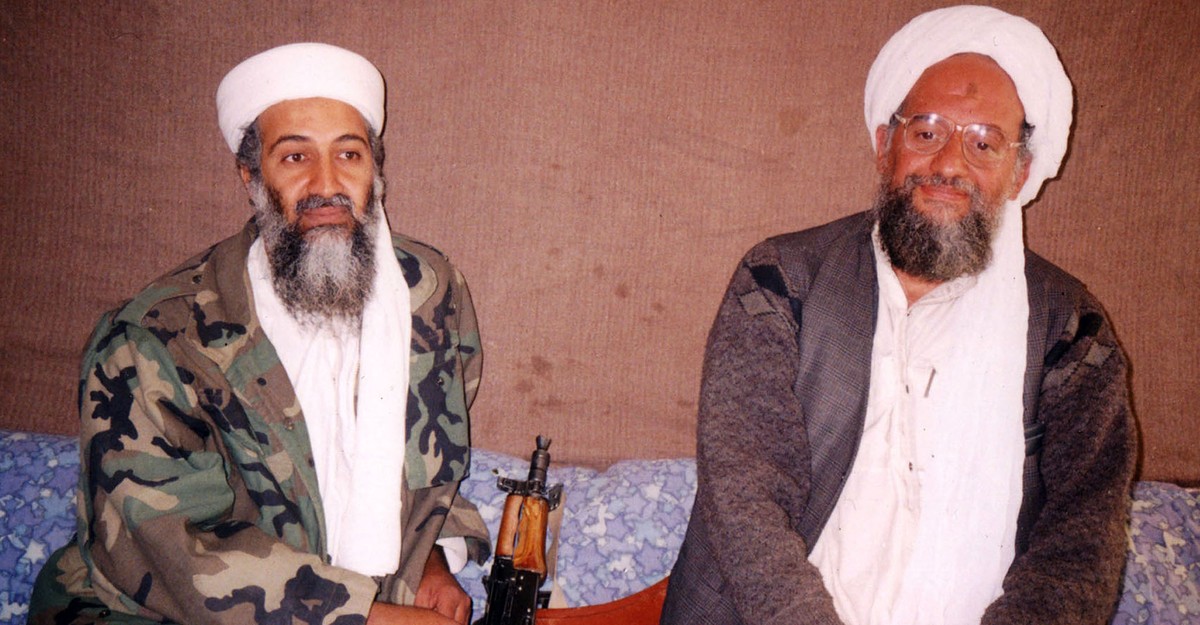 The United States killed the leader of al-Qaeda, Ayman al-Zawahiri, in a drone strike this weekend in Kabul. I already kind of miss him. Zawahiri came from an older generation of jihadists—he was 71—and was in many ways the kind of terrorist one wants. For a decade or more he had no known good ideas. He told young upstarts to shelve their own good ideas, and never got around to them. He was a black hole of charisma. Whenever the Islamic State, which eventually defied him and broke off from Zawahiri’s Al Qaida, announced a new video, I got a queasy feeling and hoped I would not see anything that would haunt my dreams. When Zawahiri announced a new video, my Pavlovian reaction was narcoleptic. He was human melatonin. If the Islamic State’s spokesman Abu Muhammad al-Adnani was a long huff of meth, Zawahiri was a cup of ovaltine.

He was also a creep and murderer. Thousands of people are dead because of him. If anyone deserved to be julienned by a Cuisinart blade dropped from the heavens by the CIA, it was Zawahiri. An Egyptian, he came of age politically around the assassination of President Anwar Sadat in 1981. Egypt imprisoned every Islamist it could find, and Zawahiri spent years in state prisons, where he was tortured. Years later, in Tahrir Square during the revolution of 2011, I met men who said they had known him in prison. They said they hoped their old friend was well but had not kept up the relationship; a few years in Egypt’s state security prisons was plenty. They had given up violence. One became a math teacher and raised a family. Zawahiri, who trained as a surgeon and came from a prosperous family, could have left the path of death, but he was incorrigible. Out of prison, he spent part of the 1990s encouraging jihad in the Caucasus, and part of it spreading death at home. In 1997, his followers hacked and shot to death 58 tourists and four Egyptians in Luxor. Eventually Egyptians lost patience with him, and he followed Osama Bin Laden to Pakistan and Afghanistan—where it appears he remained until the CIA found him.

By all indications, Zawahiri got cocky. When the Taliban ruled Kabul in the late 1990s, Bin Laden and Zawahiri could live fairly openly. Zawahiri might have suspected that those old days had returned, and that the Taliban’s agreement with the United States, signed in Doha, Qatar, last year, would secure Afghanistan’s sovereignty and allow an honored hero like him to live openly again. The Taliban are already grousing on Twitter about violations of the Doha agreement. But the Taliban promised at Doha not to host terrorists, so they have little standing to complain about the killing of the world’s most famous terrorist in their capital.

Zawahiri’s replacement will be younger and more energetic than the old doctor. I wish that younger man a short and skittish life. But the truth is that Zawahiri’s killing probably will not have much effect on global terrorism, because the younger jihadist generation has already ceased to regard him as a leader, spiritual or otherwise. Zawahiri’s crowning achievement, the September 11 attacks, turned out to be a one-off, and its plotters spent most of the rest of their lives on the run, or bored senseless in Guantanamo Bay. The jihadist movement that achieved something new was the Islamic State—which ridiculed Zawahiri, called him a goofball and a geezer, and set out on a path of wanton destruction against his orders. It mocked him for his deference to the Taliban and for swearing allegiance to its founder, Mullah Omar, who turned out to have been dead for years. Many of the possible successors to Zawahiri have already split off into other jihadist groups, and have long been trying to bring about carnage and a terrestrial paradise without Al Qaida’s consent. They certainly will not seek the consent of his successor.

More interesting, I suspect, will be the attitude of the Taliban. They thought they had a country of their own, and that they would be left alone to rebuild it. They want money, and they want food for their starving people. But their critics have said they are little more than terrorists themselves, and that anyone who claims they have softened in the last 20 years has been taken in. The presence of Zawahiri in Kabul will be used as evidence that the Taliban deserve to be treated like terrorists in perpetuity. They could not resist turning their capital into an Al Qaida clubhouse for even a few months. Unless it turns out that the Taliban ratted out Zawahiri themselves—I doubt it—the presence of Zawahiri will instead make the group look incapable of change, and deserving of all the skepticism it got. And that will mean a long hungry winter ahead for Afghanistan.