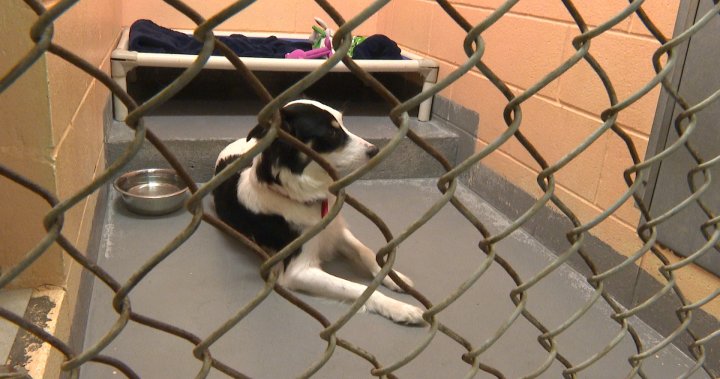 As the cost of living continues to increase across the country, more and more Canadians are surrendering their pets — and shelters are beginning to reach capacity.

“The economic stress that’s coming, and is getting worse, is putting people at risk of not knowing what to do, where to turn and how to get help, and so they’re having to make these terrible decisions that break their heart,” Barbara Cartwright, president and CEO of Humane Canada, told the Roy Green Show.

Alberta animal rescue puts hold on all its programs: ‘We are just trying to survive’

Humane Canada, which represents Humane Societies and SPCAs in every province and two territories, has been seeing an increasing number of calls and emails from Canadians looking for help surrendering their animal, according to Cartwright.

These calls come as the Bank of Canada last month raised its key interest rate for a sixth consecutive time this year in response to inflation reaching the highest level seen in nearly four decades.

With more and more people surrendering their pets, shelters are also reaching capacity, she noted.

“We’re seeing our shelters are now at, or close to, capacity. We see waitlists are growing for those shelters that don’t have space left,” she said. “Resources are getting stretched, both on the average Canadians side, but also on the shelter side.”

1:47
Alberta animal rescues hit hard by inflation: ‘We are just trying to survive’


Due to the large number of people who adopted animals from puppy mills during the COVID-19 pandemic, an increasing number of surrendered animals are also coming into shelters with behavioral issues, according to Cartwright.

This makes it harder to get the animal ready for adoption, she said.

However, what’s happening now is the opposite to what happened during the brunt of the COVID-19 pandemic.

“Shelters were empty because Canadians stepped up and when COVID first hit, shelters reached out to their local communities and asked people to foster the animals that were currently in care because we didn’t know what was going to happen with COVID,” said Cartwright.

What’s involved in giving up a pet?

Reaching out to a local Humane Society or SPCA is a great first step.

“Let them know what your challenges are. It might be as simple as getting some resources together,” said Cartwright, noting a pet food banking network Humane Canada is currently working to build in order to help Canadians feed their pets.

“The first thing that everybody should be thinking about is not reaching out to the shelter and thinking you have to surrender,” she said.

However, when surrendering an animal, there are a couple of things to be prepared for including potential waitlists, Cartwright noted.

Community comes together to rescue stranded dolphins in Digby, N.S.

After a pet is surrendered, the local Humane Society or SPCA then does its best to find a new home for the animal, according to Cartwright.

“We understand that it’s a heartbreaking thing to have to do,” she said.

And for those looking for ways to help, Cartwright encouraged anyone considering adopting to consider a cat, as many may be inclined to look first at getting a dog.

“We always have too many cats in our shelter,” she said, adding that fostering a pet can also be a great way to help out if you have the time and resources to do so.

“It’s a really great opportunity when you’re fostering because you can provide the loving care, you can have the companionship, but the animal is also going to a forever home,” she said.

–With files from the Canadian Press