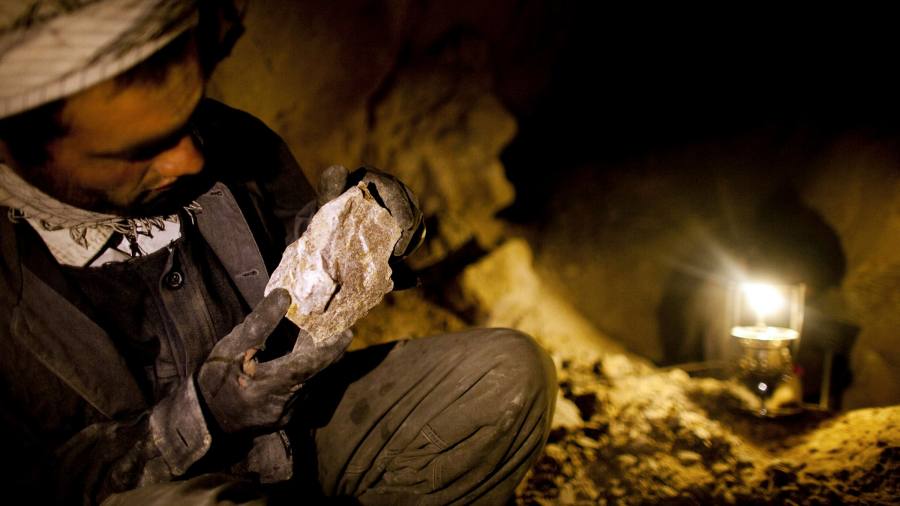 Sign up to myFT Daily Digest to be the first to know about Mining news.

The graveyard of empires is a rich cradle of resources. Positioned on the Tethyan belt, Afghanistan is well endowed with gold, copper, gems and lithium, prompting suggestions regime change will improve access. Some experts have seen the war-torn country as literally sitting on a gold mine, with total mineral deposits of $1tn — a 2010 figure dismissed by geologists and other less buccaneering types as hopelessly optimistic.

In truth, any number is a shot in the dark. Much of the data hark back to the 1980s, based on exploration carried out under the Russians. Still, rich seams of industrial and other metals exist. Various rounds of licence tenders attracted plucky miners from Asia and the west, including sometime JPMorgan investment banker Ian Hannam. Many such projects fell apart or simply withered away amid political strife, corruption and warfare.

It is wildly optimistic to imagine resources will be any easier to exploit under a new iteration of the Taliban than under previous regimes. Even if economics could, quite exceptionally, beat politics here, logistics are fraught. Afghanistan is a landlocked region with a threadbare railway network. Extraction of some minerals, such as lithium and rare earth metals, requires sophisticated technology. Pentagon talk of “the Saudi (Arabia) of lithium” was wide of the mark.

Problems dog even some of the most worthwhile projects. State-owned China Metallurgical Group and Jiangxi Copper Company secured the licence for Mes Aynak, one of the world’s biggest copper deposits, in 2018. Their latest issue is that the ore lies beneath a Unesco heritage site — which the miners can hardly bulldoze.

Much of what Afghanistan has is what the world, pivoting towards a greener economy, urgently needs. Some estimates reckon a quarter of the Taliban’s funding comes from mining. That is almost certainly hyperbole. But as a sector that spins off taxes, royalties and presumably bribes, it has some potential.

Estimates of the value of resources are deceptive, however. They leave out hefty production and shipping overheads. The cost of capital must also allow for political volatility. In Afghanistan, this has historically been off the scale. All the gold in the world is worth nothing if stuck under a land run by feuding warlords.

Our popular newsletter for premium subscribers is published twice weekly. On Wednesday we analyse a hot topic from a world financial centre. On Friday we dissect the week’s big themes. Please sign up here.