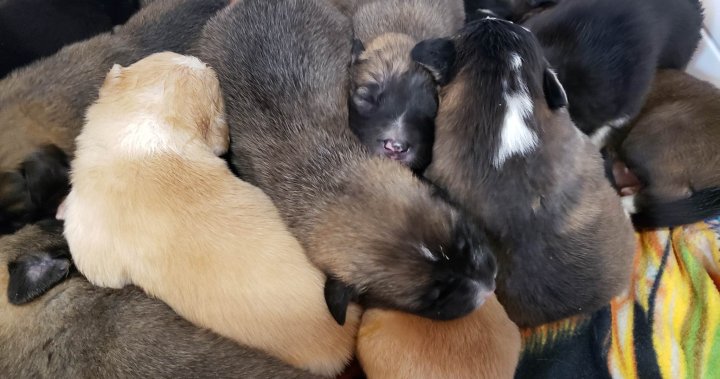 Co-founder Kath Oltsher said donations have declined and it’s forced the Edmonton-based rescue to make the decision to put a hold on all its programs.

“For right now, we are just trying to survive the now,” Oltsher said.

Zoes has halted intakes, its spay and neuter program, and its helping hand program that provides affordable veterinary care to low-income families.

Oltsher said this is also the first time in 11 years adoptions fees have been lowered for dogs and are free for cats, in an effort to get more pets into forever homes.

While it’s a stressful time, Oltsher believes it won’t be like this forever.

“We can keep going, that’s the beauty of what we do. I’m not paying for overhead, we’re using volunteers, volunteer’s homes — it just means we do less and less.”

Many rescues have been struggling lately: first the pandemic hit, and now there’s the high cost of living.

AARCS North Haven shelter’s Leigh McLean said the situation for their rescue is not as dire, but more and more animals keep coming in.

“Over the year last couple of years, we haven’t been able necessarily to go in and provide spay and neuter projects, or take in as many animals because of the restrictions from COVID. Now we are starting to catch up a little bit because we have all these extra kittens and puppies,” McLean said of the animal increase.

McLean said some people have been surrendering their pets because they are being forced to pick between feeding their family or their pet: “It can be a really challenging choice.”

She is also expecting to see a spike in surrenders, now that it’s cold and utility bills will increase.

“It feels like we have a more consistent populations than we did in our shelter last year.”

McLean said if someone is looking to help, donations don’t have to be money: volunteering, fostering or giving items like old towels or animal goods goes a long way.

Other large Alberta organizations, like Saving Grace Animal Society in central Alberta, are also running out of space to house animals.

The shelter in Alix has also lowered its fees in an effort to get more pets adopted.