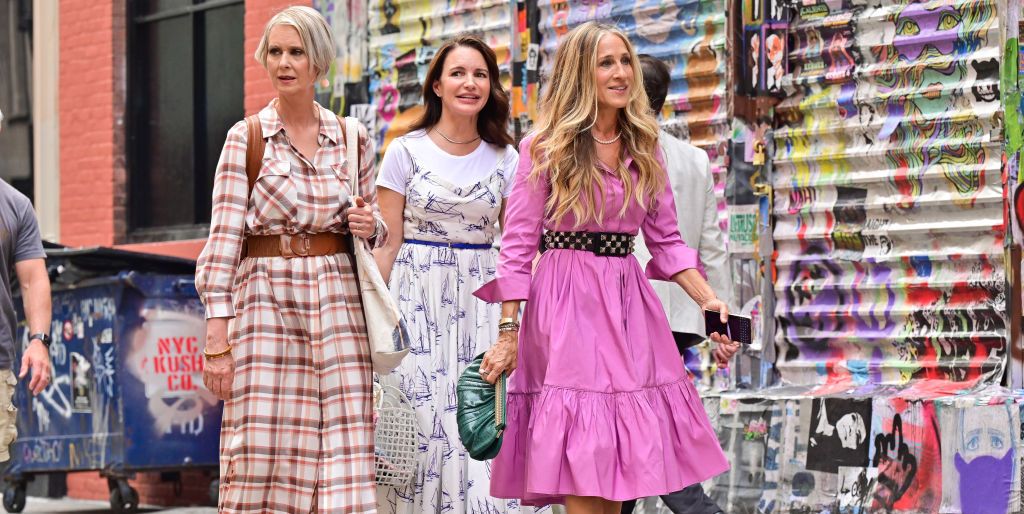 As everyone knows, half the fun of watching the original Sex and the City was that New York City was essentially the fifth girl sitting at every brunch and coming along on every night out. The city is a central character, and that has definitely remained the case with the Sex and the City continuation, And Just Like That…. The show follows Carrie, Miranda, and Charlotte as they navigate one of the most exciting (and challenging) places in the world.

But as you watch the show, you might be wondering where, exactly, these women go to their iconic dinners, or where their apartments *really* are. We’ve got the answer for you. We tracked down some of the filming locations for And Just Like That…, and the best news is that some of them are available for visiting. Time to plan a trip to New York!

Yep, you definitely recognize that door. It’s the iconic brownstone where Carrie lives, and you can see the IRL version on Perry Street in the West Village in New York City. (Even though in the show, her apartment is on the Upper East Side.) This is a private residence btw, so don’t be weird about it if you decide to check it out.

When Carrie is on her uncharacteristic walking spree through Manhattan, she goes to say hi to Miranda at Columbia. It looks like they’re sitting on campus, but they’re actually at Grant’s Tomb, which is a monument in Harlem.

Here’s another view of what the set looked like that day.

On her walking tour of Manhattan where she discovers that yes, the Upper West Side exists, Carrie also takes a quick trip through Central Park, where she finds herself walking on top of the Bethesda Terrace.

Here’s what it looks like underneath. You might also recognize this iconic spot from Gossip Girl because it‘s where Chuck and Blair got married. Fun!

The very first shot of the season sees the girls at brunch, naturally. Weirdly, the location for that brunch is the restaurant inside the Whitney Museum, which you’d most likely only go to if you were at the Whitney already.

The Last Lunch With Stanford – The East Pole

Hopefully if you go to The East Pole in real life they won’t continually bump your chair with the kitchen door. The restaurant is located on East 65th in Manhattan.

Miranda Carrie take a little walk after that lunch, and you can see this plaza is located right across from Radio City Music Hall.

No, it’s not “The Manhattan School of Music, Carrie!” It’s technically the Lyceum Theater, which is located in Times Square.

Here’s a view from a bit further out.

When Carrie and co. go on a mission to track down Natasha, they find her office opposite this wall of graffiti on Crosby Street, between Spring and Prince.

The Starbucks – The Corner of Crosby and Spring

And then when that meeting goes horribly wrong (because it doesn’t go at all), they meet up at this Starbucks in SoHo, on the corner of Crosby and Spring streets.

Who among us hasn’t attended a show at Webster Hall and decided afterward that the last thing you wanted to do was keep the evening going? We feel you, Carrie.

I mean, if you’re really in the mood to track down Miranda’s Columbia University subway station, you can. It’s on 116th street in Harlem.

It makes sense that Carrie would want to hold Big’s funeral somewhere as stylish as an art gallery. In real life, it’s the Greene Naftali Gallery in Chelsea.

Emma Baty
Emma Baty is the Associate Entertainment Editor at Cosmopolitan who focuses on movies and TV.