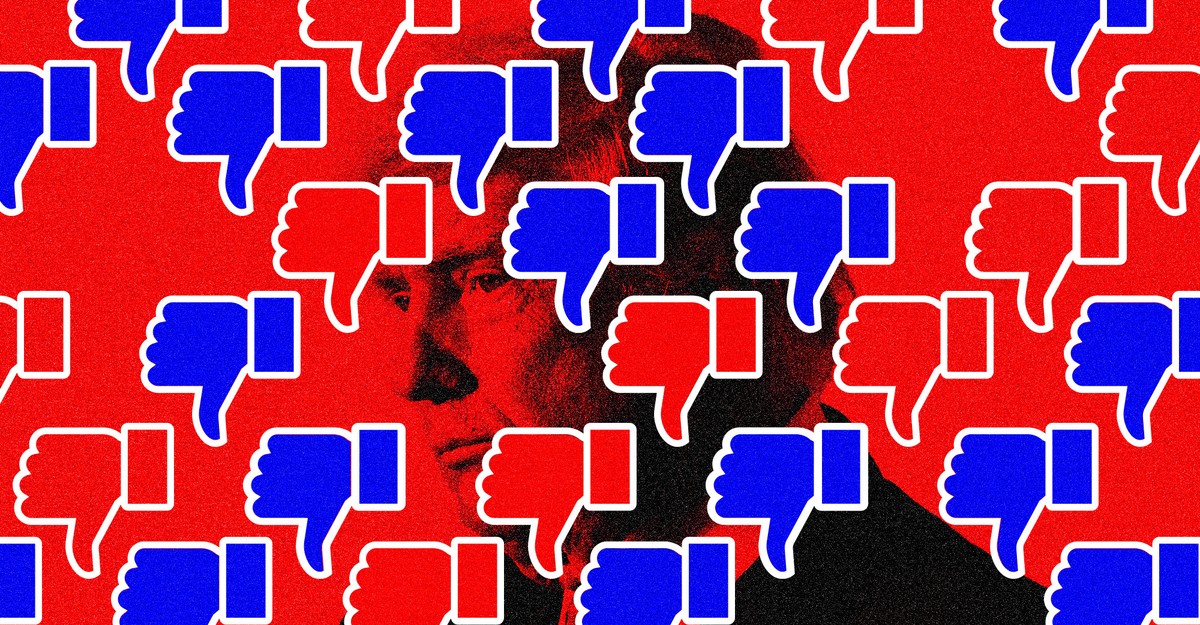 Last week, President Joe Biden delivered a speech in Washington that sought to frame the midterm election as a battle over the fate of democracy—and, implicitly, as a referendum on Donald Trump and Trumpism as a movement.

The speech didn’t attract much attention, and where it did, critics tended to pan it as needlessly divisive, flailing by a sinking party, or, worst of all, superfluous: Biden seemed to be preaching to the choir and talking over the heads of a congregation more concerned about inflation, crime, abortion, and other urgent concerns.

Not for the first time, Biden has both the last laugh and a better intuition about voters than his critics assume. The midterm-election results, which appear to have delivered Republicans only modest gains, show that although a sizable minority of Americans will never defect from Trump, an even larger group seems equally determined to stop Trumpism. The existence of this anti-MAGA coalition is essential to understanding not only this election, but also the 2024 race.

“When elections are clearly about Trump and MAGA, MAGA will lose,” Michael Podhorzer, a progressive strategist, told me. “What Trump did was make a really large number of Americans say, ‘There’s now something really at stake in elections, and it matters more if I go out and vote.’”

Across the country, Trump-endorsed candidates underperformed. In Pennsylvania, Mehmet Oz—who owed the GOP nomination to Trump’s help—lost a Senate race to the Democrat John Fetterman, and Doug Mastriano lost the gubernatorial race to Josh Shapiro. The Republican Tudor Dixon lost a bid to unseat Michigan Governor Gretchen Whitmer. In Arizona, the GOP nominee Kari Lake is trailing the Democrat Katie Hobbs (although many votes remain uncounted).

Although some election-denying candidates won—far too many—some of those who stood to matter most struggled. Kristina Karamo lost a race for Michigan secretary of state, and Mark Finchem, who was present at the January 6 Trump rally, trails in Arizona. Also in Arizona, the Republican nominee Blake Masters, who seems skeptical about democracy in general, is behind Senator Mark Kelly.

In a traditional midterm election, the president’s party suffers. The opposition party’s voters are angry; those who back the party in the White House are complacent or disheartened and stay home; swing voters are mercurial. Given high inflation, economic jitters, and Biden’s low approval ratings, this looked like it could be a traditional midterm, with huge Republican gains—an impression that GOP leaders encouraged with lofty predictions and late sorties into blue districts. Pundits also doubted that Democrats could capitalize on anti-Trump sentiment when he was not on the ballot, pointing to Terry McAuliffe’s defeat in a 2021 Virginia gubernatorial campaign that he tried to center on Trump.

But the regular pattern broke. Outside of Florida, where Democrats suffered an epochal collapse, Democratic voters didn’t stay home. Independent voters actually backed Democrats narrowly, according to exit polling. The group that the Cook Political Report’s Amy Walter calls “meh voters”—the ones who somewhat disapprove of Biden and worry about the economy—favored Democrats too. (By contrast, in 2018, when Trump was president, those who somewhat disapproved of the incumbent favored his opposition.)

One major factor behind this is abortion. Putting pro-life justices on the court was one of Trump’s central campaign promises and keystone achievements. The Supreme Court’s Dobbs v. Jackson Women’s Health Organization decision overturning Roe v. Wade was a major factor for voters, who supported pro-abortion-rights ballot measures in five states.

Pro-abortion-rights backlash was widely expected, but the signs of pro-democracy voting were largely overlooked. Americans consistently tell pollsters that they worry about Trump’s attacks on elections and institutions. A Reuters/Ipsos poll in September, for example, found that 58 percent believe the MAGA movement is a threat to the foundations of democracy. But many observers questioned whether that would be a driving force in votes or simply too abstract to overcome economic worries.

With the votes counted, that seems wrong. Not only did election-denying candidates fare poorly, but voters told the Associated Press that the future of democracy was a top issue for them, trailing only inflation in importance. (Democrats actually won voters who said the economy was not doing well, according to AP).

Podhorzer argues that analysts have failed to recognize the emergence of a big anti-MAGA coalition that started in the 2018 midterm. During the Barack Obama years, Democrats voted heavily in presidential elections, but many stayed home during the 2010 and 2014 midterms, producing a GOP-heavy electorate. But in 2018, the state of play changed. Turnout shot up an astounding 14 percent. That gave Democrats a large tranche of potential voters who had already cast ballots in a midterm rather than just a presidential election, and who could help blunt Republican momentum if they showed up in 2022—which they apparently did.

David A. Graham: How to save democracy

“There’s this new group of voters there because of Trump and MAGA,” Podhorzer said. “That’s changed the equation.”

Those voters still had to turn out, though. Democratic messaging around abortion helped, but so did hearings of the House committee investigating January 6 and Trump’s attempt to overturn the 2020 election. Republicans rolled their eyes at the hearings, arguing that they wouldn’t change anyone’s mind and were drawing underwhelming ratings. More sympathetic observers supported the hearings as a matter of justice and the political record, but they doubted they would have much political impact.

But the peak of those hearings this summer coincided with both the Dobbs decision and Democrats’ best polling of the midterm cycle. Biden’s approval rose, and Democrats took an edge in the generic congressional ballot. Those measures receded some in recent weeks, but the bump helped push Democrats through to the election.

The consistency of the anti-MAGA coalition, which has been a decisive factor in the 2018, 2020, and 2022 elections, should shape the 2024 election. Its existence helps prevent large swings in results, feeding into the calcification of American politics.

This year’s results also suggest that Trumpism can motivate Democrats or Democratic-leaning voters. On the other hand, only Trump himself motivates his MAGA base—even though he has twice lost the popular vote. That poses a question to the Republican Party ahead of the next presidential primary: Should the party return to Trump, who motivates the base but is a proven loser? Or should they opt for a candidate who can appropriate Trumpism without Trump’s baggage, but who might inspire lower enthusiasm in the base?

These results are not sufficient reason to be sanguine about the state of American democracy. Kevin McCarthy, the likely next speaker of the House, has shown that he is a Trump sycophant. Election deniers won up and down the ballot across the country, and they could wreak havoc. But the midterm shows that many Americans are not just aware of the threat to democracy, but ready to vote based on it.