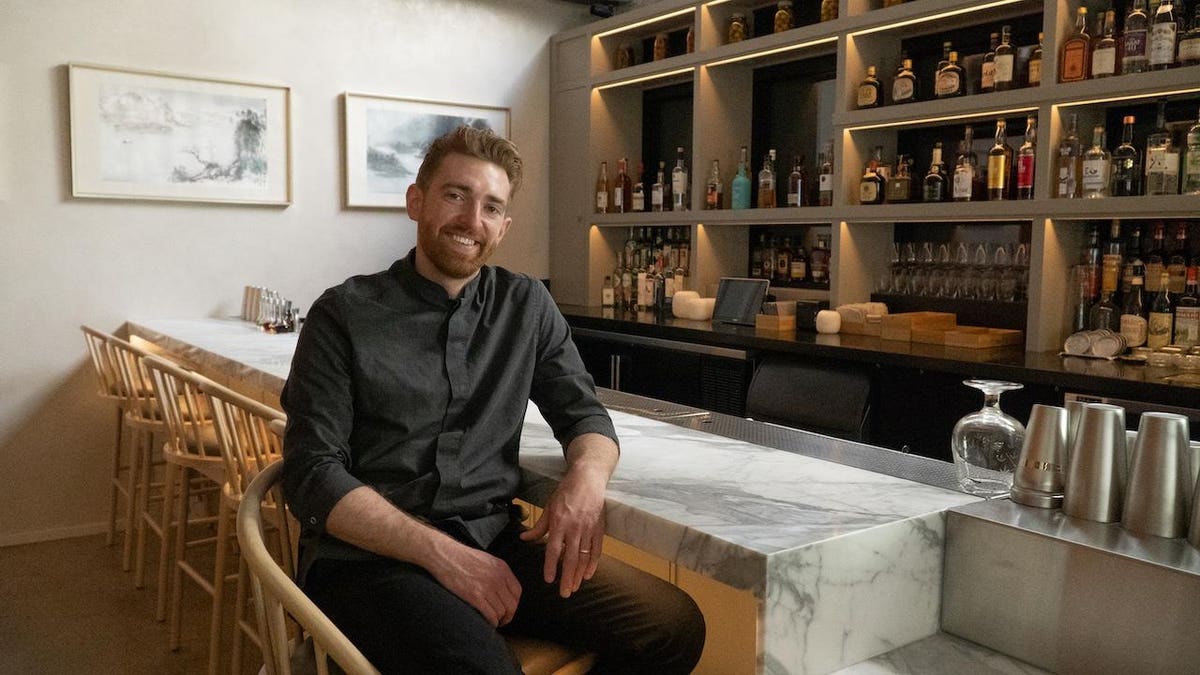 The headiest drinks menu in Los Angeles right now is one that won’t even give you a buzz. At the downtown restaurant Kato, bar director Austin Hennelly designed an alcohol-free pairing as ambitious and provocative as Chef Jon Yao’s acclaimed Taiwanese tasting menu.

From a garden tonic cocktail made of Korean cucumber and bitter melon with peony tea to the finishing glass of 2021 Navarro Vineyards Gewurztraminer from the Anderson Valley in Mendocino—and yes, that’s a non-boozy Gewurtz—the list is surprising, expressive, nuanced, sophisticated and, best of all, tastes nothing like grape juice.

Hennelly previously worked at Momofuku’s Majordomo in L.A., as well as New York City’s Maison Premier and Amor y Amargo, among others. I spoke to him recently to learn more about a pairing that’s completely intoxicating yet still lets you drive home.

What’s the backstory on this amazing wine-free wine list?

Austin Hennelly: I stopped drinking alcohol at the beginning of the pandemic, and I wanted to construct a pairing that would do what a pairing with alcohol does. I wanted the drinks experience to enhance or echo what’s on the plate; or, in some cases, contrast what’s on the plate in an almost discordant way to bring out the flavors. Those rules still apply when you’re designing alcohol-free options.

Fascinating. But I’m still stuck on a drinks director who doesn’t drink.

Austin Hennelly: Yes, it’s not completely unheard of for a bartender, but it’s definitely not the norm. The truth is, something like 30 to 40% of the guests at the original Kato location in West L.A. were people that don’t drink alcohol. When we moved downtown, we just all kind of took it as a given that we would have a non-alcohol preparing in addition to the alcohol pairing.

How difficult is it to find alcohol-free drinks that can live up to the level of the great wines on your wine pairing menu?

Austin Hennelly: It turned out to be more challenging and time-consuming than I anticipated but some big rewards came out of that work. For example, the Navarro Vineyards Gewurztraminer juice is very hard to get. The vineyard has an extremely limited supply and they’re reticent about releasing too much of the product to any one place. The winery requires you to purchase a case of their wine in order to purchase a case of the juice. We did that for the first round but we quickly started to run out of space so I went back to them, hat in hand, and basically pleaded to get more cases because it really is just the most perfect pairing for the dessert Jon is making right now.

Who knew juice could be so rare?

Austin Hennelly: It’s amazing what has happened with this part of the market. In Germany, Johannes Leitz, one of the best Riesling producers, makes a beautiful sparkling Riesling juice that we pair with the caviar course. For our beef pairing, we’re pouring the Studio Null Prickly Red. That’s a blend made from organically-grown Tempranillo and Syrah grapes from Tierra de Toledo, Spain, and it’s completely alcohol-free. And there’s the sparkling rosé from Wölffer Estate, also in Germany, that they call Spring in a Bottle, and it’s almost impossible to keep that in stock. It’s so delicious.

In 30 seconds or less, can you explain the science of wine-free wine?

Austin Hennelly: They take wine and put it in vacuum conditions, so that the liquid boils at a much lower temperature, almost close to room temperature. The alcohol evaporates, but the temperature isn’t high enough to destroy any of the esters or aromatic compounds that give the wine its character. The wine at the end of that process still has its fundamental character of whatever great varietal you’re working with, so there’s aromatics and structure, but without getting you drunk.

A pairing like this feels pioneering in a way. But it makes sense. Do you think we’ll see this everywhere soon at the fine dining level?

Austin Hennelly: I hope that other other beverage directors and other restaurants will put the thought and effort into this. It makes sense for guests that don’t drink alcohol, and also for the restaurant’s sake, because it is a revenue driver. Most restaurants don’t really have a plan for alcohol-free drinks. They just kind of wing it. Selfishly, I hope this takes off. I go to restaurants as someone who doesn’t drink alcohol, and I always wish there were just more options to drink.

Hey, I’ll drink to that!

This story has been edited and condensed for clarity.