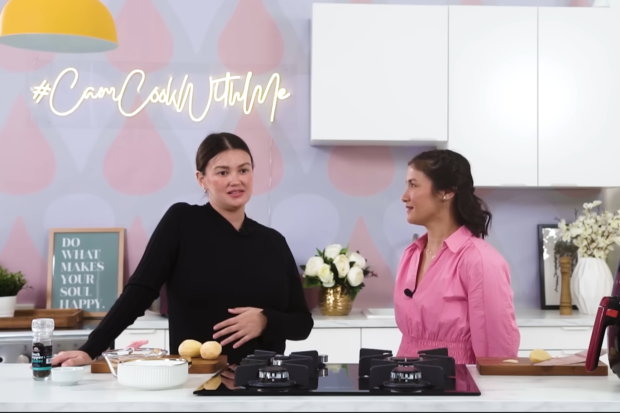 Angelica Panganiban and Camille Prats looked back at their “traumatic” experience as teenage stars in “G-mik,” when they were called out for gaining weight while taping the TV series.

The actresses recounted their struggles during their “G-mik” days while in a conversation for Prats’ YouTube vlog last Thursday, Aug. 11. They opted not to elaborate on who was calling out their weight gain.

(Our bodies were always monitored… I feel like that was one of the things in our past that when you look back, [you realize] that the industry really has unique requirements.)

Prats recalled telling another person about the weight requirements in the past, which led her to “break down.”

“Hindi ko na-realize na all this time pala, struggle ko pala siya,” she told Panganiban. (I did not realize that all this time, it was a struggle for me.)

For her part, Panganiban recounted receiving a letter saying she had to “take a break” from tapings after she gained weight.

“Parang, ‘Pahinga muna siya ngayon’… para daw matauhan ako sa katawan ko,” she narrated. (It was like, “She should take a break for now”… so that I would be more conscious of my body.)

At the time, Panganiban and Prats could not understand why they could not eat as much as they wanted to and noted that they considered food as one of the rewards they got to enjoy after working on-camera.

(At that age, you could not understand. It felt so nice to eat then. That was the age when we’re also working so it [eating] was one of the perks of the job.)

Panganiban admitted she felt “trauma” because of the comments about her body and being compared with fellow female actresses at the time.

(Growing up, you know, it caused trauma. Until now, when I have checkups since I am pregnant and they tell me, “You’re gaining weight, that is not okay,” I feel hurt. I feel attacked, like I did something wrong, when people tell me I am big now.)

Panganiban and Prats then expressed appreciation for the change in the public’s point of view when it comes to weight, with Panganiban stressing that people should instead be conscious of their health.

“May mali ba pag mataba ang isang tao? Ikaw ba ay healthy? Paano mo nasabi na ikaw ay healthy?” she asked. (Is there something wrong with being stout? Are you healthy? How can you say you are healthy?)

“G-mik” was a youth-oriented TV series which ran from 1999 to 2002. Aside from Panganiban and Camille, its original cast also included Carlo Aquino, John Prats, Stefano Mori and Miko Samson.  /ra

Camille Prats assures she’s at her ‘healthiest’ amid weight loss