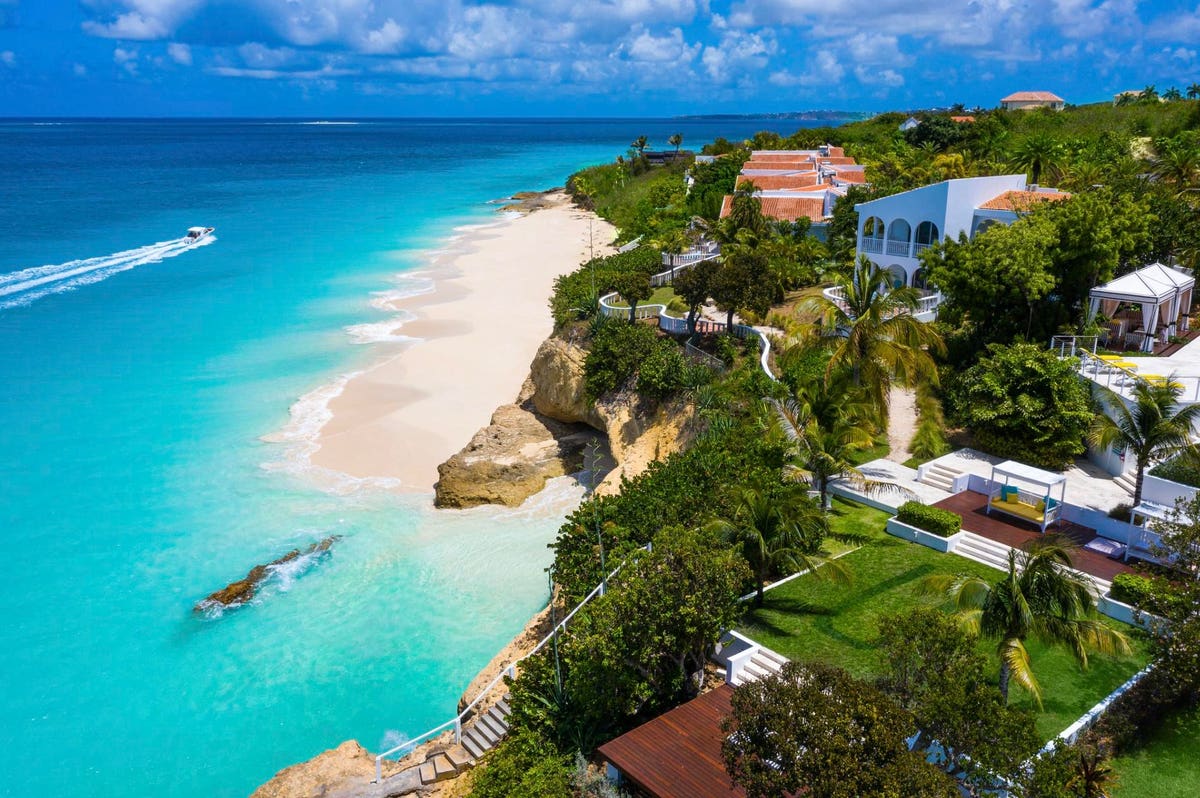 Sometimes I look at pictures of the Caribbean and scoff to myself: NO. How can the water be that blue? The sand that white? And that little crab so perfectly red and happy? Surely there’s a filter on these images. I recently returned from the Caribbean, particularly from Malliouhana, the Auberge luxury resort on the island of Anguilla, and I’m here to attest that, in fact, the water, sand, and little crabs require no filter. Malliouhana itself, with its bright celadon blue and mango splashes of color, is also as vibrant and serene as its natural surroundings and a wonderful choice for a Caribbean sojourn.

Part of Malliouhana’s allure is how it feels like a grand estate of a visionary who wants you to stay awhile and lavish in the beauty of the place. Indeed, when Leon Roydon, the son of immigrants from Eastern Europe, visited Anguilla on a day trip from St. Martin in 1980, he couldn’t resist the charm of the flat, dazzling island. Local legend has it that Roydon declared to his wife that very day that he would retire in Anguilla and build a hotel, the first of its size and luxury for the island. A few years later, Malliouhana opened. Roydon stayed closely involved with the operations up until his death in 2014.

I love a resort with a rich history, and though Malliouhana is now part of the Auberge Resorts Collection as of 2014, Roydon’s welcoming personality and bold taste still shines within the hotel. At the entry way, a striking collection of old diving bells a la Twenty Thousand Leagues Under the Sea is displayed in the lobby. (Diving was one of Roydon’s favorite hobbies.) A few steps further, mirrored mosaic tiles sparkle across the entire “living room” portion of the resort with paintings of tiny flamingos in forests. And within each of the 63 rooms and suites, Roydon’s private art collection, spanning more than one thousand works created by artists within the Caribbean, is further generously shared. My suite, a sweeping room with a wrap around 800 square foot patio, had a dramatic panel painting of exotic animals by Haitian artist, Jasmin Joseph.

I was so charmed by the piece that I asked the front desk if artwork was ever purchased by guests. Many guests ask, apparently, but the art is never sold. This is what makes a resort with a history and a visionary’s personality so appealing: it’s just irresistibly special.

The Auberge Resorts Collection continues to ensure Malliouhana is a special destination. The resort reopened in December of 2020 following a multi-million dollar “reimagination,” which included the completion of a 1,897 square-foot two-bedroom beachfront suite right on the property’s white sand real estate, Turtle Cove, as well as the build out of a grand open-air restaurant, Celeste. At the helm of Celeste is Shane Lewis, Director of Culinary Experiences at Malliouhana, who spent a handful of years at another resort group I love, the AMAN resorts. One aspect of the Aman resorts is its inclusion of local fare within all of its properties, and Lewis’ menus at Celeste blend local Caribbean favorites with elevated execution. Seared scallops, rum scented Caribbean lobster bisque, and zesty conch curry are a few of Lewis’ excellent dishes.

Lewis will also oversee the Flavors of Malliouhana event series in March of 2022. Malliouhana was known for putting Caribbean cuisine on the international map upon its opening, and this event will feature both culinary residences and chef collaborations from the 11th to 26th of March. JJ Johnson, a James Beard Award-Winning Chef known for his Afro-Asian cuisine, is one chef so far announced. For those cuisine and Caribbean inclined, this would surely be the event to attend. I know Roydon would approve, and I’m looking forward making Anguilla an annual destination.