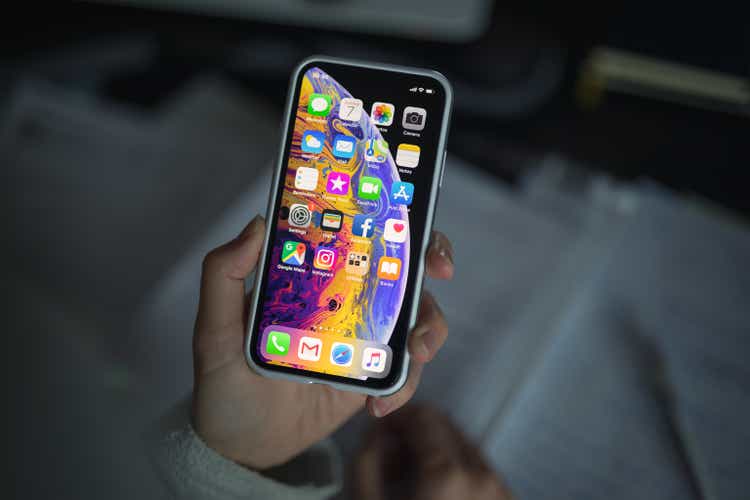 The time has come for Apple (AAPL) to report fiscal Q1 earnings. This could be a big moment for the stock, as it quickly entered correction territory in the first few weeks of 2022 and has yet to find any support — see chart below.

Following the recent pullback, I turn modestly bullish on AAPL once again, after finding shares a bit too expensive in December, at nearly $180. Fundamentally, Apple seems to be as strong as ever, except the stock is noticeably cheaper now.

What will likely happen

Consensus suggests that Apple’s revenues will increase 6% YOY to $118.5 billion. While the growth rate is modest compared to what investors became accustomed to seeing lately, Apple’s revenues (1) should be the highest ever and (2) will face tough comps, when top-line growth reached 21% in fiscal Q1 2021 — comps get more challenging through the next few quarters, see chart below.

Wall Street could be at risk of being way off on its estimates, however, as Apple once again refrained from providing specific revenue guidance for the holiday period. What we know from the last earnings call is that the revenue impact of supply chain issues should reach $6 billion, according to the management team. Also, iPad should be the only segment experiencing a decline in sales, in large part due to insurmountable comps of 41%.

It’s likely that the Mac will shine in fiscal Q1. Third-party data suggests that the PC industry remains healthy, both in terms of shipments and usage — something that Microsoft (MSFT) CEO Satya Nadella confirmed during his company’s recent earnings call. Apple is likely to benefit even more: (1) it probably took market share away from the likes of Lenovo (OTCPK:LNVGY) and HP (HPQ), and (2) the higher-end device upgrades using the M1 chip probably mean that ASP (average selling price) will be stronger as well.

Plenty has been said by a few research shops about the iPhone 13 cycle being robust in the holiday quarter, even though the component shortage may have been a headwind preventing the segment from performing even better. More recently, Counterpoint Research indicated that the iPhone reached record market share in China by growing smartphone revenues 32% YOY in the holiday quarter. Therefore, it looks like momentum will carry forward in the Far East driven by the iPhone, after Apple’s delay in entering the 5G space caused sales to tank in Greater China in fiscal 2019 and 2020 — see below.

Further down the P&L, there should be less room for surprises since Apple has guided for gross margin, opex, other expenses and tax rate. Should Apple deliver what analysts expect to see in revenues, below is what I estimate the P&L to look like (in millions, other than EPS), assuming the mid-point of the guidance ranges for each line and my projection for share count.

When I turned neutral on Apple stock last month for the first time ever, I made the case for front-loaded gains in calendar Q4 of last year. Shares rallied strongly against the Nasdaq in anticipation for longer-term growth opportunities in the metaverse and autonomous vehicles, in addition to bullish expectations for holiday period financial results. Since then, AAPL has dipped more than 10%, shedding around $300 billion in market value along the way.

There’s nothing about Apple that concerns me fundamentally, which is why I believe that the stock will continue to produce market-beating returns in the long term. With shares now valued at less than $160 vs. the January peak of over $180, owning shares of a robust, cash-producing company gains strength at a 2022 P/E of 26 times that has de-risked a bit lately (see below).

It’s hard to tell if Apple will soon find support from which it can climb again. Fiscal Q1 earnings could be a turnaround point in sentiment, should the company deliver the goods. But there is just too much uncertainty in this volatile market for any investor to try and catch a clean bottom.

For this reason, I prefer not to overcomplicate the investment decision process. Understanding that AAPL can still dig a deeper hole under its feet, I believe that the recent share price pullback is good enough for me to turn modestly bullish on this stock once again.