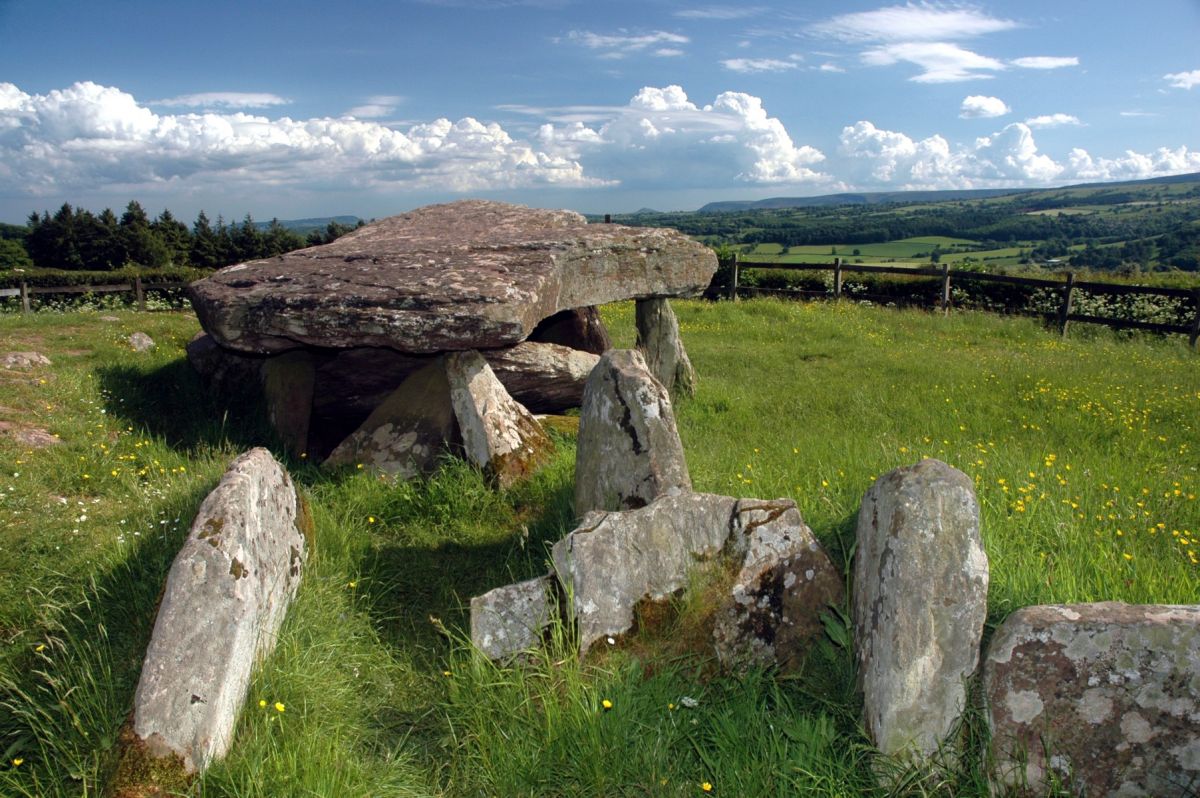 A mysterious stone tomb in western England — known as Arthur’s Stone because of its links to the mythical King Arthur — originated almost 6,000 years ago as part of an elaborate “ceremonial landscape” across the whole area, according to archaeologists.

Excavations this year near the ancient stone structure in rural Herefordshire, just east of the River Wye between England and Wales, show that the site was first occupied by an earthen mound pointing to another ancient structure nearby; but that a few hundred years later, it was rebuilt and realigned to point to hills much farther south, project leader Julian Thomas, a professor of archaeology at the University of Manchester in the U.K., told Live Science in an email.

“This is a ceremonial landscape like those around Stonehenge or Avebury, but rather earlier,” Thomas said. “It certainly implies that this is a location that was politically or spiritually important at the start of the Neolithic.”

Arthur’s Stone consists of nine upright, or “standing,” stones that support an immense “capstone” weighing more than 25 tons (23 metric tons). The passage underneath leads to what’s thought to be a burial chamber, although no human remains have been found there.

The structure gets its name from legends of King Arthur, who is said to have resisted the Saxon invasion of Britain about 1,500 years ago.

Several historical events have also taken place there, including a duel between knights during the Wars of the Roses in the 15th century. In 1645, during the English Civil War, King Charles dined with his army there. And according to the website Mysterious Britain, Arthur’s Stone was C.S. Lewis’ inspiration for the “stone table” where Aslan the Lion was sacrificed in his “Narnia” stories.

The excavations revealed that the first earthen mound at the the Arthur’s Stone site pointed to the so-called Halls of the Dead, which teams led by Thomas discovered on a ridge a little over 1,000 yards (910 meters) away in 2013.

The Halls of the Dead were originally large timber buildings that were deliberately burned down and replaced by three earthen burial mounds, possibly after a local leader had died. The remains of similar wooden buildings have been found at Neolithic cemeteries in Europe.

The original mound site was retained by a palisade of upright wooden posts and was very similar to the central mound at the Halls of the Dead site, Thomas said. But the posts soon rotted away and the mound collapsed, so a second monument was built at the site up to 200 years later.

The rebuilt monument, probably consisting of the stones that remain today within a second earthen mound, also had an “avenue” of wooden posts that pointed toward a prominent gap between two hills on the horizon about 12 miles (20 kilometers) away, he said.

“Significantly, the stone elements are on the later alignment, along with the post avenue, and that is one of the reasons why I think they form part of the later version of the monument,” Thomas said. “I think the initial emphasis is on the internal relationships between the monuments that make up the complex but that later, the focus shifts outwards.”

Arthur’s Stone is now one of the most distinctive and best-known Neolithic monuments in England. Several local legends link it to King Arthur.  However, it must have stood for several thousand years by his time, and most historians think Arthur probably didn’t exist.

According to one tale, marks on one of the stones were made by Arthur when he knelt there to pray; another story is that those marks are the indentations of the elbows of a giant he killed. The monument also supposedly marks where Arthur was buried.

For example, the later alignment may have indicated that that the gap in the hills it pointed to was an important route for travelers or “a source of some important resource, or a place where allied communities lived, or another place of spiritual significance,” Thomas said.

Other features of the landscape, including several other earthen mounds and a Neolithic “causeway” and enclosure, were “an indication that this was a place that people came to for gatherings, meetings, [and] feasting … and a place that retained its significance for centuries,” he said.