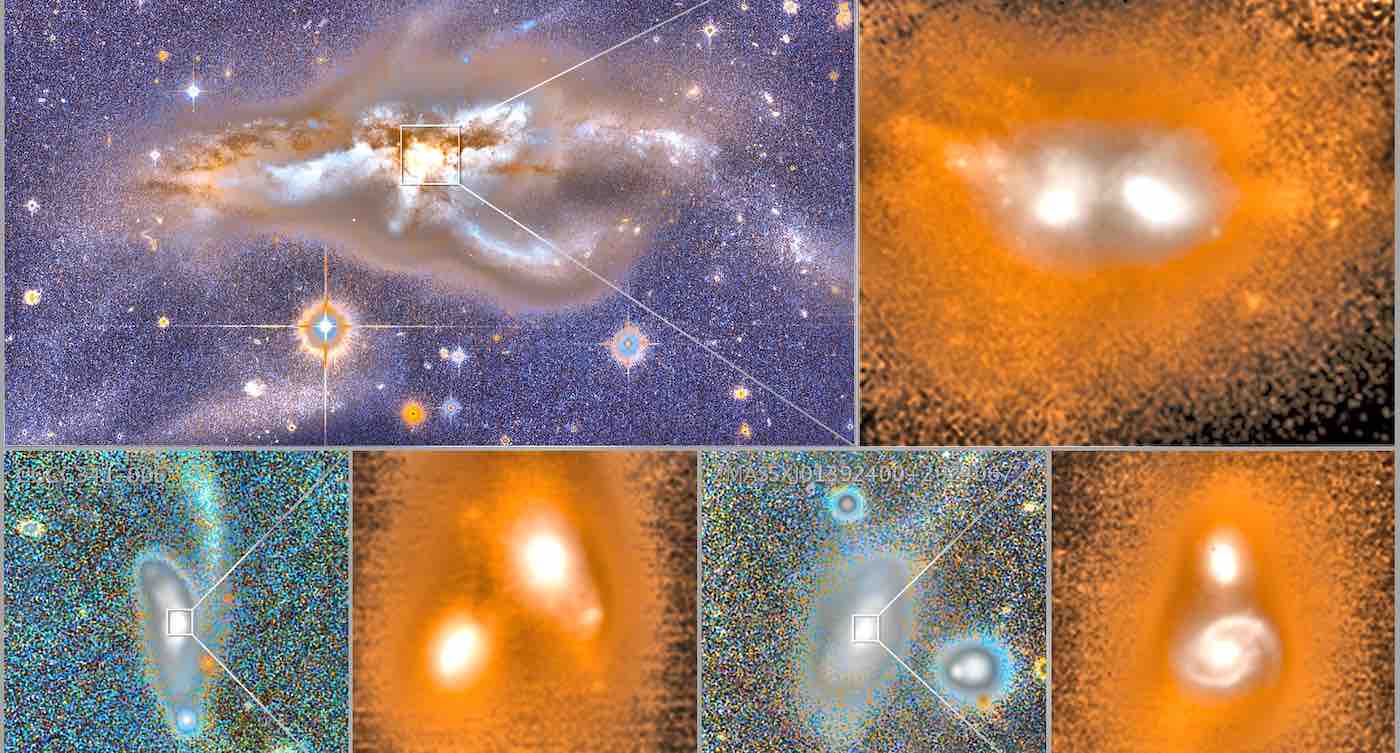 Reprinted with permission from World At Large, a news website of nature, politics, science, health, and travel.

A galaxy featuring a pair of supermassive black holes could be about to receive a pretty loud wake up call, as the titanic entities will spiral together and merge in just a few months, with an expression of energy that will literally shake the entire universe.

This big bang could be the first of its kind that scientists will be able to witness, and the sheer mention of a prediction that we know when and where such an event would take place lead scientists around the world scrambling for telescope time to try and catch a glimpse in X-rays, gamma rays, and radio waves.

Most galaxies probably have supermassive black holes at their center, but scientists don’t know how they grow so large. One theory is that they periodically suck in material that makes them grow big and grow bright, becoming active galactic nuclei or AGN. Another theory is that when two galaxies collide, the black holes at their center set themselves on a collision course which causes them to merge, bringing them into the supermassive size.

Mergers would bring the black holes too close together for their light to be separated. Instead, they are detected either through gravitational waves at observatories like LIGO, or optically through periodic oscillations in the signatures of energy and heat churned out into the surrounding matter by the pair as they grow nearer to each other.

Ning Jiang of the University of Science and Technology of China was operating a survey telescope from the Zwicky Transient Facility in California where he and his team stumbled upon data that appeared to be from an AGN with two such black holes, in which the oscillations during an observing period of 3 years, decreased from 1 year to 3 months, suggesting that within 100 days, the pair of black holes would tie the knot.

“If the interpretation is true, a coordinated, multi-band electromagnetic campaign should be planned for this first binary [supermassive black hole] merger event observed in human history,” the authors write in their paper which is yet to be peer-reviewed— and some critics are skeptical.

Just have to wait and see

Fortunately for everyone involved and impacted by this exceedingly-bold prediction, the usual periods of waiting ascribed to astronomical research is much shorter, as the black holes merging could be 100 to 300 days, or even less.

If a merger does take place, along with a massive burst of light along the electromagnetic spectrum, there will be a shower of neutrino particles, which can be detected at the IceCube neutrino observatory at the South Pole, and a massive ripple in the fabric of space and time called a gravitational wave.

Bold claims require bold evidence, and Science Magazine had further opinions from scientists that believe the evidence is merely circumstantial.

RELATED: NASA Probe Enters the Sun’s Atmosphere for the First Time, Immediately Teaching Us New Things About Our Star

Theorist Daniel D’Orazio from the Niels Bohr institute in Copenhagen point out that the galaxy, logged as SDSSJ1430+2303, lacked the diminishing oscillations in its light curve in the years before Jiang started observing it. Before then, there were steady emissions of energy into the surrounding matter, suggesting that it is merely a black hole binary galaxy and nothing more.

However, on the 14th of September, 2015, the LIGO-Virgo collaborations announced the first observation of gravitational waves from a signal of two black holes with masses of 29 and 36 solar masses merging about 1.3 billion light-years away. During the final fraction of a second of the merger, it released more than 50 times the power of all the stars in the observable universe combined.

CHECK OUT: This is What it Looks Like When a Black Hole Snacks on a Star

This merger would be an awful lot bigger. Rather than containing 36 times the mass of the sun, they would contain the mass of hundreds of millions of suns— and no one can say for certain what the observable effect would be in this case.

SHARE the Space Alert With Geeks on Social Media…