GABRIEL MARTINELLI revealed how he sobbed at being called up for Brazil’s World Cup squad.

The Arsenal forward added that club boss Mikel Arteta has told him to go and “smash it” in Qatar.

Martinelli, 21, has only three international caps and is off to his first major tournament and was left speechless by the big news that he was part of Tite’s Brazilian squad.

He said: “I’m very happy, it’s one of the most important moments in my life and in my family’s life as well – I’m buzzing. I’m so excited to go there and be part of this team.

“I think it will be good for my career and to play in the World Cup will be amazing. 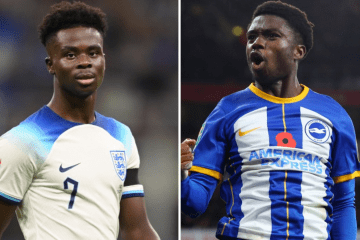 “I’m so excited to go there and I’m prepared for the challenge and and I hope we will win it.”

Martinelli has been a driving force in Arsenal’s dramatic resurgence this season and is earning rave reviews from boss Arteta.

Martinelli said: “I think my Arsenal form has been so important because if I’m not playing good at Arsenal I cannot be called up and that’s why I’m there because I’m doing well with the club.

“When I talked to Mikel, he was so happy for me, said congratulations, and said go there and smash it.”

Meanwhile, Martinelli’s inclusion was branded “a joke” and a “lack of respect for football” by ex-Brazil star Neto after Copa Libertadores winner Gabigol was one of those overlooked.

But Martinelli, who has played a key role in Arsenal’s rise to the top of the Premier League, hit back.

“And you can be sure that I will do my best for the Brazilian team, in whatever I can help the team I will help. It will be a great experience for me.”

Brazil begin their quest for World Cup glory with a Group G clash against Serbia on November 24.

They then take on Switzerland four days later before facing Cameroon in their final group game on December 2.