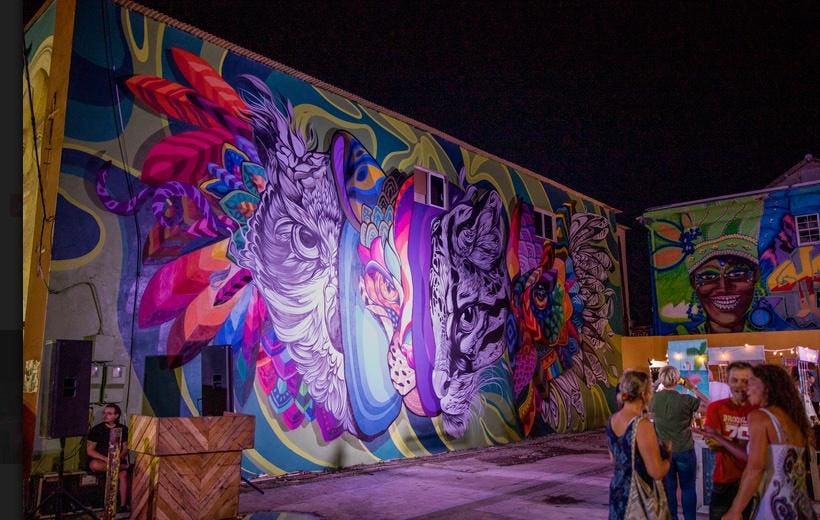 Event wise, Aruba is known for its Carnival season but another festivity is taking place for the first time in two years—and it recognizes art.

The Aruba Art Fair is again underway in the city of San Nicolas, as its streets have become the setting for three days of both visual and performing art demonstrations. A media release on the art fair lists nearly 200 artists and artisans participating in this year’s event.

2019 was the last time that the Aruba Art Fair took place. The 2022 edition marks a break from the two-year hiatus, happening from November 4 through November 6.

“We are excited to welcome the return of landmark events such as the Aruba Art Fair for the first time in three years and are thrilled to welcome travelers back to this colorful festival,” said Aruba Tourism Authority CEO Ronella Croes, in a media statement. “The Art Fair is a beautiful celebration of Aruba’s vibrant artistic spirit, and it highlights that Aruba’s cultural offerings are a draw for visitors.”

Art on view during the fair consists of 10 new murals in San Nicolas, making the total on view to 54. Participating artists who have contributed new public works include Fio Silva, from Argentina, ChemiS, from Kazakhstan, Leho, from Taiwan, and Isidora Paz López, from Chile.

During the art fair, tours of these murals are being conducted by Aruba Art Tours. One place to see them is at San Nicolas’ Promenade, in which this main spot serves as an a major outdoor gallery.

The fair also will feature ”Nature & Faces,” a photography competition in which contributors captured Aruba’s flora, fauna and people in photos.

Just before the fair started, an Art Fashion Show kicked off on November 2. The event known as “ART Fashion” centered on the theme of climate change. Eleven designers incorporated related topics into their fashions. Among them, Alexandra Suarez of Luxury Flying Dress focused on the theme of a biodegradable dress while Robert Nestor of Off The Grid presented a fashionable design based on the subjects of water and sea awareness.

Food is also a part of this festival, with a number of culinary pop-ups are taking place throughout the weekend.

The Aruba Art Fair marks an artistic development for San Nicolas, as this one-time hub for international workers at the long-closed oil refinery has evolved into Aruba’s cultural capital. This resurgence is propelled by its burgeoning arts movement, which has been pushed since the art fair’s inaugural year in 2016.

For more information visit the Aruba Art Fair’s website. Updates are also being posted on the event’s Facebook page.