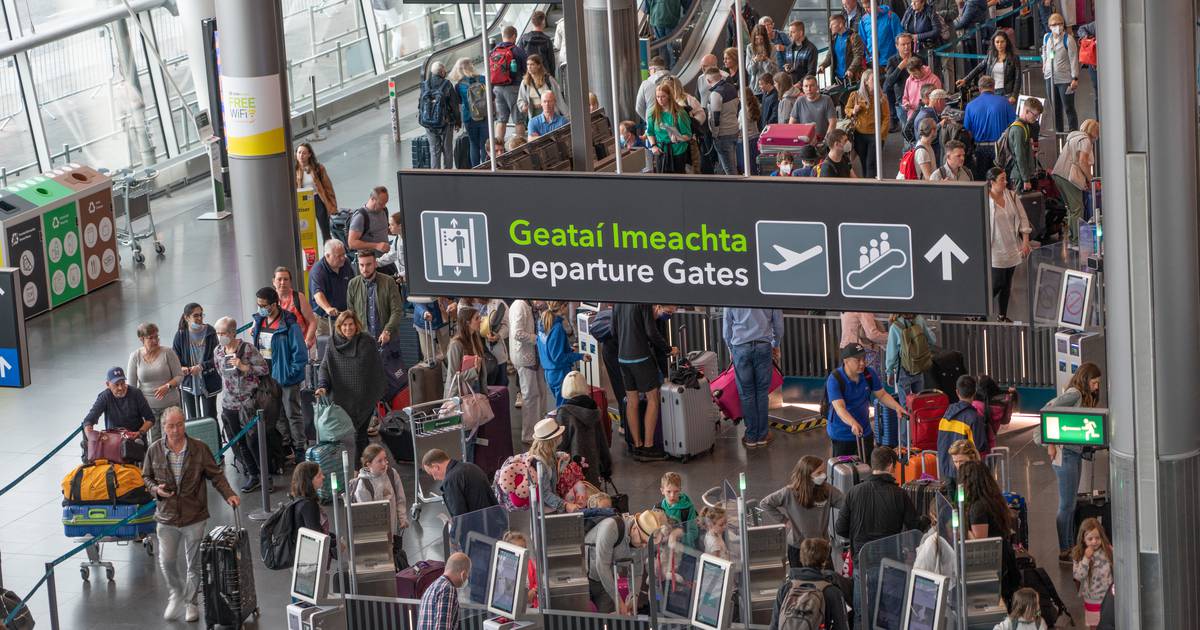 Those incongruous little sayings printed in fluffy white clouds on the sky blue walls of Terminal 1 come off as nothing short of shameless trolling in the face of the recent Dublin Airport mayhem. “Life is not about surviving the storm, it is about dancing in the rain,” reads one. “Don’t take anything personally,” reads another.

Don’t take it personally, the sign seems to mock, that arriving at Dublin Airport these days means being corralled, like cattle, dragging your luggage through a maze of steel barriers and tents before you even get inside the terminal. Don’t take it personally that the detention-centre aesthetic continues when you eventually get inside, with grubby floors, walls and toilets. Don’t take it personally if your flight is cancelled/your bag is lost/you are standing in a queue for hours to get through security. Don’t take any of it personally. It’s important to remember, the same thing is happening in other badly-managed airports around the world. Maybe instead of moaning on social media or bothering Katie Hannon about it on Liveline you could instead learn to dance in the rain.

In James Hilton’s 1933 novel Lost Horizon, Shangri-La was a fictional Tibetan land, a mythical earthly paradise. The people who lived there were immortal types, living hundreds of years beyond a normal average lifespan and ageing almost imperceptibly. At the risk of stating the bleeding obvious, Dublin Airport is no Shangri-La. In contrast, it is a place where you can see people ageing in front of your very eyes as they and their children wonder if they are really going to Greece or if their entire holiday — cancelled once or twice due to Covid and now scuppered again by a banjaxed Dublin Airport — was only ever a myth.

[ ‘We passed through the purgatory of Dublin Airport with ease, but faced a much bigger challenge after security’ ]

[ Dream trip to LA bookended by cancelled flights, lost baggage and a night on the airport floor ]

I had occasion to pass through the sorry mess that is our main airport last weekend. At a time when there should be a hopeful summer atmosphere about the place as people get to travel, many for the first time since the pandemic, the airport exuded holding cell rather than holiday vibes. The poor staff with their thousand-yard stares seemed exhausted and overworked. The queues — for bad coffee or tired looking salads or endless varieties of smoked salmon-based lunch items — were all too long. The music in the restaurants was turned up to an uncomfortable level as though management hoped to force disgruntled punters into submission by blasting them with 90s pop bangers.

Having said all that, my own brief experience was a breeze compared to that of all the families I saw with their small children and gigantic suitcases and grin-and-bear-it faces wondering if they’d ever get to where they were going. Heading, as I was, to London for a one-night work trip, I only had a small carry-on bag so didn’t have to worry about the queue for bag drop or about a suitcase going missing. And when checking in for my flight online the previous evening I had, by some miracle, managed to nab a fast-track pass through security for €6. Fast Track in Dublin Airport appears to now be sponsored by an accountancy firm. In fairness to them, walking through the accountancy firm’s brightly-coloured Fast Track scenario was the only time I felt vaguely relaxed. The rest of the time my nerves were jangling, wondering — as everyone else was — if my flight would actually take off.

It all feels deeply embarrassing. From Wednesday, 130 members of our Defence Forces, our actual soldiers, will be on standby to pitch in at the airport should there be security staff shortages. This is part of a six-week emergency plan aimed at preventing flight cancellations and reducing long queues. The plan has been approved by Minister for Defence Simon Coveney and it will be triggered if more than 20 per cent of airport security staff are out of work with Covid-19.

Recriminations are flying even if some of the planes are not. Labour leader Ivana Bacik said the Dublin Airport Authority — its logo, daa, has been lower case for some time now — had created the problem by making staff redundant. “This is not a natural disaster or an emergency like foot-and-mouth disease, or indeed Covid,” she said. “This is something that daa should have been planning for, but instead they were letting staff go.”

The all lower case daa wasn’t having any of it even though, as well as forgetting its capital letters, it would appear to have forgotten how to run an airport. Its “award-winning” @DublinAirport twitter account, a witty, compassionate and beloved account in happier, more innocent times, responded on Twitter to accusations of redundancies that “…the daa did not make 1000 people redundant during Covid-19. daa introduced a voluntary severance scheme during Summer 2020 at the height of the Covid-19 crisis as part of cost-cutting measures to secure the continued viability of the company”. As one Twitter user noted, this was probably not the right time to adopt such a wounded tone.

Boarding the plane at London City Airport, I wondered what it would be like when I arrived back home to Dublin. From the air, all was well. I got lost in that comforting view of Baily lighthouse, the Poolbeg chimneys and the mountains beyond. On the ground the comfort turned to carnage. While I strolled past with my carry-on bag, I watched exhausted crowds of returning holiday makers gather around the baggage claim area, wondering if their luggage would make it through. Piles of suitcases were stacked in one corner, waiting to be reunited with their owners. (On this matter @DublinAirport Twitter says “checked-in luggage is the responsibility of airlines and their ground handlers”.)

Everywhere I looked there were stressed out and tired groups of people trying to survive the storm. Army or no army it’s going to be a long, tense summer out at Dublin Airport. Just don’t take it personally, okay?