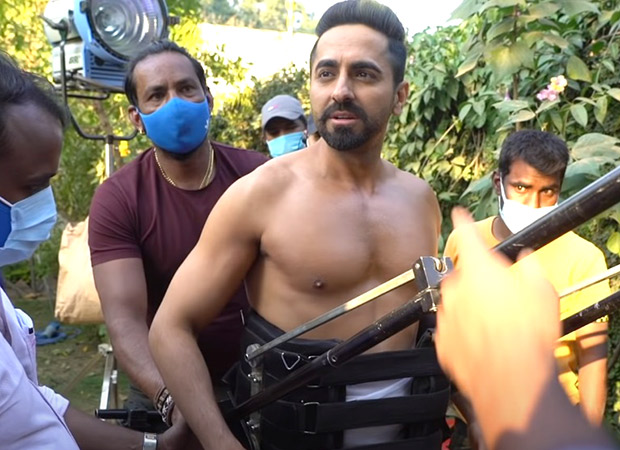 Actor Ayushmann Khurrana is known to experiment and present new stories and perspectives with every film of his. In his upcoming film titled Chandigarh Kare Aashiqui, he will be seen in a completely new avatar. The actor built a bulky body for his character in the film. Directed by Abhishek Kapoor, Ayushmann plays the role of a gym trainer, who is a weight lifting champion. He falls head-over-heels in love with Vaani Kapoor’s character who plays a Zumba instructor.

As an actor, Ayushmann is known to put forth his best efforts for every shot. And that’s exactly what he did for the peppy Holi number ‘Kheench Te Nach’ from Chandigarh Kare Aashiqui. Ayushmann carried a heavy camera rig on his bare body for a shot in the song. In the making video, Ayushmann talked about the pain that the rig attached to his bare body was causing. “The rig was very heavy and it gets stuck to your abdomen bones. It was really heavy and I was bare body, so it was all the more difficult. Otherwise, the shot looks really good,” Ayushmann said.

“Kheench Te Nach, yes, I think the minute it comes out, it is going to be liked by the club-goers. It is a mix of genres but the energy of the song is very very high,” Jigar added.

Talking about the song, director Abhishek Kapoor said, “Music is like a religion, people have their genres and as a filmmaker, I listen to all kinds of music. And even if I personally don’t take it with me immediately, I  feel that someone’s heart is pulsating on that kind of stuff. So, you try to understand the vibe, you get it because there is purity in it. Music can’t lie.”

Chandigarh Kare Aashiqui will be released on December 10 in theatres.