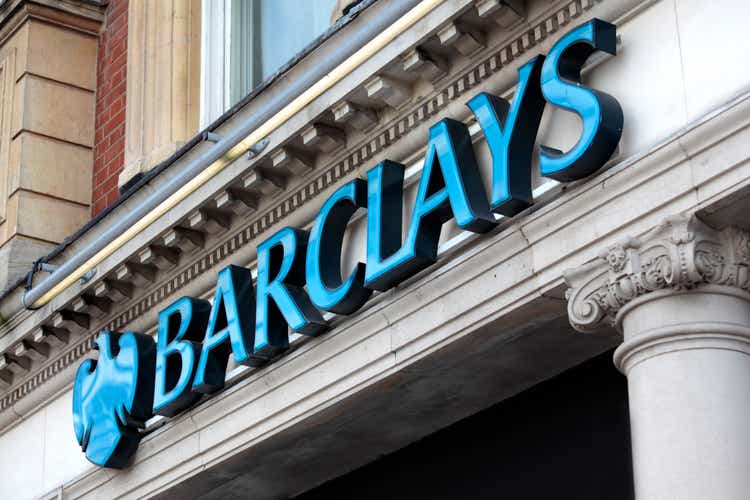 Barclays (NYSE:BCS) is currently valued at ~0.4x tangible book value. It is also poised to deliver a return on tangible equity greater than 10%. This translates to an earnings yield of ~25%, or a PER of ~4.

Notably, it is also buying back shares and is expected to continue doing so in the near future. For a bank that’s earning above its cost of capital, buying back shares at such a discount to book is highly attractive. In my view, management should be buying shares hands over fist at such valuations.

BCS, like many other banks, also benefits from rising interest rates.

The below slide from the half-year report provides an estimate of the sensitivity to a parallel shift of 25 basis points in interest rates:

Clearly, BCS benefits greatly from rising interest rates in the UK, but there is also a lag for the full benefits to come through. This is partly due to BCS’ structural hedge which is a rolling hedge with a maturity of 3 years. As you can see from the below slide, the structural hedge contribution has increased meaningfully in Q2’2022 and is expected to grow strongly in sequential quarters.

Note the UK rates have rocketed in the current year, as an example, consider the YTD movement of the 5-year Gilt:

BCS is not providing a projection of what the benefit of interest rates will translate to. However, my (conservative) back of the envelope, suggests an incremental pre-tax income of GBP 2 to 3 billion. Keep in mind that BCS’ total market cap currently is ~GBP22 billion, so this is nothing to sneeze at….

So Why Is The Stock Selling Off?

First, let’s have a look at the stock performance this year.

For most of 2022, BCS trades in tandem with large U.S. peers. That changed in recent weeks due to the UK mini-budget debacle that spiraled the UK Gilt market into chaos, demolished the GBP, and introduced a systemic risk premium in the UK banking system. Note that BCS, in GBP terms, is down 20% year-to-date and almost 36% in USD terms. Note that when investing in offshore equities, I generally hedge my currency exposure. In my portfolio, I have a tendency to keep a strong long USD position and adjust this tactically.

The UK banks are clearly a proxy leveraged trade on the UK economy. If you want to ‘short’ the UK or the GBP, a convenient proxy is the UK banks.

Aside from that, similar to the U.S. banks, the fear is of a deep recession and outsized credit losses. Mr. Market is evidently factoring in a recession and banks tend to sell off in the early innings and recover more quickly as well.

The key credit risk exposure for BCS is in the U.S. and UK Cards portfolio. The key takeaway is that BCS is on the very conservative side of provisioning for credit losses. BCS’ CEO, Mr. C.S. Venkatakrishnan is the prior chief risk officer of the firm and a JPMorgan (JPM) alumni and thus has strong discipline and rigor around credit risk management. This clearly reflects in the conservative loan loss provisioning numbers:

The current level of impairments is well below the pre-COVID19 run rates.

Importantly, the coverage ratios for both U.S. and UK cards are higher than peers. For example, Citigroup (C) has a total coverage ratio of 7.5% which is already conservative.

The Read Across From The U.S. Banks Earnings Season

The key takeaway is that tailwinds from higher interest rates significantly outweigh any potential loan losses even in a recession. The U.S. banks continue to cushion up reserves whilst over-earning on the net-interest-margin side.

FICC trading is also very strong, even though the likes of JPM and Citi are forced to leave some revenue on the table due to capital constraints. This should enable BCS to take some market share. Also, the retreat of Credit Suisse (CS) is a positive for BCS and I expect it (and Deutsche Bank (DB)) to pick up share there as well. Investment Banking (“IB”) is clearly challenged in this quarter and expected a significant decline.

On the Retail side, I do expect BCS to grow cards loan by a high single digit both in the U.S. and the UK. Payments should also deliver a strong performance given their leverage to nominal GDP which is rapidly growing due to inflation.

Note also that BCS benefits from a strong USD. It generates a significant part of its revenues from USD or capital markets which are denominated in USD. Whereas a big part of its cost base is GBP and Euro-denominated. For these reasons, I expect tangible book value to increase commensurately as well.

The recent sell-off of Barclays, in my view, is driven by the political risk premium introduced by the new UK Conservative government’s policies.

The good news is that it appears that the Bank of England (“BoE”) Chief, Andrew Bailey, has won the game of Chicken with the UK government with the sacking of the UK Finance Minister after 38 days at the helm.

Barclays is still trading at a distressed valuation, it buys back stock at a massive discount to net asset value, delivers returns above its cost of capital, and greatly benefits from the rise of interest rates.

It is also a dividend growth stock and I expect it to yield between 5% and 6% at current prices, which is likely to progressively grow from there. Naturally given the discount to book, buybacks are currently favored.

At an earnings yield well above 20% and conservative management of credit risk. I believe BCS is a strong buy.