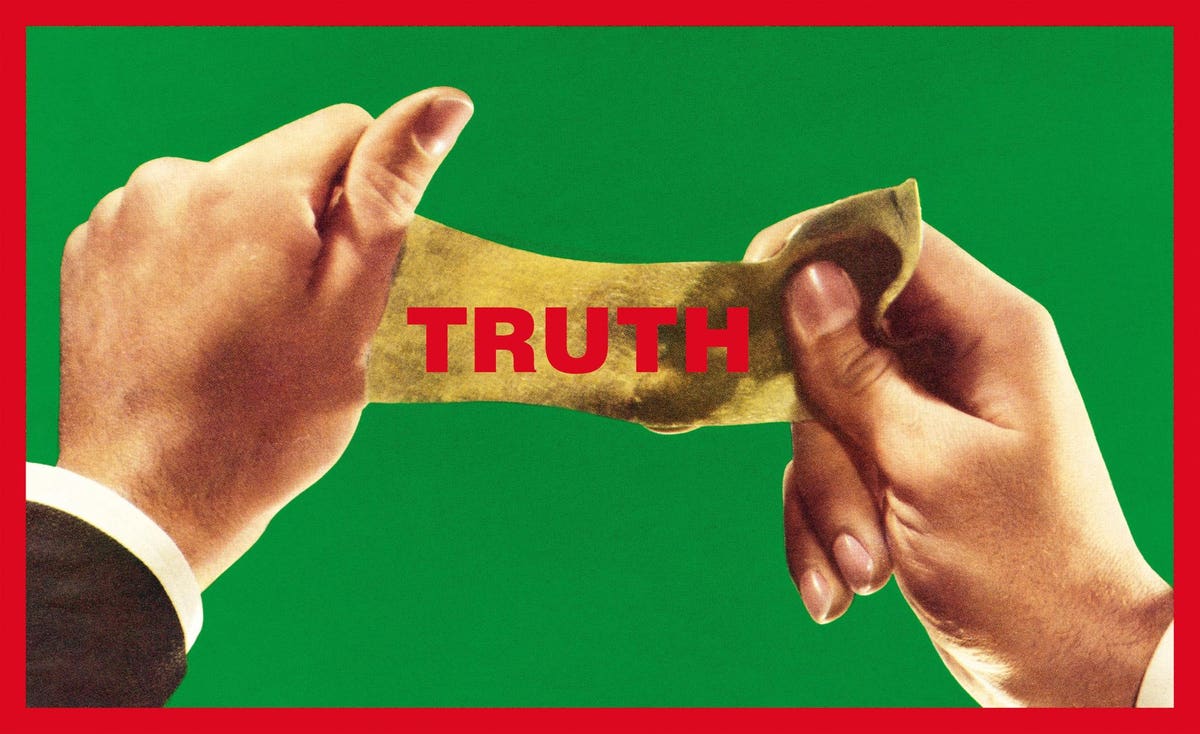 At Art Basel Miami Beach in 2012, a prominent Los Angeles gallery showed a large digital print on vinyl comprising two boldface words: “GREEDY SCHMUCK”. Unmistakably the creation of American conceptual artist Barbara Kruger, the print stood out even amidst the multimillion dollar products of Jeff Koons and Pablo Picasso. “Observers found the piece’s message especially apropos during this year’s ABMB,” recounted the Hollywood Reporter, dryly noting that “some decried the attention paid to big sales and the increasing onslaught of celebrity attendees.”

Kruger may be a conceptual artist, but she has never been accused of subtlety.

A major retrospective currently underway at the Art Institute Chicago – traveling to LACMA and MoMA in 2022 – puts Kruger’s signature bluntness on full display. Thinking of You. I Mean Me. I Mean You covers four decades of her verbal and visual confrontations. Some of these works have been so widely circulated, and so often reproduced, that you might think they’d entered the public domain.

To reclaim authorship, and to keep current, Kruger has remixed several of the most iconic. For instance, the slogan “I shop therefore I am” – which originated as a handheld card photographed in a 1987 screenprint and was repurposed for a paper shopping bag in 1990 – is now featured in a video that includes “I shop therefore I hoard” and “I love therefore I need”. “Your body is a battleground” – originally the text for a poster Kruger made in 1989 for a women’s march on Washington, superimposing the words on a split image of a woman’s face – is the subject of another video that also includes “Your will is bought and sold” and “Your humility is bullshit”.

Not that Kruger is limited to recapitulating past artwork. For example, she has created a new piece comprising two adjacent panels: “I HATE MYSELF AND YOU LOVE ME FOR IT” and “I LOVE MYSELF AND YOU HATE ME FOR IT”. In contrast to Kruger’s early work, these panels have no images associated with them, but instead rely on visitors for purposes of illustration. Collectively titled Untitled (Selfie), they are a backdrop for countless uninhibited poses, which are surreptitiously captured on security cameras and screened in another gallery.

Like Untitled (Greedy Schmuck), Untitled (Selfie) is pointedly directed at those who encounter it, creating a sort of feedback loop reminiscent of Nam June Paik’s TV Buddha (which featured a Buddha statue watching itself on a closed-circuit television), but with a sensibility more political than philosophical. This political impulse is shared by many contemporary artists (no small number of whom share her views), yet Kruger stands out for several reasons.

Most obvious is Kruger’s directness. Trained as a Condé Nast art director, she initially applied her graphic design skills to political posters, which she plastered throughout New York City. Kruger shows no patience for artistic obfuscation (in contrast to other artists who have used language, such as Christopher Wool and Bruce Naumann). Her political convictions are paramount. Her art exists for the sake of communication.

A related quality of Kruger’s work is the economy with which it communicates her values. The apparent simplicity of her slogans is no less artful than the popular poetry of Robert Frost or Billy Collins. In this immediacy, as well as her visual treatment, it also bears some resemblance to agitprop. But Kruger subverts these political posters by writing slogans that unsettle consensus and challenge conformity. In fact, some of her most memorable lines take the form of questions, such as the interrogatory MetroCards she designed for the New York City MTA in 2017.

Many have commented on Kruger’s knack for creating memes, anticipating the brevity of social media, especially tweeting. There is truth to this claim, and in the observation that times have caught up to her. As Kruger confessed to the New York Times in a recent profile, “I’ve always had a short attention span”. The important distinction – all the more pronounced as art merges with social media by way of the NFT – is that most of her work takes physical form, occupying space, whether a public billboard, a subway rider’s pocket, or a booth at an art fair. In that sense, it has kinship to both graffiti and site-specific art.

But they are also performative, becoming more interactive as her career has evolved. Their brevity has the quality of scores inscribed in the social landscape to be enacted by the public. This strategy of collective enlightenment through ironic transcendence of individual temptation is most obvious in the case of Untitled (Selfie), and only slightly less so in the case of Untitled (Greedy Schmuck), a work that was performed spectacularly when it was purchased for a reported $225,000. The sociopolitical message is ferociously reflexive.

The sheer scope of Kruger’s performance becomes evident at the Art Institute, where the video of Untitled (I Shop Therefore I Am) is flanked by Untitled (That’s the Way We Do It), a collection of appropriations of her aesthetics – such as the red-and-white logo for the streetwear company Supreme – which collectively seem to vouch for the existential function of the cash register.

The performative nature of Kruger’s work is its riskiest quality. Her aesthetics have abetted consumer culture, and her production of cultural commodities helps to drive the greedy art market. (A set of two expired MetroCards? That’ll be $375 on eBay.)

Setting aside the issue of personal responsibility, the most important questions are whether the work is effective according to the terms set by Kruger and whether those terms are admirable. Undoubtedly our society needs to reconsider assumptions that have led to inequality and injustice, to say nothing of the environmental destruction wrought by rapacious consumption. Her values are invaluable.

Whether Kruger’s strategy works is probably best addressed empirically. At present the results remain uncertain. The schmucks are still greedy, shopping still reigns supreme, and women’s bodies are more contested than they were in 1987. Kruger has not yet brought the world to justice. But at least she has a strong hypothesis and the conviction to devote her life to its fulfillment.