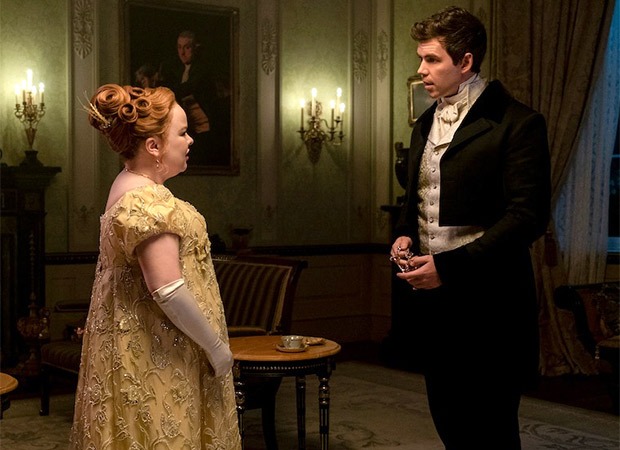 It’s confirmed! Season 3 of Bridgerton will spotlight the romance between Colin Bridgerton and Penelope Feathington. The news was confirmed on Sunday by Nicola Coughlan herself who plays the role of Penelope, alias Lady Whistletown.

According to Netflix TUDUM, at the Bridgerton For Your Consideration panel in Hollywood, Nicola Coughlan announced that Season 3 of the regency romance will focus on the relationship between her own Penelope Feathington and Penelope’s long standing crush, Colin Bridgerton (Luke Newton). This is an exciting shakeup from Bridgerton’s inspiration, Julia Quinn’s books of the same name; Penelope and Colin’s love story is told in the fourth book, Romancing Mister Bridgerton, rather than the third.

Coughlan learned she would be Bridgerton’s next heroine during what she assumed was a routine phone call last year with Season 3 showrunner Jess Brownell. With a few months to adjust to the surprise, the Irish actress now thinks a bumped-up Polin season makes sense. “I feel like if you see Penelope fawning over this boy for another season, you’ll be like, ‘Get it together! Come on, move on and get over it,’” Coughlan told Tudum before the FYC event. “Jess has talked to Luke and I through the season, and I think people are going to be really obsessed. I think book fans are going to be happy.”

Coughlan’s on-screen love interest is equally excited to dive into their starring season. “I love Polin,” Newton said brightly over Zoom in the days leading up to the announcement. His “favorite” hobby is occasionally peeking at the Polin ship hashtag. “There’s so much love for that relationship. Which brings its pressures because there are people that are really excited about this story to come to the forefront,” he said. “But also it really warms me.”

In the season 2 finale, Colin Bridgerton tells a group of men that he would “never dream of courting” Penelope which leaves her heartbroken. “That very last comment is what I’ve got the most stick about from fans since we’ve finished,” Newton said.

“Maybe that’s Colin’s excuse: He’s not looking for [love] at all,” Newton explained. “If he was actively out there constantly looking for the right person and she’s right in front of him, you’d be even more frustrated. Maybe he needs to focus on love and romance, rather than his business pursuits or his desire to travel.”

“I’m hoping that he has sort of a more sensitive side to him,” Newton said. “I love that we are exploring a relationship that so many people have had, where you form a friendship and you get to know each other down to the core. Then it sparks something from there.”

Actors Johnathan Bailey and Simone Ashley, on whom the season 2 was focused, will return in season 3 as Anthony Bridgerton and Kate Sharma along with the Bridgerton cast.