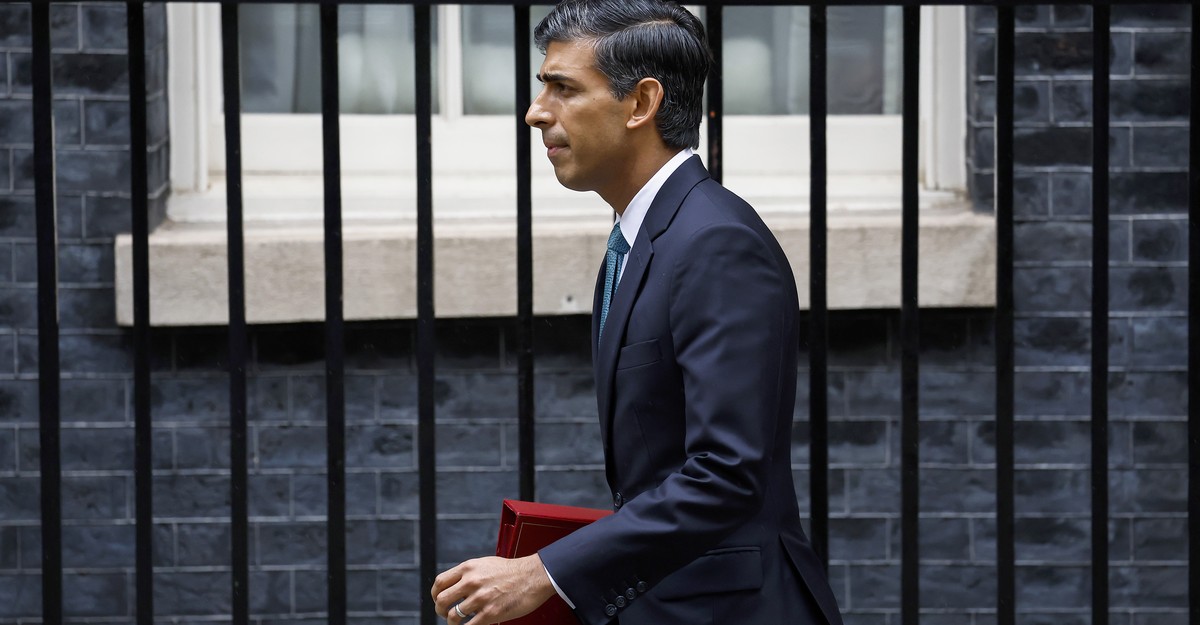 This week, Rishi Sunak was officially installed as the prime minister of Great Britain. I spoke with Atlantic writer Helen Lewis about the U.K.’s topsy-turvy political moment and her essay on Sunak as the face of Britain’s “new ruling class.”

Kelli María Korducki: Much has been made of Rishi Sunak’s ethnic identity; he’s the first Briton of color to become prime minister and, as a Hindu, also the first non-Christian. But he’s also, as you point out, spectacularly wealthy. How does Sunak fit into the British establishment (particularly compared with, say, Boris Johnson) in the public’s imagination?

Helen Lewis: Boris Johnson portrayed himself as a traditional member of the upper class—the kind of person who inherits their furniture rather than buying it. Of course, that was an act: In fact, Johnson believed in getting a Tory donor to buy his furniture, which was one of the many scandals during his time as prime minister.

Rishi Sunak represents something else: the conservative ideal of immigration, assimilation, and aspiration. I don’t deprecate the symbolism of his victory. Britain now has a Christian king, a Hindu prime minister, a Muslim mayor of London, and a leader of the opposition who married into a Jewish family. That’s huge! The last ethnic-minority politician to be prime minister was Benjamin Disraeli in the 19th century, but his family had to convert to Christianity to avoid the widespread anti-Jewish discrimination of the time.

But Sunak married a billionaire’s daughter and owns a $200 self-heating mug. With British politics dominated by the cost-of-living crisis, he is mainly seen as a rich politician, rather than a minority one. Maybe that’s progress too.

Kelli: There’s a line from your article that made me laugh out loud: “Every time I see him on television, I feel an atavistic urge to give him a wedgie and steal his lunch money.” What does Rishi Sunak’s persona—what you describe as a sort of “hoodie-wearing dorkiness”—tell us about this particular moment in U.K. politics?

Helen: I don’t think being seen as a nerd held Sunak back in the leadership election—because he follows a chaos dragon (Boris Johnson) and an ideologue who spooked the bond markets (Liz Truss). Frankly, I think his party was grateful for someone low-key and conscientious, who seems like he learns spreadsheet shortcuts for fun.

Kelli: Another line that jumped out at me in your article is your description of Sunak’s biography and career track as “a reflection of Britain’s constant desire to fuse modernity with tradition.” Can you elaborate on that?

Helen: He went to Winchester College, which is one of the smartest and most expensive boarding schools you can attend in Britain, and then Oxford University. That’s the biography of innumerable men called John and David in the Conservative Party. But it can now be the biography of a man called Rishi. He’s a member of our new establishment.

Kelli: You write that although Sunak’s views on Ukraine and the European Union fall neatly in line with those of his party predecessors, his domestic agenda is less clear. Is there any indication of what Sunak’s vision for Britain might entail?

Helen: He’s a Brexiteer by conviction rather than expedience, and less hawkish than Truss. His first challenge is that his chancellor (kept on from the previous administration) has to close a black hole in the nation’s finances. Sunak might instinctively be a right-wing, low-tax Tory, but he’s also the man who oversaw the COVID-furlough scheme, which paid people 80 percent of their wages not to work, and the misjudged “Eat Out to Help Out” scheme during the first year of the pandemic, where he subsidized people with government money to eat in participating restaurants. I mean, that was basically using taxes to give more people COVID. There is no appetite among British voters for low-tax libertarianism—Liz Truss found that out—and Britain is facing a tough winter, so his instincts are going to collide with reality.

The Defection of Mikhail Voskresensky

There was no place Mikhail Voskresensky loved more than the Moscow ​​Conservatory. He graduated from the school in 1958. For decades, he was the venerable chair of the piano department, specializing in the masters of 19th-century romanticism. His granddaughter served as his assistant, teaching alongside him. His young wife, a talented pianist from Vietnam, had studied there. In February, two days before Russian troops began flowing across the Ukrainian border, Voskresensky played a concert for hundreds in the Conservatory’s Grand Hall, an exquisite artifact of the imperial age, with soaring walls lined by portraits of the nation’s great composers.

Voskresensky wasn’t ethnically Ukrainian. But, in a story typical of the imposed multiculturalism of Soviet times, he was born in what is now Ukraine, in the city of Berdyansk, on the banks of the Azov Sea. More to the point, his mother was buried there. Whatever the propagandists proclaimed, he couldn’t think of Ukraine as enemy territory.

Read. Don’t Look Back, by Achut Deng and Keely Hutton, a new memoir for young readers that explores how to teach children about their parents’ trauma.

Watch. Season 2 of Abbott Elementary (Episode 6 airs tonight on ABC). As Hannah Giorgis puts it, “Minute for minute, there’s nothing on TV right now that brings me as much joy.”

I asked Helen if she’d read or watched anything recently that she might recommend to Daily readers, and she said:

I accept that this might be an odd thing to do, but I recently took a biography of the 19th-century philosopher Friedrich Nietzsche on holiday. And I loved it! I didn’t know about his friendship with Wagner (and how he later turned on him after a row about … self-abuse). And I only vaguely knew quite how badly his anti-Semitic sister distorted his work once he lost his mind. The book is I Am Dynamite!, by Sue Prideaux.

Helen notes that the book even contains echoes of today’s debates over the mental-health struggles of Kanye West, now known as Ye. When Nietzsche sent his friends increasingly bizarre notes, Helen told me, “they conspired to get him treatment against his will.”