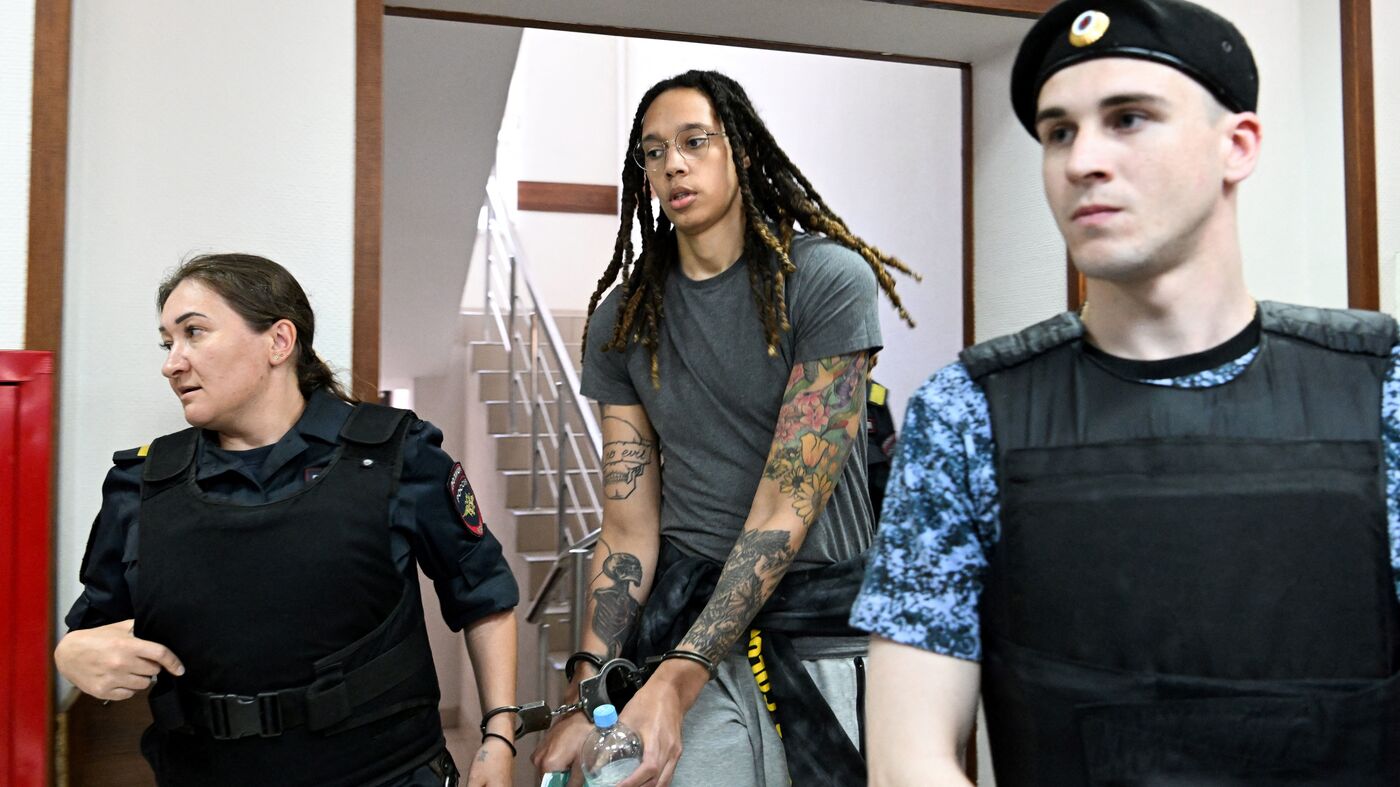 Basketball superstar Brittney Griner arrives Monday at a hearing at the Khimki Court, outside Moscow. Griner, a two-time Olympic gold medalist and a WNBA champion, was detained in February on charges of carrying vape cartridges containing cannabis oil.

Basketball superstar Brittney Griner arrives Monday at a hearing at the Khimki Court, outside Moscow. Griner, a two-time Olympic gold medalist and a WNBA champion, was detained in February on charges of carrying vape cartridges containing cannabis oil.

MOSCOW — Brittney Griner briefly appeared in public Monday, and moved one step closer to facing trial on drug charges in Russia. In a short court proceeding, a judge ordered Griner to be detained for the length of her trial, Griner’s legal team told NPR.

The next hearing is scheduled for Friday, July 1, Griner’s lawyer, Alexander Boikov, said. The trial will officially start that day, but it will begin with technical matters such as reading the indictment and reviewing case files, he added.

The news emerged from a preliminary court session that was closed to the public — but journalists did get a rare glimpse of Griner as the WNBA center walked through a hallway in the courthouse.

And 40 min later the preliminary hearing is over. No comment from Griner. Her Russian lawyer says the judge extended her detention for the length of her trial. No date set. Curiously, no US embassy officials present for the hearing. #BrittneyGriner pic.twitter.com/FSYprXjSgs

The Phoenix Mercury and U.S. Olympic team star was bracketed by four security officers and a dog as she was led down a stairwell to a courtroom for Monday’s hearing — a process that was repeated in reverse less than an hour later, as Griner was returned to detention.

Griner, who was handcuffed, did not respond to journalists’ questions. At one point she simply shook her head as she continued walking.

Griner has been detained for 130 days

Griner, 31, has now been held in Russian custody for 130 days — an ordeal that began one week before Russia invaded Ukraine. Her detention repeatedly has been extended, and her request for home detention was denied.

No U.S. Embassy officials were present for Monday’s hearing. A representative for the U.S. Embassy told NPR that it was informed the session was a “closed administrative meeting” and Embassy staff would not be allowed to attend.

“It was a technical hearing involving the prolongation of the arrest,” Boikov said of the session. “Not more than that.”

Griner was arrested on Feb. 17, after authorities at a Moscow area airport allegedly found cannabis vape cartridges in her luggage — prompting a criminal charge of smuggling drugs into Russia. She could face up to 10 years in prison if she’s convicted.

Why is Griner being held?

Other than a rough outline, few details are known about her case, feeding speculation that the Putin regime arrested Griner to use her as leverage.

Among the scenarios that have been discussed, one potential deal would see Griner exchanged for a Russian national imprisoned in the U.S. — notorious convicted arms dealer Viktor Bout, also known as the “Merchant of Death.”

Russia’s official Tass media has reported on a Bout-for-Griner exchange, saying that an official source had confirmed such discussions were taking place.

Like many WNBA players, Griner plays in overseas leagues during the U.S. league’s offseason, earning far more than her WNBA salary. In recent years, she has played for UMMC Ekaterinburg, a Russian team owned by oligarch Iskander Makhmudov. The team has had longstanding ties to Griner’s U.S. club.

What is the U.S. doing to get Griner out?

Griner’s precarious situation has raised a number of concerns in the U.S. — including worries that publicizing her case and issuing loud calls for her release might only make her more valuable to Russia as a pawn. Dozens of rights groups, including the Human Rights Campaign, the National Organization for Women and National LGBTQ Task Force, recently wrote a letter to President Biden urging him to approach her case with urgency.

In early May, the Biden administration declared Griner to be wrongfully detained by Russia’s government, signaling that the U.S. would get aggressive in the pursuit of her freedom and return home.

She’s being held as a hostage, the U.S. said. The State Department has said that the “Office of the Special Presidential Envoy for Hostage Affairs will lead the interagency team for securing Brittney Griner’s release.”

Russia has denied that characterization, insisting that it is only enforcing its drug trafficking laws.