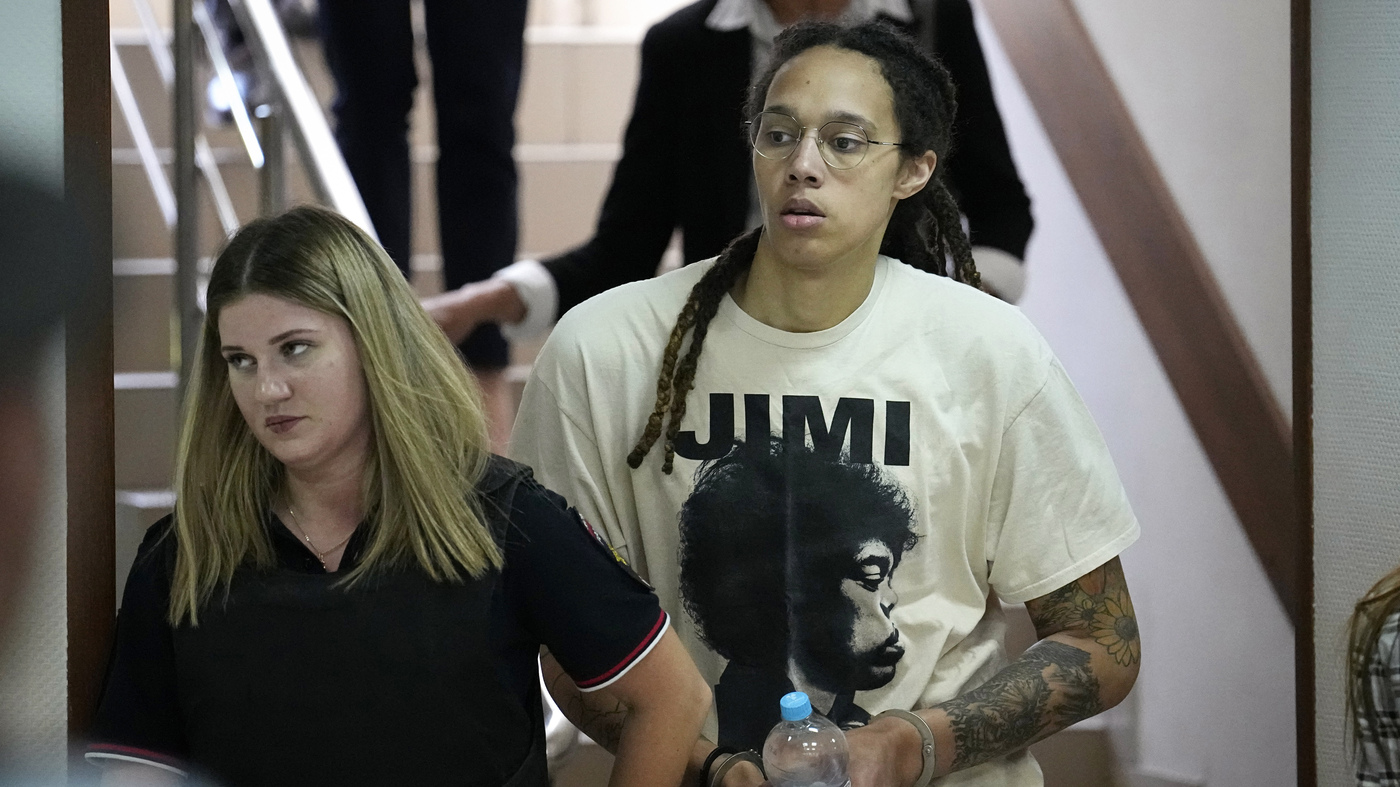 WNBA star and two-time Olympic gold medalist Brittney Griner is escorted to a courtroom for a hearing, in Khimki just outside Moscow, Russia, Friday, July 1, 2022.

WNBA star and two-time Olympic gold medalist Brittney Griner is escorted to a courtroom for a hearing, in Khimki just outside Moscow, Russia, Friday, July 1, 2022.

Brittney Griner has made an appeal to President Joe Biden in a letter passed to the White House through her representatives saying she feared she might never return home and asking that he not ” forget about me and the other American Detainees.”

Griner’s agent Lindsay Kagawa Colas said the letter was delivered on Monday. Most of the letter’s contents to President Biden remain private, though Griner’s representatives shared a few lines from the hand-written note.

″… As I sit here in a Russian prison, alone with my thoughts and without the protection of my wife, family, friends, Olympic jersey, or any accomplishments, I’m terrified I might be here forever,” Griner wrote.

“On the 4th of July, our family normally honors the service of those who fought for our freedom, including my father who is a Vietnam War Veteran,” the Phoenix Mercury center added. “It hurts thinking about how I usually celebrate this day because freedom means something completely different to me this year.”

The two-time Olympic gold medalist is in the midst of a trial in Russia that began last week after she was arrested on Feb. 17 on charges of possessing cannabis oil while returning to play for her Russian team. The trial will resume Thursday.

Fewer than 1% of defendants in Russian criminal cases are acquitted, and unlike in U.S. courts, acquittals can be overturned.

“We believe the Russian Federation is wrongfully detaining Brittney Griner,” NSC spokeswoman Adrienne Watson said on Monday. “President Biden has been clear about the need to see all U.S. nationals who are held hostage or wrongfully detained abroad released, including Brittney Griner. The U.S. government continues to work aggressively – using every available means – to bring her home.”

Griner pleaded with Biden in the letter to use his powers to ensure her return.

“Please do all you can to bring us home. I voted for the first time in 2020 and I voted for you. I believe in you. I still have so much good to do with my freedom that you can help restore,” Griner said “I miss my wife! I miss my family! I miss my teammates! It kills me to know they are suffering so much right now. I am grateful for whatever you can do at this moment to get me home.”

Griner has been able to have sporadic communications with family, friends and WNBA players through an email account her agent set up. The emails are printed out and delivered in bunches to Griner by her lawyer after they are vetted by Russian officials. Once the lawyers get back to their office, they’ll scan any responses from Griner and pass them back to the U.S. to send along.

She was supposed to have a phone call with her wife on their anniversary but it failed because of an “unfortunate mistake,” Biden administration officials.

Griner’s supporters have encouraged a prisoner swap like the one in April that brought home Marine veteran Trevor Reed in exchange for a Russian pilot convicted of drug trafficking conspiracy. The State Department in May designated her as wrongfully detained, moving her case under the supervision of its special presidential envoy for hostage affairs, effectively the government’s chief hostage negotiator.

Griner isn’t the only American being wrongfully detained in Russia. Paul Whelan, a former Marine and security director is serving a 16-year sentence on an espionage conviction.