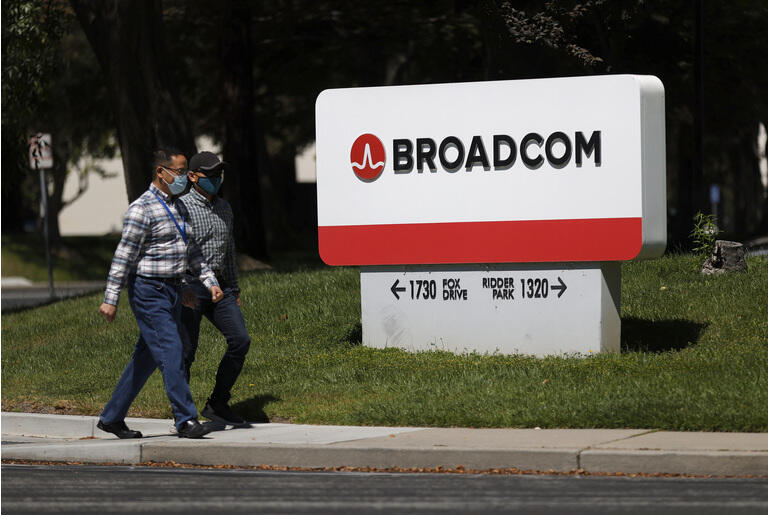 Broadcom Inc. (AVGO) reported a stellar set of earnings for FY21 in December that led the stock towards its momentum spike, as a slew of analyst upgrades accompanied. However, the stock was also caught in the semiconductor stocks correction recently, as investors rotated away from tech.

As a result, even a high-quality global tech company like Broadcom wasn’t spared. Its stock has also declined almost 20% from its all-time high (ATH). Based on our revised fair value estimate, it has dropped back nicely into our buy zone.

Therefore, we believe that investors who missed the last opportunity to buy AVGO stock can capitalize on the current retracement to add AVGO stock now. We discuss more below.

Broadcom reported a solid set of results for FY21 as its revenue surged by 15% YoY. It came off a relatively tepid FY20 as its enterprise customers, telcos, and cloud/hyperscaler customers stepped up their spending. As a result, Broadcom continues to see tremendous growth moving into FQ1’22, building on its FQ4’21 momentum. Notably, the company’s lead time continues to stretch, reaching 52 weeks in December. However, investors should not interpret it as a sign of weakness that it cannot meet demand. Instead, Broadcom emphasized that it has been operating at a 50+ week lead time throughout FY21. It’s part of the company’s disciplined order cadence to minimize its customers’ risk of hoarding inventory. Therefore, the company is confident that it is shipping into “real” end demand rather than excess inventory build-up. CEO Hock Tan articulated (edited):

We’re pretty much booked all the way through ’22 and into ’23. And that’s partly because: one, our customers are planning very far ahead. Two, our continued disciplined approach to ensuring that we deliver products at the right time to the right place, and we see that going on. By keeping lead times very stable and predictable as we are doing now, we’re also clearly communicating to our end users the way they should be planning their business. So, all this is to make sure we don’t overship and build up buffer inventory through our ecosystem. The day will come when things have to land, and we like to make sure it lands very gently and softly. (Broadcom’s FQ4’21 earnings call)

Therefore, Tan has again cautioned semiconductor investors that the excesses we are witnessing will be digested someday down the road. Broadcom is playing its role by not overloading the supply. With a 52-week lead time, Tan & Co. has ample time and visibility to navigate the potential slowdown in growth moving forward. Moreover, by controlling its inventory and focusing on its profitability, it has also driven robust adjusted EBITDA and free cash flow margins over time (see above).

The company’s profitability is so secure that management decided to raise dividends again for FY22 and committed to a $10B stock repurchase program. Tan emphasized (edited):

We have got tons of cash, and the gross debt has actually declined somewhat, while our cash position is building out. And while we may still do a deal in ’22, it’s just that we will still be generating a lot more cash in ’22. So, it’s just a very logical conclusion for us to not just sit on the cash, but return it to you guys as we continue to accumulate cash. And keep in mind, we still have a lot of capacity to grow our debt. (Broadcom’s FQ4’21 earnings call)

Therefore, Broadcom is one of those companies that are so well managed it’s difficult to fathom a chink in the armor. The company’s business is also well-diversified that it can leverage secular trends in consumer, enterprise, cloud, telcos, and hyperscaler customers.

Although consensus estimates point to “just” 11.8% YoY topline growth in FY22, we think it’s possible that it could have been understated. Broadcom has customarily not offered full-year guidance ahead of time. Nonetheless, BofA analyst Vivek Arya made an astute observation in the call. He estimated that Broadcom’s FY22 topline could come in between $30-$35B, given its usual FCF margins, predicated on its $10B stock repurchase and $6-$7B in dividend payouts. Using FY21’s FCF margin of 49%, we can derive a topline estimate of about $34B. But, AVGO’s FCF margin may improve in FY22, as it guided for an adjusted EBITDA margin of 61.5% for FQ1’22, ahead of FY21’s 57.1%. Therefore, it’s reasonable to assume that the consensus may have understated Broadcom’s potential in 2022.

As a result, we have also revised our implied fair value estimates for Broadcom stock. We were previously lukewarm to Broadcom’s thesis as we believe it’s not growing fast enough. However, we could be wrong. In a challenging environment, Broadcom stock could offer some respite for investors who wish to invest in a solidly profitable semiconductor company that’s not overvalued.

AVGO stock is trading at an NTM EBITDA multiple of 13.6x, which is just slightly above its 3Y mean of 12.4x. We believe that we have also used a reasonable exit multiple of 11x in deriving its implied fair value. Since the market has also digested the stock’s post-earnings momentum spike, we believe we are ready to revise our rating. Nevertheless, we must caution investors that the market’s near-term volatility could continue to wreak havoc if the timing is sub-par. Therefore, consider adding in phases if you intend to add AVGO stock.

As such, we revise our rating on AVGO stock from Hold to Buy.