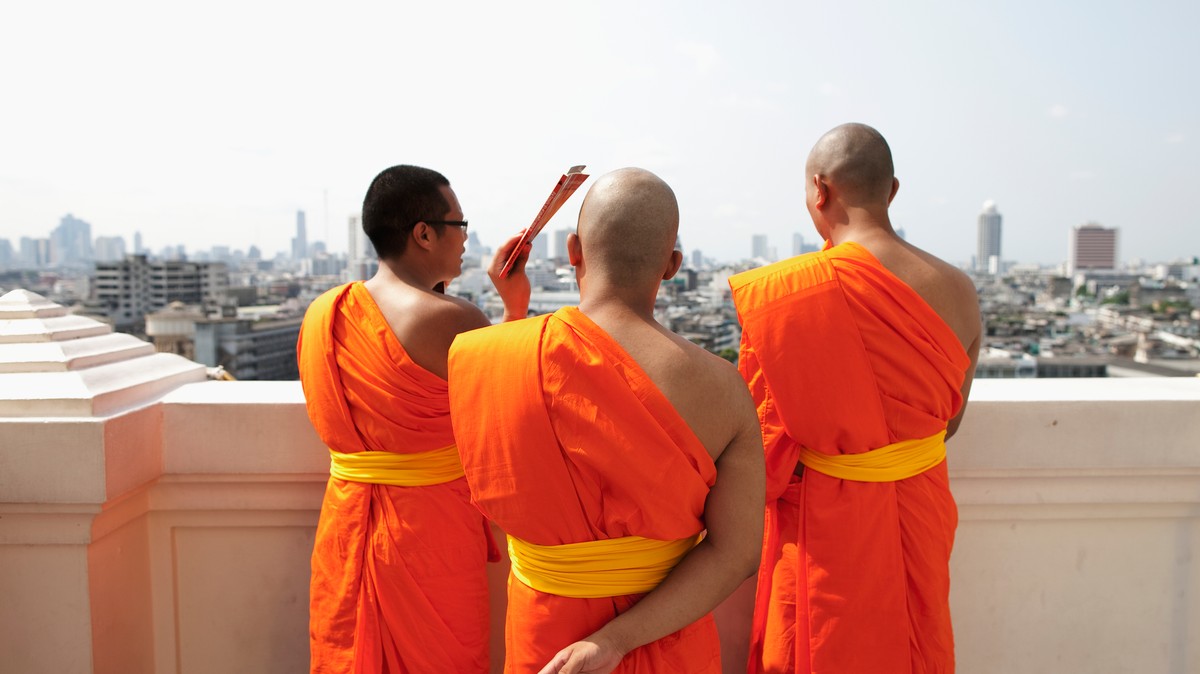 The monks, including the abbot, were sent to rehab after failing a urine test. Photo by Hugh Sitton via Getty Images.

A small Buddhist temple’s entire abbey of monks was defrocked, dismissed, and sent to rehab this week after every one of them tested positive for methamphetamine.

All four monks at a temple in Phetchabun province’s Bung Sam Phan district, in central Thailand, were forced by police to take urine tests on Monday. All four of them, including the abbot, failed.

The monks were subsequently sent to a health clinic to undergo drug rehabilitation, local official Boonlert Thintapthai told AFP, leaving the temple without holy men and raising concerns among local worshippers that they wouldn’t be able to conduct “merit-making”—that is, donating food to monks as a good deed.

Boonlert said more monks would be sent to the temple to allow people to carry out their religious obligations.

It’s not clear why police targeted this particular temple, nor these particular monks, to test for drug use—but the action comes amid a broader national campaign to tackle the trafficking of illicit substances.

Thailand, like many other nations across Southeast Asia, has in the past two years seen a major uptick in the volume of meth passing through the country. Much of that can be traced back to the Golden Triangle—a notorious fountainhead for the synthetic drug trade, where the borders of Thailand, Laos, and Myanmar meet—and, more specifically, the conflict-riven hills of Myanmar’s Shan state.

In the wake of the Myanmar coup, which in February 2021 saw the Burmese military overthrow the government and plunge the nation into chaos, record-breaking quantities of both crystal methamphetamine and meth pills, otherwise known as “yaba,” have continued to pour out of the Triangle and flood the region. Production and trafficking of illegal synthetic substances hit record levels in 2021, with authorities collectively seizing nearly 172 tons of methamphetamine and more than 1 billion yaba tablets.

This is not an isolated case of Thai monks behaving badly either. In recent years, the sacred institution of Thai Buddhism has been tarnished by a series of high-profile arrests and scandals relating to corruption, murder, and drug trafficking among its clergy.

In March, Luang Pu Tuanchai, a monk who rose to fame in 2020 after claiming to have omniscient powers, was charged with drunk driving and drug possession—and subsequently disrobed—after police found him carrying dozens of methamphetamine pills. Earlier in January, another monk was similarly disrobed after being caught consuming methamphetamine pills and selling them to local youths.

Such controversies have eroded public faith in Thailand’s Buddhist monks, with experts telling VICE World News in March that the nation’s Buddhist monastic order was in need of reform to weed out bad actors and restore the religion’s image of purity and righteousness.

“The ultimate goal of Buddhism is for the people to get enlightened,” said Somboon Chungprampree, a social activist and executive secretary of the International Network of Engaged Buddhists. “[But] most of the society is learning that not all those who are wearing saffron can be a holy or respectable person.”

Buddhism is the official religion of Thailand, and followed by about 93 percent of the population. The country is home to more than 300,000 monks.