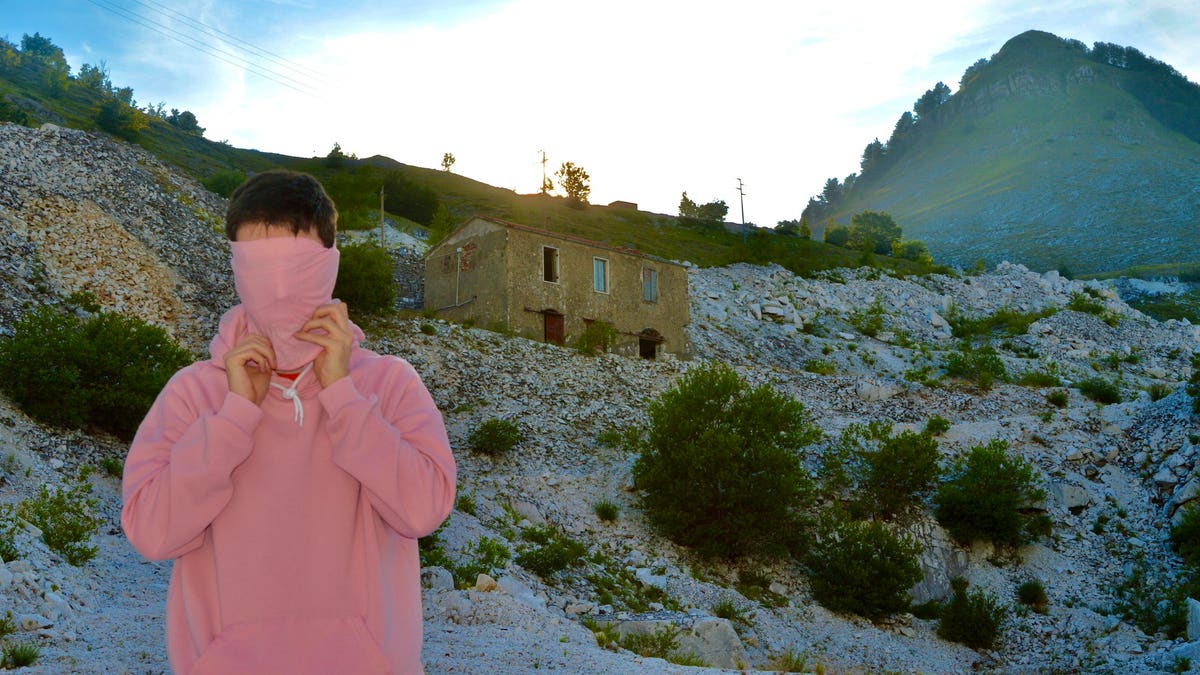 The anonymous and mysterious pink hoodie wearing artist camoufly releases his sophomore EP, The Giant, out today (August 20). The EP is texturally varied, boasting spellbinding and shimmering synths, high-pitched vocals, glittery soundscapes, bubbly production, playful sounds and zestful melodies. The Giant proves to be both full of charm while also hypnotizing as it takes listeners on a journey through mystical and otherworldly sounds.

The five-track body of work follows camoufly’s more light-hearted and high-spirited debut EP, Apotheosis. When compared to his latest release, camouflage says, “The Giant is more emotional and maybe even more touching in a sense.” Indeed, camoufly transcends stylistic borders, proving to be an up-and-coming artist to watch.

The EP represents the constant uphill battles and struggles we as society face daily, such as continuously having to work. This is not only seen in the music but also in the project’s title and artwork. The artwork is a Guilio Romano painting that depicts Zeus protecting Olympus against giants. While it may seem Zeus will be conquered by the giants, he prevails in the end. Similarly, camoufly’s sonic odyssey has an optimistic conclusion: despite our struggles, we should be proud of our daily achievements.

Here, camoufly shares with Forbes the inspiration behind The Giant, advice he would give his younger self and more.

Lisa Kocay: What was the inspiration behind The Giant?

Camoufly: “I’m going to compare it for a moment to Apotheosis, which is my debut EP. I did it when I was deciding if I was going to continue studying at my university, [but] I ended up dropping out. So it came as my passion for music was the main thing going on. That kind of music was me trying to get all my passion into doing music, while The Giant is more like something that is kind of more not sad, but maybe more heartfelt. It has a mixture of feelings behind it. In some ways, it can be more emotional and maybe even more sad.

“To respond to your question more directly, it just came from me making music while feeling certain feelings.”

Kocay: Can you share any stories on how some of the tracks on The Giant were created?

Camoufly: “‘Pyramids’ is the first track that I’ve done. I think I did it in October of 2019. For ‘Pyramids,’ I was just trying to make something sound very dark.

“I like the aura—the mysterious aura about this track. It makes me feel like I’m traveling in some tiny space in the dark, something that’s very mysterious, even like SciFi at some point.”

Camoufly: “Yeah, exactly. Something like that. I don’t know why I call it ‘Pyramids,’ but at some point this image is like flying through the waters of the world and at late night you go through the pyramids and you get something more about them that you might get when you’re not in your normal state. You get what’s like a flashing of images. I was thinking about this flashing of images, maybe about ancient Egypt or something like that. So it all made sense in my mind. So that’s why I called it ‘Pyramids.’”

Kocay: If you could go back in time to when you first started making music and give yourself one piece of advice, what would it be?

Camoufly: “Believing in what one does is really sometimes what does the most and [so does] doing a lot of stuff. If you want to do something, doing it a lot of the time you have is one of the keys, but I always struggled with reeling in my own vision. I was going from one thing to another in my life. That’s why I say that music before 2019, before starting this project, was kind of a hobby because I was making [music] maybe once, not even one song a month, and not even taking it as something serious. This project is me trying to do this my job—make it my life. I want it to be my life. I kind of changed all my vision of things—I had to. But if I wanted to say something to the younger me, it’s practice and practice and practice, and believe in what you think is cool. Don’t believe you have to change your style because something you do is not cool. You got to change your style when you feel like it, not necessarily when the environment around you needs you to change. Being independent as a state of mind is something really important, at least to sticking with your ideas and the way you see things.”