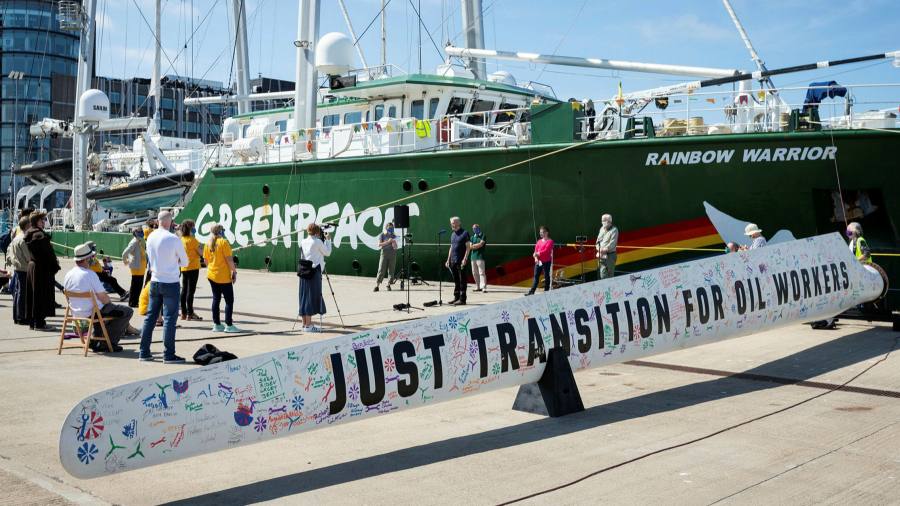 In the past, ships such as Greenpeace’s Rainbow Warrior III were often an inconvenience to North Sea oil and gas workers as they were deployed by the campaign group to disrupt projects and highlight the environmental harm caused by the energy industry.

But in recent months the Rainbow Warrior, a 58-metre motorised sail boat named after a previous Greenpeace vessel sunk by the French secret service in 1985, has been calling at ports in Scotland and the north-east of England to campaign for a “just transition” on behalf of North Sea oil and gas workers.

It may seem an unlikely alliance, but for environmentalists it helps further their aim to hasten a shutdown of the UK’s fossil fuel industry.

Greenpeace and other activist groups, such as Platform, are making the case to politicians that oil and gas workers are at risk of being “left behind” as the UK reduces its reliance on hydrocarbons to meet its 2050 net zero emissions target.

“Often people can have a misinformed idea that oil workers are all millionaires, but actually many are . . . from predominantly working-class communities,” said Mel Evans, oil team leader at Greenpeace UK. “They deserve to have their rights and their livelihoods protected through the energy transition.”

Offshore oil and gas producers, plus their suppliers, still employ more than 118,000 people in the UK, despite two price crashes since 2014 that led to the loss of tens of thousands of jobs. Some local communities, particularly in areas such as the north-east of Scotland, remain reliant on the industry for employment.

Climate activists want the UK to move faster to reduce fossil fuel extraction by banning all new oil and gas exploration. But as part of that push they insist the mistakes of the past, where whole communities were devastated by the closure of coal mines or steelworks in the 1980s and 1990s, must be avoided.

The latest campaign has meant they have found some common ground with former opponents. Trade unionists, while opposed to the call for a swift shutdown of the North Sea, want oil and gas workers to have the opportunity to change career as hydrocarbons production declines.

Some workers, such as 35-year-old Kenny Nicolson, have already made the leap from oil and gas, where he said he witnessed a lot of “boom and bust over the last 10 years”.

Nicolson, a project manager who lives in Aberdeen, started working in March for the power company SSE on a subsea cabling project that will transport electricity generated by wind farms off Scotland’s east coast up to 440km away to the north-east of England.

He sees a lot of scope for others moving across as he says his new job requires “very similar” disciplines to when he was in oil and gas. “In terms of skills, there are so many that are transferable,” Nicolson said.

Lucy Harper, an environmental adviser who works in offshore wind for BP after an eight-year career at the energy major working on oil and gas projects, said she had been on a “pretty steep learning curve” since moving into renewable energy.

But many of the things she needs to know in her new role, such as how UK regulations are formed, were very “analogous,” Harper added. “You have got that foundation to build off.”

Others are not finding the transition quite so smooth, particularly self-employed offshore contractors. Their numbers have grown since the 2014 oil price crash as companies sought to reduce their full-time workforces to cut costs, according to the unions.

Difficulties stem from the separate skills and accreditation bodies for different parts of the energy sector, according to several contractors. To switch they have to fund the training out of their own pocket to get the right certification, which often involves a lot of duplication.

“There is a lack of alignment between the different [skills] bodies involved,” one worker from Aberdeenshire, who spent nearly a quarter of a century in oil and gas, explained. “My family are from the mining towns in the central belt of Scotland. For me you can see the same thing coming again, except it’s my generation that is looking at it.”

A poll of 600 offshore workers by organisations, including Friends of the Earth Scotland and Platform, found on average each one was spending £1,824 a year on training. In the worst cases, campaigners said individuals had to pay as much as £14,000.

Self-employed contractors said that as there was not enough work yet to make a wholesale shift to renewables, they faced having to keep certification up to date for both industries. Moreover, once built offshore wind farms require much smaller teams than oil rigs to operate them.

Greenpeace and others have been campaigning for a transferable “offshore skills passport” to overcome retraining hurdles and government funding to support contractors.

“It seems to me that there must be synergies here, that if there are differences [between energy sectors] they are not such big differences [so as] to merit four-figure sums for the training to go with it,” said Richard Hardy, national secretary for Scotland at the trade union Prospect.

Accreditation bodies say they recognise the difficulties. John McDonald, chief executive of OPITO, the skills body for oil and gas, said it was a “complex landscape” given the size of the overall energy sector.

The industry has promised to deliver a “people and skills plan” to UK ministers by March next year. OGUK, the sector trade body, said its members were “hugely supportive” of “minimising the barriers to transferability”.

The government said the “North Sea Transition Deal” announced earlier this year was helping to support “tens of thousands of jobs . . . ensuring high-skilled workers and the supply chain will not be left behind in the oil and gas sector’s transition to a low carbon future.”

But climate campaigners claimed progress was too slow. “Part of the frustration . . . is they have been working on this for years,” said Gabrielle Jeliazkov, a campaigner at Platform.