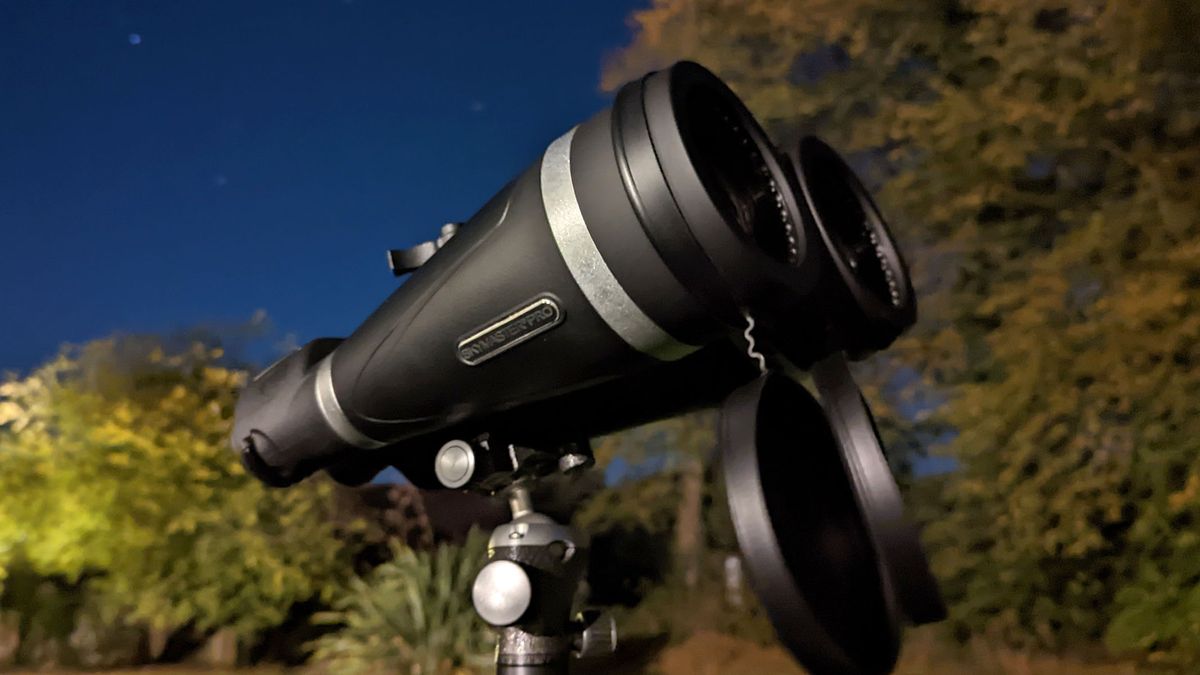 The Celestron SkyMaster Pro 20×80 binoculars are designed to do two things extremely well: gather light in the darkest of viewing locations and reach in to far-away subjects. It does this by using its 80mm objective lenses to drink in all available light, even from that of distant stars and galaxies and it magnifies the view by 20x. All this means the binoculars are large and heavy. Even strong adults won’t want to hold these binoculars up for long so using them all night (or all day) will require a tripod. Despite their heft though, they’re easily some of the best binoculars for stargazing that money can buy.

Due to their uniqueness, which is more akin to two telescopes strapped together than a traditional pair of binoculars, these may not be the best binoculars for everyone.

But for those that require the enormousness that is the SkyMaster Pro 20x80mm’s they also ship with objective lens caps, flare eyecups that are interchangeable, a rainguard, neckstrap and a lens cleaning cloth, as well as an instruction manual. Additionally, they feature a Reflex Sight Rail which we’ll talk more about below.

There are approximately 12 different types of SkyMaster binoculars that Celestron currently produces but there’s only one pair larger: the SkyMaster 25x100mm. If size isn’t an issue then that pair are the longest in the line-up, but the 20x80mm pair reviewed here are slightly smaller and lighter and, we think, make it more manageable to get good views.

At 86.4 oz (2449g) the SkyMaster 20x80mm’s aren’t lightweight, despite being constructed of polycarbonate and aluminum (imagine their weight if they were constructed of heavier metals). They also have dimensions of 13″ x 9.5″ x 4″ (330.2mm x 241.3mm x 101.6mm) so only teenagers and adults can really handle this beast of a binocular.

They are, however, waterproof so dodging inclement weather while out birding, spotting wildlife, or viewing the stars isn’t a problem. Neither is moving quickly between warm locations (home, the car) to cold (outside or at night) because the SkyMasters are purged with Nitrogen to prevent fogging which occurs inside the glass elements on binoculars that aren’t purged. This means that the binoculars will keep up with you wherever you’re going and don’t skip a beat.

They feel solid and robust in the hand. Rubber armor surrounds the binoculars’ polycarbonate and aluminum housing to make them knock-resistant and impervious to the bumps and scrapes they will inevitably encounter during everyday use.

Even knowing their high magnification and theoretical light gathering prowess, we were pleasantly surprised to see just how well the Celestron SkyMaster Pro 20x80mm binoculars performed in low light conditions. During the day distant objects were easy to find and track and gave minimal chromatic aberration (color fringing). At night though, we could easily spot stars within constellations, search for galaxies like Messier 31 (the Andromeda galaxy) and were lucky enough to have clear weather to see Jupiter and four of its moons: Europa, Io, Ganymede and Callisto which astronomers will know is an exciting moment.

While they were excellent and one hundred percent completed the task they set out to tackle, we did feel a little lackluster when using them for astronomy. It was almost as if we wanted more magnification from the binoculars to get even further into the night sky. This may have been because, while the night sky was clear, we may have needed to go to a dark sky reserve to truly make the most of them. But they don’t quite match up with a good reflector and powerful eyepiece to get those closer looks at planets and smaller deep-sky objects.

Lunar viewing, however, was magnificent. Sharp edge to edge, the SkyMasters magnified the waxing gibbous moon to such an extent that we were astounded when looking through the binoculars at the moon for the first time. It was a stunningly bright view that took a few seconds for our eyes to adjust to (never, never view the sun directly through binoculars). Once focused every crater and crevice along the lunar surface was sharp and detailed. If you want breathtaking views of the moon and the night sky for under $200 then you can’t go wrong with the SkyMaster Pro 20x80s.

Views are bright and clear thanks to the fully multi-coated optics using Celestron’s XLT coating technology on any piece of glass that’s exposed to the air. BaK-4 glass prisms give enhanced light transmission (compared with BK-7 glass) which is crucial when dealing with objective lenses that are 80mm in diameter.

The focus wheel has sufficient grip and can be operated smoothly and precisely with plenty of room for fine-tuning adjustment where necessary. The right eye diopter is adjustable as on many pairs of binoculars for accurate eye focusing between lenses, but it should be noted that the slightly larger SkyMaster 25x100mm binoculars have individual eyepiece focus adjustment. Objective lens caps hang off the end when not in use but can be easily slipped off for long-term use. Eyepiece caps hold firm and have a flexible rubber connection linking the two which makes it harder to lose them.

There are, of course, loops built into the binoculars for the supplied neckstrap but we do feel you’d have to be built like Mark Felix if you were planning on carrying them like that for a whole day. Much easier is to carry them in a dedicated bag or, for short trips, taking hold of the central rail for easy carrying.

Another feature not found on smaller binoculars is the Reflex Sight Rail (RSR) that acts like a balancing rail allowing the binos to mount to a tripod and users to perfectly balance them for ease of use. That’s essential when working with heavier, high magnification binoculars such as these because some tripod heads (such as ball-heads) may struggle to hold the binoculars at severe angles due to their length and weight. Astronomers will also find the removable rail helpful by attaching a red dot finderscope to the center support rod which, when aligned with the binoculars, can help users navigate to specific stars or deep-sky objects without having to guess their way round the night sky. We didn’t test out the finderscope during this review, but think having this for astronomical observations is very useful indeed.

Should I buy the Celestron SkyMaster Pro 20×80 binoculars?

As long as you’re happy transporting the binoculars in a separate bag or backpack and are comfortable also taking along a tripod to support the binoculars, then for the money we don’t see another pair that can compete with the SkyMaster Pro 20x80s. A long reach thanks to the 20x magnification and huge 80mm objective lenses make them ideal for low light observing and astronomy. For younger children or those that struggle to carry heavier objects these binoculars may not be the best fit. But for the money, they’re excellent value that will give the ‘wow’ factor when viewing the moon and other celestial objects.

These binoculars are for a specific purpose and this may not be everyone’s cup of tea. For those who want good optics at a decent price that are more easily transportable (and crucially able to be handheld) we’d recommend the Celestron Nature DX 12×56 which have good quality optics, are more affordable and easier to carry round the neck or in the supplied carry pouch.

Need something even smaller to slip in your pocket but don’t want to skimp on quality? The Nikon Aculon A30 10×25 (opens in new tab)s are a roof prism design which make them much more lightweight (10 oz) and compact.

For those that want pure quality at no expense we’d recommend the Canon 10×32 IS (opens in new tab) binoculars which have two types of image stabilization to keep scenes and subjects steady in view – ideal for studying subjects or tracking moving ones (such as birds). Though, at nearly $1000 we’re surprised they’re not Nitrogen purged which, as we found  in our review, can lead to frustrating fogging.