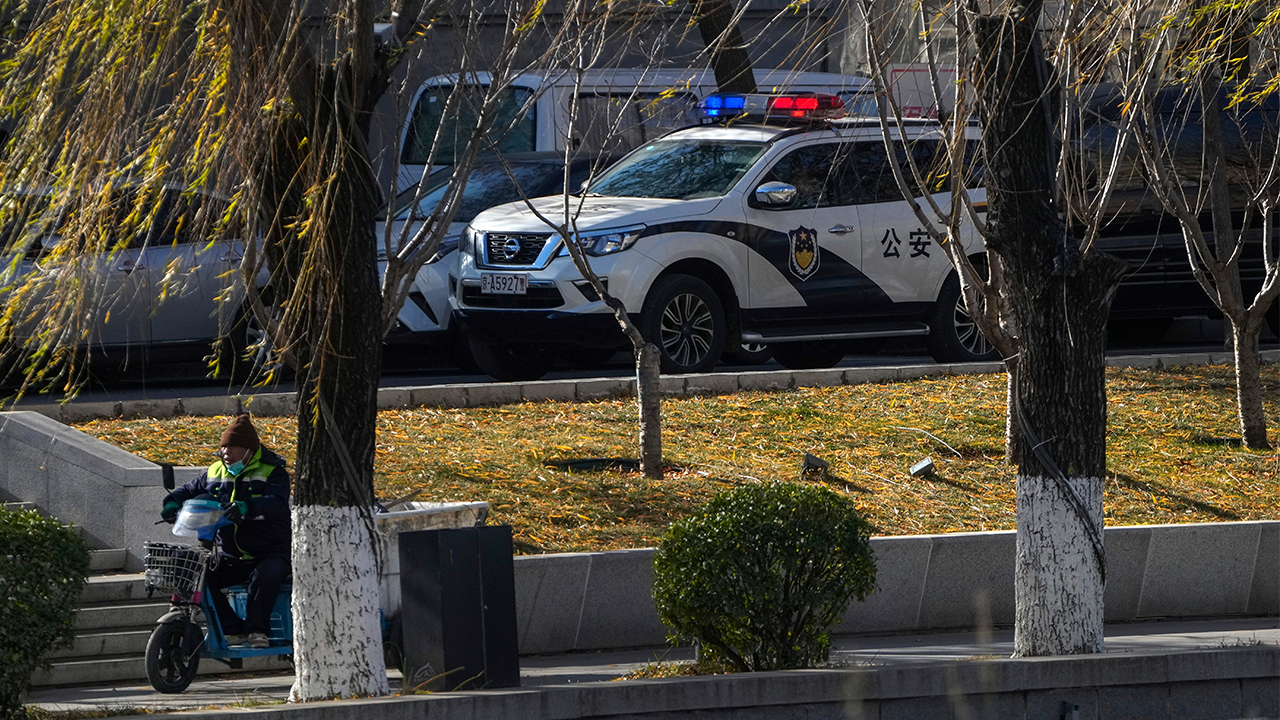 Over the weekend protesters in Shanghai called for Xi Jingping to step down, while students at Beijing’s Tsinghua university sang the national anthem in protest against the COVID-19 lockdowns and regulations.

China’s ruling Communist Party said Tuesday it would “resolutely crack down on infiltration and sabotage activities by hostile forces” amid large protests by citizens frustrated with the country’s strict coronavirus restrictions.

The statement comes during a show of force by security services to discourage more of the protests that broke out over the weekend in Beijing, Shanghai, Guangzhou and several other cities.

The Central Political and Legal Affairs Commission’s statement did not address the protests directly, but it does reveal the CCP’s commitment to enforcing its rule.

A police vehicle patrols along the riverbank near the site of last weekend’s protest in Beijing.

SUVs, vans and armored vehicles with flashing lights were parked along city streets on Wednesday as police and paramilitary forces carried out random identification checks and searched residents’ phones for photos, prohibited apps or other potential evidence of participation in the demonstrations.

Xi recently granted himself a third five-year term as secretary-general, potentially making him China’s leader for life. Still, he and the party have not directly addressed the demonstrations that have spread to college campuses and the semi-autonomous southern city of Hong Kong.

Most protesters criticized China’s “zero-COVID” policy that has led to a lockdown and quarantine, which has limited their food and medicine access while also hurting the economy and restricting travel.

A protester holds up a paper which reads “Not foreign forces but internal forcers” and “Abuse of Government power plunge the people into misery and suffering” during a gathering at the University of Hong Kong.

But some even called for greater freedom and democracy and for Xi and the party he leads to step down. Speech of this nature is considered subversive in China and punishable with lengthy prison terms.

Protests over the weekend were prompted by anger after at least 10 people died in a fire on November 24 in China’s far west, leading to questioning from the public about whether firefighters or victims attempting to escape were blocked by COVID-19 restrictions.

Some restrictions were eased and officials announced a new push to vaccinate vulnerable groups after the demonstrations but maintained that the “zero-COVID” strategy would still be followed.

People watch from above at a protest gathering at the University of Hong Kong.

The party had promised last month to reduce controls, but an uptick in infections led party members to strengthen restrictions. On Wednesday, the National Health Commission reported 37,612 cases detected over the previous 24 hours, and that the death toll remained unchanged at 5,233.

Police appeared to be attempting to hide their crackdown, with videos and posts on Chinese social media about protests being deleted by the party’s online censorship apparatus.