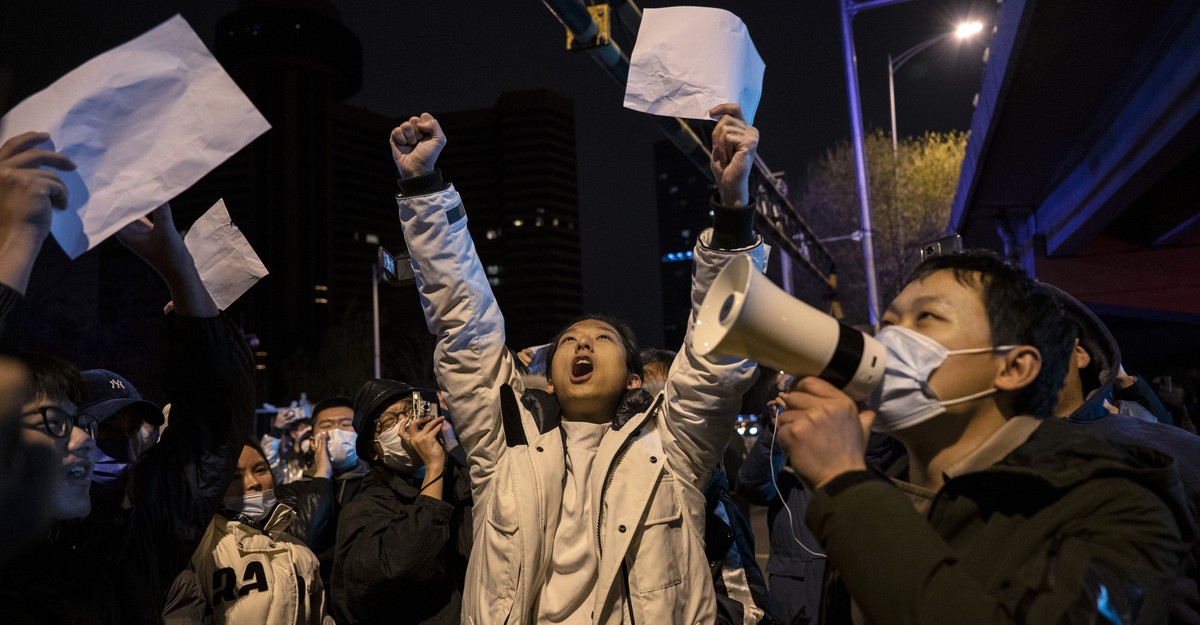 Something dramatic happened in China over the weekend: The people fought back.

Citizens frustrated by years of oppressive COVID-prevention controls erupted in protest across China. In the western metropolis of Chengdu; Guangzhou, in the country’s south; and Nanjing, in the east, protesters called for an end to the lockdowns that have paralyzed lives and livelihoods. In the capital, Beijing, they yelled, “We want freedom!” In Shanghai, protesters called for the resignation of China’s leader, Xi Jinping.

The outburst of discontent, rare in recent years, presents the biggest challenge to Xi’s power since his reign began a decade ago. The government touted Xi’s zero-COVID policy as a triumph of his stewardship and a mark of the superiority of China’s authoritarian system. Now the policy is breaking down under the weight of the excesses and abuses that autocracy breeds. Zero-COVID, designed to protect public health, is morphing into a contest between a repressive state and a complex society, arguably of a magnitude unseen in China since the Tiananmen Square protests of 1989.

Read: Can China ever reopen?

The crisis is Xi’s own making. Three years ago, when the COVID pandemic began in the Chinese city of Wuhan, his approach—to keep infections at or near zero—made sense. The virus was unknown, vaccines were unavailable, and China’s hospital system was unprepared. While much of the rest of the world struggled to contain the spread and suffered mass deaths, China was able to quell the initial outbreak and prevent a national health crisis.

Yet as the years wore on, and other countries turned to vaccines and improved treatments to manage the epidemic, Xi’s methods—quarantines, repetitive testing, and business closures—stifled the economy and disrupted the lives of millions in China’s major cities. Xi, though, refused to change course.

Much of the motivation was political. Reversing the policy could be interpreted by the Chinese public as an admission of error or failure—intolerable to a Communist Party that presents itself as infallible. The leadership seems to still believe that the virus can be defeated if the Chinese masses struggle and sacrifice. Other countries may have given up and allowed the virus to run rampant, but China is made of sterner stuff.

Indeed, the Chinese have tolerated zero-COVID and its detentions and disruptions to a far greater degree than most other societies could bear. What really pushed the public over the edge is the severity with which the approach has been enforced. The weekend’s protests started after a fire in a residential building that killed 10 people in Urumqi, the capital of the troubled Xinjiang region. The Chinese public widely believes that COVID restrictions impeded the rescue effort.

Residents of Urumqi, where many have endured more than 100 days of zero-COVID lockdown, came out to vent their anger. And it spread. The protest in Shanghai took place on a road named after Urumqi.

Abuses committed by the state in the name of public health have been commonplace. In the brutal two-month lockdown of Shanghai earlier this year, people were confined to their homes without sufficient food, sick children were separated from their parents and thrown into disorderly wards, and teams of health officers invaded homes of the infected to douse their dwellings with disinfectant. On a day-to-day basis, people’s lives have been at the mercy of the arbitrary decisions of unaccountable local wardens, police, and city officials. Recently, a friend in Beijing was shut in her apartment for 15 days because of a positive case in a building in another part of her housing complex. Another friend was confined at home for 10 days, seemingly on grounds of an infection in a building next door, then had the term inexplicably reduced to five.

Incidents of unfair treatment win nationwide sympathy. Earlier this month, a story about a milk-tea store in the northern town of Daqing that was closed by local officials who accused the shop assistant of acting too slowly to ask entrants to scan a QR code with their phone, the system used by the government to track infected people, created so much ire online that the officials were reprimanded.

China’s leaders have not been completely unresponsive to the souring mood. In mid-November, the leadership announced a plan to “optimize” COVID policy to eliminate some of its more excessive measures. But with local officials still tasked with suppressing infections to zero, the plan made only a marginal real-life difference, and in some respects created greater confusion.

Amid the chaos, the public began to push back. Residents of housing complexes signed petitions in which they pledged collective resistance against removal from their home to be interned at state-run isolation centers, dreaded by many Chinese. When another friend’s apartment block was locked down, the residents demanded that officials produce a government order quarantining the building. When the officials couldn’t provide one and characterized the stay-at-home edict as “advice,” she defied them and left her apartment.

The unrest and distress leaves Xi with the hardest choices of his tenure—none of them good, from his perspective. The Communist Party will always do what is best for the Communist Party, but at the moment, that option is not obvious. Xi can relent in the face of public pressure and ease off controls, but at a cost to his authority, and possibly at the risk of an uncontrolled COVID outbreak, which the party seems to consider a threat to its standing. Or Xi could crack down harder, imposing his lockdowns, but possibly invite even greater resistance from the public.

At the moment, the leadership is signaling that it intends to navigate a middle course: keeping the zero-COVID policy in place while moderating its rules to assuage public anger. The state-run China Daily newspaper, for instance, praised the policy for saving lives and argued that “the inconvenience caused in the local battle with the virus should be considered in the context of the bigger picture.” As the regulations are fine-tuned to become “better targeted and efficient,” it continued, “they should become less wearing on society.” Whether such tweaks will appease a dour public is uncertain. Equally doubtful is whether the blunt instrument that is the Chinese state can achieve such a delicate balance.

Also unclear is how representative the protests are of national sentiment. In the absence of independent polling, freedom of speech, or a free press, gauging how the Chinese public really feels about zero-COVID is impossible. That the policy would reach a tipping point when its economic, social, and political costs began to overwhelm whatever benefits the party believed it had seemed inevitable. Failing to anticipate that crisis, Xi and his team have blundered badly by leaving the populace unprepared for the possible consequences of a relaxation. The government appears to have little faith in its domestic vaccines but has refused to approve better foreign jabs for local distribution, probably for nationalistic reasons.

For now, the protesters seem mainly focused on the removal of pandemic restrictions. But calls for freedom from lockdowns can quickly escalate into calls for greater freedoms. In that sense, the COVID crisis is a test of Xi’s entire vision for China’s future. He has seemed intent on tightening the state’s grip on Chinese society and enforcing greater ideological conformity. But after four decades of “reform and opening up,” as the Chinese call it, China’s citizens have become too connected to the world and too self-confident to be herded like obedient automatons by an unfettered state.

Xi’s difficulties also point to a broader trend. At the start of 2022, autocracy seemed to be on the march around the world. Just after forging a closer partnership with Xi, Russia’s Vladimir Putin launched his invasion of democratic Ukraine. The world’s chief autocrats appeared to be banding together in an assault on the liberal world order.

Now, as the year closes, they are on the run. Putin faces domestic discontent, international isolation, and the embarrassment of a failed war. The ayatollahs in Iran are contending with a popular movement sparked by their brutality. Xi, the champion of authoritarianism, faces a challenge bred by the arbitrary rule that upholds the Chinese political system. Even apparently unassailable autocrats can push their people too far.