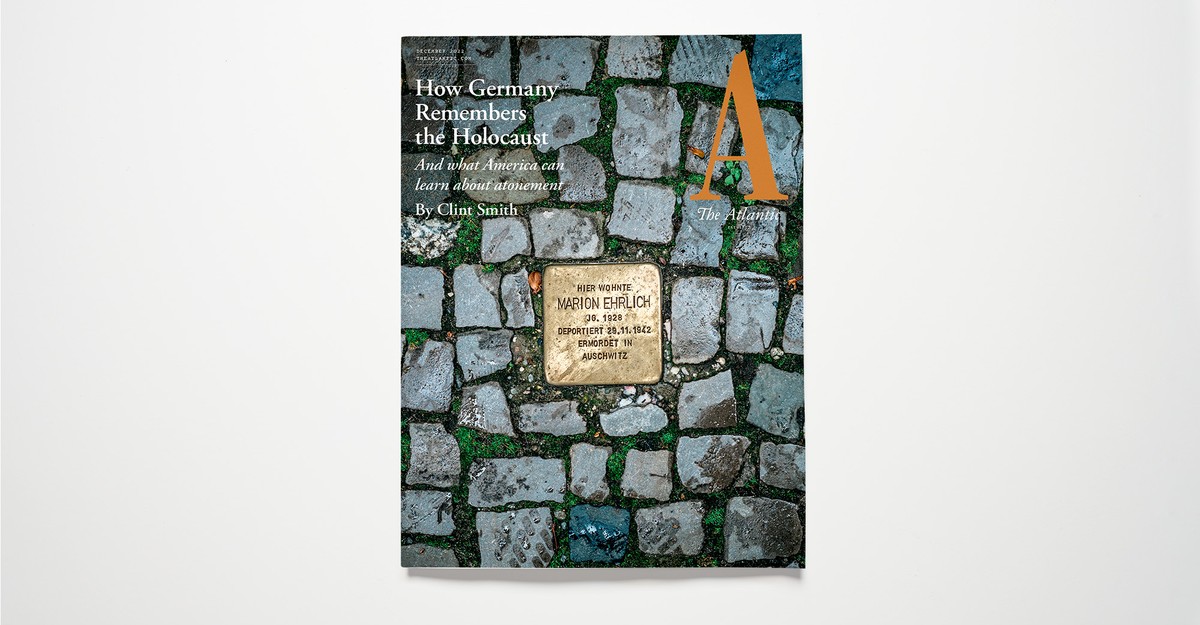 “It is impossible for any memorial to slavery to capture its full horror, or for any memorial to the Holocaust to express the full humanity of the victims. No stone in the ground can make up for a life. No museum can bring back millions of people. It cannot be done, and yet we must try to honor those lives, and to account for this history, as best we can. It is the very act of attempting to remember that becomes the most powerful memorial of all.”

Questions of public memory—“specifically how people, communities, and nations should account for the crimes of their past”—animate the work of the Atlantic staff writer, author, and poet Clint Smith. In a sweeping new cover story that builds on his best-selling book How the Word Is Passed, Smith travels to Germany to better understand the country’s efforts to memorialize the atrocities of the Holocaust, such that German citizens are faced with the memory of its victims in everyday life. As Smith considers where those efforts have succeeded and failed, he asks what America would look like if we could figure out how to memorialize the sins of our history. Smith’s December cover story, “Monuments to the Unthinkable,” asks how a nation can fully acknowledge and atone for its past.

“In recent years, Americans have seen a shift in our understanding of the country’s history; many now acknowledge the shameful episodes of our past alongside all that there is to be proud of. But reactionary forces today are working with ever-greater fervor to prevent such an honest accounting from taking place,” Smith writes. “America will never be the country it wants to be until it properly remembers what it did (and does) to Black people.”

Germany is often invoked as an exemplar of responsible public memory, recognized for its willingness to confront its horrific past. Visiting Berlin’s memorials and museums—accompanied by and in conversation with the people who helped bring these projects to fruition—and traveling to the site of the Dachau concentration camp, Smith comes to understand that “Germany’s effort to memorialize its past is not a project with a specific end point … Germans are still trying to figure out how to tell the story of what their country did, and simultaneously trying to figure out who should tell it.” And, he shows, it is often ordinary people––individual calls for reckoning and accountability, rather than government-led efforts––that have pushed the country to be honest about its past.

Throughout Berlin, Smith encounters the omnipresent Stolpersteine, or “stumbling stones”: brass plates set into the street and engraved with the name, birthday, and final fate of people who were victims of the Nazis. What started as an artist’s guerilla project was eventually sanctioned by local governments; today, more than 90,000 stumbling stones have been set into the streets and sidewalks of 30 European countries, making up the largest decentralized memorial in the world. Smith writes, “I thought about what it must be like to live in a home where you walk past these stones, and these names, every day. I imagined what it might be like if we had something commensurate in the United States. If, in front of homes, restaurants, office buildings, churches, and schools there were stones to mark where and when enslaved people had been held, sold, killed … I imagined New Orleans, my hometown, once the busiest slave market in the country, and how entire streets would be covered in brass stones—whole neighborhoods paved with reminders of what had happened.”

Smith leaves Germany with “a sense of clarity about the interconnectedness of racial oppression and state violence” and “a clearer understanding of the implications of how those periods of history are remembered, or not.” He distills what is perhaps the most important lesson about public memory the United States can learn from Germany: “Americans do not have to, and should not, wait for the government to find its conscience. Ordinary people are the conscience.”

“Monuments to the Unthinkable” is the cover story of The Atlantic’s December issue. For media inquiries or interview requests, please contact press@theatlantic.com.