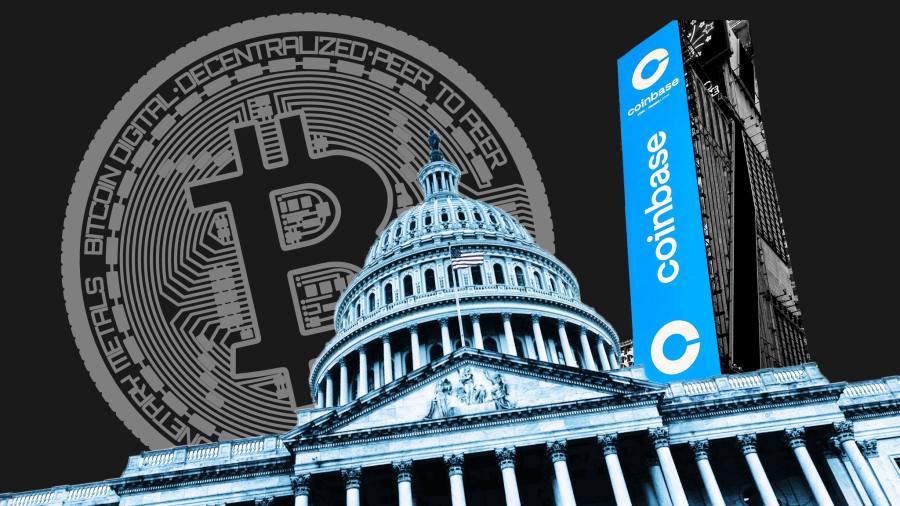 Hello and welcome to the FT’s Cryptofinance newsletter. This week we’re all Merged out and want to take a look a crypto’s lobbying to get what it wants from Washington.

Coinbase has been many things in its short life: crypto grown-up, emblem of the industry’s soaring confidence and its hubris in expanding too fast. It also has a role as its leading public lobbyist.

This week, the US digital asset exchange introduced a feature to its app that scores members of Congress according to their crypto friendliness, based on what they said in public.

“Over time, we want to help pro-crypto candidates solicit donations from the crypto community [in crypto],” explained Coinbase founder and chief executive Brian Armstrong in a series of tweets. “The crypto community is much bigger than Coinbase — hopefully we can all rally to engage elected leaders and drive sensible policies.”

If you thought that Coinbase was the company that declared publicly two years ago that its corporate culture would discourage political causes, you’d be right. Armstrong has explained away the apparent contradiction: “I said they should stay out of politics that are unrelated to our mission.”

The extent to which employees are required to work towards a company’s political goals is an important topic but for another time. For now, it is worth stressing how unusual this is.

Some advocacy groups keep sentiment scores on officials and their stances on sensitive topics such as gun control or environmental issues and publish the results as elections approach. It’s extremely rare for a private company to adopt such a tactic. Moreover, there’s no guarantee it’ll achieve its aims.

For the crypto market, dealing with Washington is a little like entering an alien world. The original Satoshi white paper solved a mathematical problem that had bedevilled those looking at digital cash for years but was equally a political document that encouraged supporters to bypass regulated financial institutions and provided a blueprint for a currency to do so. Disdain for Washington and banks is a feature of crypto culture, and the word is spread through social media, particularly Twitter.

The industry is learning that trying to work around regulation is fruitless. The number of lobbyists representing cryptocurrency proponents nearly tripled in three years, from 115 in 2018 to 320 in 2021, according to Public Citizen, the consumer watchdog group. The biggest crypto lobbying spenders were Coinbase, Ripple Labs, and Blockchain Association, each of which spent more than $2mn between 2018 and 2021, it added. Even so, it has some way to go to match the spending of many other industries.

Coinbase may want to help pro-crypto candidates but the flip side of the tactic is that it puts pressure on those officials that are more sceptical. That pressure would likely be applied through social media, the industry’s preferred weapon. Channels such as Twitter, which Armstrong used to promote the scorecard, thrive on anger and emotion.

This is what happened a year ago when Senator Rob Portman stuck a controversial provision to report crypto trades to tax authorities into the Biden administration’s $1tn infrastructure bill.

The thing is, the industry’s efforts to remove the clause failed totally. “Washington is not as influenced by social media as the private market,” said Charley Cooper, managing director of blockchain software group R3, and someone with more than 25 years of experience in the Beltway. It still pays to have in-person meetings or go for a beer to discuss issues. “It plays by an older set of rules,” he said.

Elsewhere in Washington, there’s a battle between the Commodity Futures Trading Commission and the Securities and Exchange Commission to persuade authorities who should be the main US regulator of crypto.

The CFTC looks like it is winning the race. Its chair Rostin Behnam is skilfully persuading those who matter by supplying information and resolving problems by explaining things face to face in the time-honoured Washington way. The difference in reception that he and his SEC counterpart Gary Gensler got from senators at their respective hearings this week was striking. Gensler got a far rougher ride.

The crypto industry prefers the CFTC to be its main regulator too, but if it gets its wish, it might well be in spite of its efforts and not because of them.

Have some thoughts on the issue? Email me at philip.stafford@ft.com

Soundbite of the week: Vitalik Buterin hails the success of the Merge

“The Merge symbolises the difference between early stage ethereum and the ethereum we always wanted it to become.”

It finally happened and there was no singularity that altered human civilisation. The Merge may turn out to be a consequential date in computing history. Equally, it could be little more than a footnote in the story of Ethereum. If nothing else, it uses up less energy and a lot of people are happy that a complex and long-running IT project went off without a hitch. But it now means Ethereum supporters have one less excuse if it doesn’t turn out quite as revolutionary as hoped.

If you’re trading crypto, how do you approach something like the Merge? It’s a fundamental event taking place at a known moment in time (pretty much) that is widely agreed to be beneficial if all goes well but has the potential to blow up in the architects’ faces.

One approach is to turn to the derivatives market, which allows you to place bets on the future direction of prices. My colleagues Laurence Fletcher and Josh Oliver ran through many of the strategies; go long, take short positions, buy-on-the-rumour, sell-on-the-news.

Its success didn’t mean good news for those who bet on the price of ether, Ethereum’s native token, which fell 9 per cent in the following 24 hours. Data from Kaiko Research, via Deribit, showed there were a lot of call options placed that the price would top $5,000. As Kaiko noted, ether would have to more than triple to reach this point, and so it appears these options will expire worthless.

That’s it for this week. Scott Chipolina will be back in the hot seat next Friday. Have a great weekend!