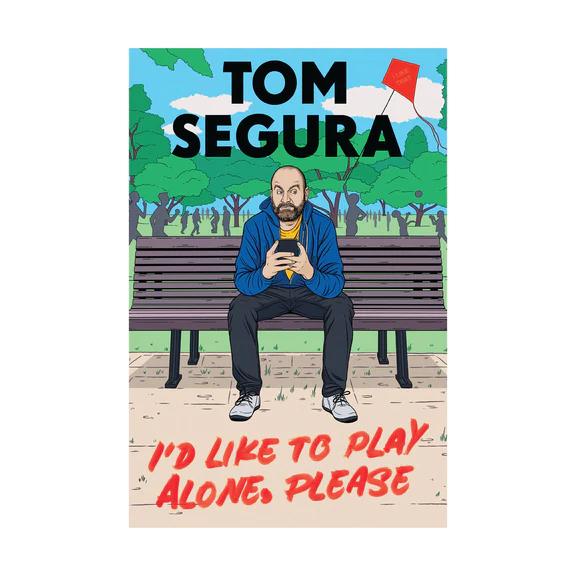 The other night Natasha, my adult-ish daughter, asked me to accompany her to a book author event for standup comic and podcaster Tom Segura’s best-selling “I’d like to Play Alone, Please” (Grand Central Publishing). It would take me too long to unpack all the dissonance and significance in that first sentence but suffice to say that this was so rare an event in every respect that I eagerly agreed.

The evening, hosted by Live Talks LA, and introduced by the ever-gracious Ted Hapte-Graber (whose glorious leonine pandemic-grown mane remains largely untamed) took place in the theater of John Adams Middle School (JAMS) Performing Arts Center in Santa Monica which is an 800-seat state-of-the-art venue as good as any performance space on the Westside of LA (my tax dollars at work).

Segura, who is one the most successful comics on the standup performance circuit, and who has four comedy specials on Netflix, the most recent of which is Ball Hog, was being interviewed by fellow comic Greg Fitzsimmons.

Spoiler Alert: Hilarity ensued. Fitzsimmons prodded Segura to recall one of the funnier incidents in his books, the night he got so drunk that he went home and slept with his friend’s much older Aunt. There was an extended discussion about lengthy bowel movements and those that occur as a series and the characteristics and sounds of each.

As Segura would be the first to say, and he has on several occasions, he is not a comic whose act is based on telling jokes per se or doing impressions or voices (although he is certainly a good mimic). He is a working comic who has been at it for decades, doing thousands of performances, night after night. His act is just him being funny, crude, telling a heightened truth about his own life, his family, and whatever else crosses his consciousness – the only constant is that he is going to try and say the funniest thing he can, and that really matters more than who he offends or what the truth is.

“I’d Like to Play Alone, Please” which I read in one sitting one Sunday is laugh out loud funny enough times to qualify as an entertainment in of itself.

Segura is impish and charming and clever and self-deprecating – and although this may sound strange there is a sweetness to him that comes through in his work. This sets him apart from emotionally aloof comedians, such as Jerry Seinfeld, or those full of bile like George Carlin. There is no theme to his work or his comedy specials, and he has not constructed a persona as many comics do. Yet once you’ve watched (or read him) there is a consistent voice that Segura adopts – one you may recall from the smart-ass kid in your middle school class.

Segura’s book is organized cleverly around his brief encounters with celebrities such as Chris Tucker, Mike Tyson, Serena Williams the comic Bruce Bruce, Jill Scott, the vast majority of which occur on planes in Business or First Class, and somehow become the basis for tangential revelations from his life. How Segura pulls it off says much about his abilities as a storyteller.

Fitzsimmons told about how he became convinced that Segura would succeed, when Segura, married and living in what Fitzsimmons called a “dump” (not his exact words but you get the idea) but had nonetheless invested in the best professional equipment for his podcast. Segura credits his work ethic to his father; and his sense of humor and ability to tell a story to his mother, a Peruvian who figures large in his comedy.

Fitzsimmons could not resist bringing up that despite Segura’s popularity his most popular YouTube video, seen by more than a million viewers is of his mother letting loose a lengthy and epic fart – I kid you not. And as I know you will now go and watch it, I’m sure you will agree it is hilarious. And the story of everything his mother made Segura buy her to make up for his posting the video is also side-splittingly funny.

You might think that Segura is not your cup of tea – but, again, it’s the sweetness and the charm that will make you stay till the end, and then watch more of his Netflix specials, and enjoy “I’d Like to Play Alone, Please.”

Last, but by no means last, it was great to attend a Live Talks LA event and laugh with a crowd – I had almost forgotten how good that feels and how much more laughing together we need.