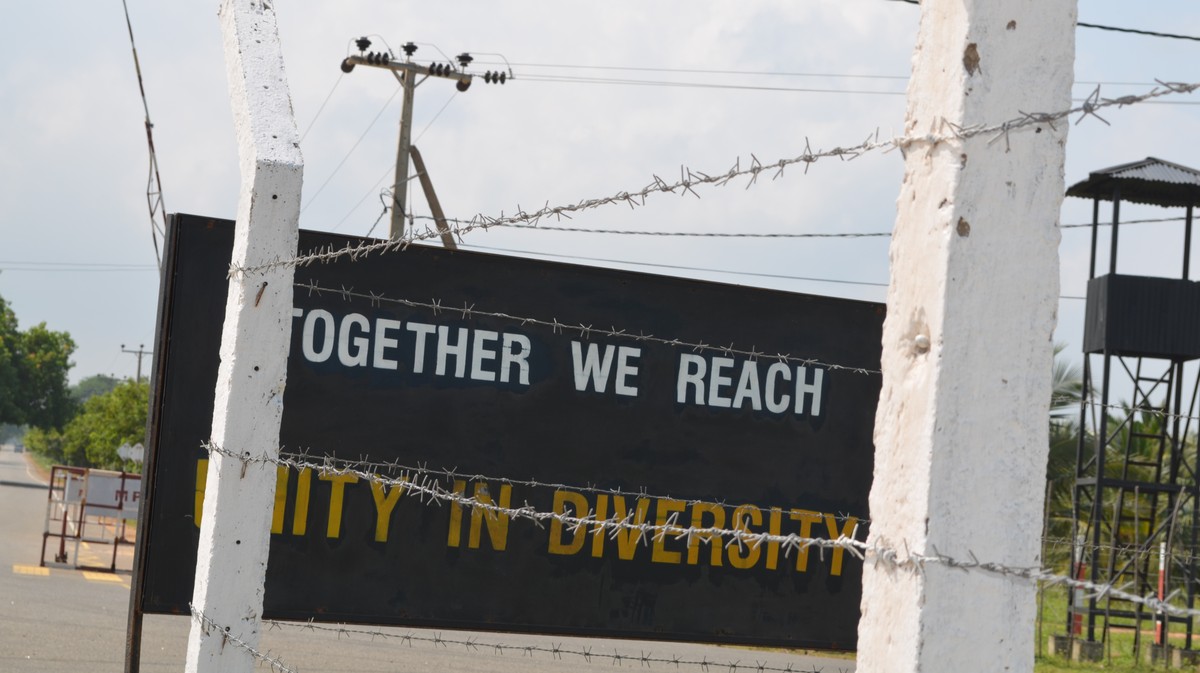 JAFFNA, Sri Lanka:  Using a bat made of coconut tree bark, 15-year-old Gunasekaram Shatheeskumar was playing with his friends outside his house. Three stones were on the ground to create a baseball-style setup.

That was 33 years ago, and his family have never been able to return to their home and ancestral land in Palaly, a small town north of Jaffna in Sri Lanka’s Northern Province.

The explosions in 1990 were the start of the second phase of the civil war between the Sri Lankan military and ethnic Tamil separatists that ravaged the island from 1983 to 2009. Almost all of Palaly’s 44,000 residents who were mostly Tamil, either fled or were evacuated by the Sri Lankan government in June and July 1990.

Shatheeskumar, who is now 47, says his house no longer exists. The land that once belonged to his family is now part of a massive barricaded military camp. Imposing barbed wire arches stretch over the camp’s entrance, just opposite where Palaly Junction used to be, a popular spot for fishermen to come and sell their produce. As Shatheeskumar looks into the distance, a motorbike drives into the camp.

“Where that motorbike is going is where our house was,” he told VICE World News, squinting at the sun. “You can only see the place from here because you’re not allowed to go past this point.”

Army land grabs are widespread across the north and east of Sri Lanka, where most of the country’s ethnic Tamils live. The military says they are there for security, but Tamil landowners VICE World News spoke to said their precious land has been in military possession for 33 years and is being used for farming and economic activity by the military.

More recently, land owners organised by area into unions and organised protests to demand the return of their land. In November, university students led a protest outside a government building near Jaffna amid concerns that the seized land would now permanently be occupied by the military.

Even though massive citizen-led protests that launched last year over the economic crisis have died down in Sri Lanka’s capital Colombo, most Sri Lankans are still struggling to make ends meet. And the situation is dire in Tamil areas.

Tamils make up 15 percent of the population of Sinhalese-majority Sri Lanka. Many of these seized areas, like Palaly, are now designated as a high security zone by the military. Some land has been released since the end of the war, but the army also continues to seize and acquire more land using government decrees and orders.

C.V. Wigneswaran, a former chief minister of the Northern Province, told VICE World News he believes the army is acquiring land, “to help the government in its ethnocratic pursuits.” The 83-year-old Tamil judge and current member of parliament continued, “The idea is to chase off as many Tamils from their traditional homelands as possible by land grabbing and harassment by the military and others. Future looks bleak. Unless the Tamils get back their lost lands and their control over them quickly the Tamil areas would soon be colonised by Sinhalese.”

Shatheeskumar claims that the army is using their land for farming and business purposes, and says he believes his house was demolished after 2009. At the beach, he points out tiles and stones that he believes belong to demolished houses, and that were flung into the sea by the army.

The closest Shatheeskumar has gotten to his home was overhead, after the war ended, when he flew into Palaly from the capital Colombo.

“When I travelled by airplane, I could see all the houses and buildings clearly,” he said. “I flew about four or five times from Palaly to Ratmalana, and the plane swooped low towards where our house was, and you could see everything clearly. There was the Saint Sebastian church, and the paint was peeling off and dancing in the wind, but now that church isn’t there anymore.”

Although Shatheeskumar now lives in Jaffna town, and many others originally from Palaly have shifted to other parts of the north and east, or even abroad, some have stayed or returned to the town after the end of the war.

Ponipas Mary Yogarani, 43, and her husband Mathuranayakan Mariyaseelan returned with their children to Palaly in 2019. Both of them are native to the area, and they now live in a hut on a government-allotted plot of land they were given in exchange for their ancestral lands. They are now building a permanent house using the one million rupees ($2,720) they were given by the government, but the actual cost of construction has increased due to runaway inflation in Sri Lanka amid the current economic crisis.

“Our land was next to the church of Our Lady of Good Health,” Yogarani told VICE World News. “When we go there, we’re reminded of when we used to run and play, and of the time we spent with our parents and siblings. Then we were displaced and went from place to place. When I go and look at it now, I feel so sad.”

Although the family are thankful for the land they have been given, Yogarani’s 13 siblings are spread across other areas of Sri Lanka’s north and east, and she hopes that they will be given land so they too can return to Palaly.

“If they had given us the land back, we could’ve gone and lived [there] with my mother for a bit,” Yogarani said , bursting into tears. “My mother wanted to go and live in her own house, but now she’s dead.”

Her husband Mariyaseelan estimates that the family has moved house about 20 times since their initial displacement in 1990, living largely in huts. They still have not been given a permit for their current plot of land, but believe they will receive one soon.

“Our farming lands are now under army control,” Mariyaseelan said. “If the portion of land they occupied when we left in 1990 was one percent, it’s now more than 50 percent. People are longing to come back to their own soil, to Palaly, but they still can’t.”

VICE World News reviewed multiple deeds from former residents that certified that the land occupied by the military belongs to their families, but this has not resulted in the land being returned to them.

Speaking to VICE World News, an army spokesperson based in Jaffna, who wished to remain anonymous, said that a government-issued gazette in 2013 had led to the acquisition of more than 6,000 acres of land in the Jaffna peninsula, but that more than 3,000 of this has now been returned as the security situation has improved.

“When the war was going on, we established the camps, and at that time, nobody was there in those particular areas,” he said, confirming that houses in Palaly had been demolished, but that it would have happened before 2009. “We had to use that land for our purposes due to the terrorism. After the war finished, we released much of the land.”

He confirmed that the army was using the land for farming purposes, but claimed that the harvest was then sold at reduced prices for the benefit of the civilians or distributed directly to them, and was not for military profit or consumption. He added that the army was keen to “build up a good relationship” with civilians and was building houses, distributing food items and donating school bags amid the ongoing economic crisis.

“If [Heroes Day] is not happening, then we can minimise the deployment of the camp areas,” he said. “Just go and see those people, what they are doing. These [commemoration] things should not be happening in the Jaffna peninsula. They [Tamils] think that those people [the LTTE] will come again.”

Mariyaseelan quickly dismissed the claims of the army providing protection to the Tamil people in the area.

“We can’t accept on any level that they’re here to provide security for the Tamil people,” he said. “Apart from protecting themselves, we can’t say they’re protecting us at all.” He added there are no problems between the army and the locals, and his wife said that the army sometimes gives them food provisions.

Although incumbent President Ranil Wickremesinghe has initiated national talks between Sinhalese and Tamil parties with a view to reconciliation, Tamil politicians have accused him of also ordering further land grabs.

For most former residents, the greatest fear is that they will not be able to return to their native land during their lifetime. At the university protest in November, 70-year-old Kumarasamy Gunaratnam, who was displaced in May 1990 from Myiliddy, which neighbours Palaly, said he was “still running, running like we were when we first left.”

He told VICE World News that two generations of his family have now died, away from their ancestral land, and he fears he’ll be the third.

“My father died at 98 years old, he was living with me after having left his native land,” he told VICE World News.

“As he was dying, as life was going out of him, and he took his last breaths, he said he wanted to be buried in the soil he was born on. I couldn’t make it happen.”