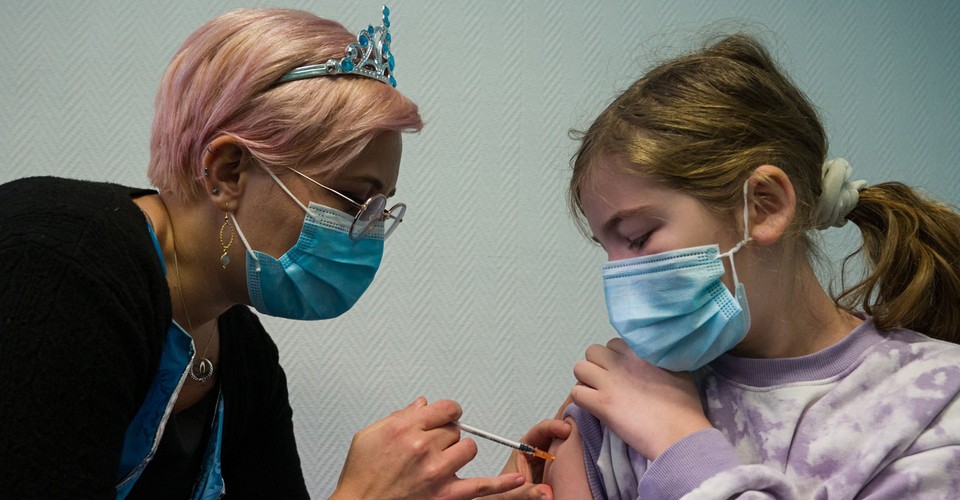 When the CDC recommended COVID-19 vaccines for 5-to-11-year-olds in early November, adult publications rushed to explain what the move meant for families, schools, and the pandemic at large. While most of the media competed for grown-up attention, a different network of sources targeted the group most affected by the news—but first, it had to explain what a vaccine is.

The children’s-news landscape is a strange one, melding education and entertainment to explain complex, adult topics to developing minds with short attention spans. Many outlets are connected with adult publications, such as The New York Times and Time, but certain children’s shows, such as Sesame Street, have also forayed into the news business. And while some have been around for years, others, including NBC’s Nightly News: Kids Edition and a rebooted Nick News, have popped up more recently, aiming to help young ones navigate this particularly stressful news moment.

Indeed, it’s hard to imagine a more difficult time to explain the news to kids. Communicating about the pandemic with adults is challenging enough—many sources face (often reasonable) criticisms for offering confusing guidance, instilling fear, and deepening a partisan divide. Those targeting kids must avoid all of those traps while also catering to the ways young brains process information. For one, we gain the ability to think abstractly as we age; in our childhood, we need concrete explanations, Abigail Gewirtz, a psychology professor at Arizona State University, told me. Children may get scared more easily, so kids’ news outlets tend to try not to induce too much fear, Gewirtz said. Editors also need to consider kids’ reading level (if they can read at all) and the depth of their knowledge of a topic (likely, not much). On top of all this, producers still must grab their audience’s attention, just like they would an adult’s, by keeping coverage focused on what children are actually interested in and being careful to not alienate them by talking down.

Read: How a kids’-news outlet is explaining impeachment

Despite these hurdles, or perhaps because of them, ​​kids’ media have achieved a level of clarity and directness in their pandemic coverage that can be hard to find in outlets geared toward older audiences. Articles are straightforward because they have to be; it’s the only way kids will understand them. They’re also heavy on context, making few assumptions about what the audience already knows. And though they’re mostly neutral in their tone, many will also acknowledge children’s feelings and soothe them where they can.

When I asked editors and producers about their goals for coverage, they all pointed to knowledge and a sense of comfort for kids. Those at Nick News and Time for Kids told me that their aim was to share information, not to convince. Many of the experts interviewed certainly encouraged vaccination, but those editors were keenly aware that the audience being addressed had little real agency to affect the course of the pandemic or to change vaccination rates. “We neither wanted to scare children who weren’t going to have [the vaccine], nor did we want to encourage children to say that they needed to have it. That’s just not our place,” Time for Kids’ editor in chief, Andrea Delbanco, told me.

Instead, Delbanco and many of the others I interviewed aimed to provide kids with a reliable source of information that they could learn from directly. Many efforts to educate children on the vaccine have shared the same basic format—soliciting questions from children and getting answers from experts, including acting FDA Commissioner Janet Woodcock, United States Surgeon General Vivek Murthy, and CDC Director Rochelle Walensky. Stories and segments often start with the basics about what vaccines do and later address practical behavior considerations: “My mask makes me hot. Do I still have to wear one?” one child asked Murthy on Nick News. “Will it hurt?” another asked of the vaccine on a Sesame Street special that aired on CNN. The uniformity may seem surprising, but those I spoke with told me that the approach felt obvious. “It just was a no-brainer to have kids ask the questions, not for adults to formulate it: ‘Well, what little Timmy meant to say was …’” Magalie Laguerre-Wilkinson, the executive producer of Nick News and the vice president of news planning for Nickelodeon, told me. “It was more like, ‘Look, I’ve got my birthday in July, and I want to have a party. Can I?’ So that’s about as direct as it will get from a child.”

This level of bluntness is both necessary for children’s understanding and one of the most refreshing parts of kids’ media. “Asking people to presuppose that you have no context or background knowledge to build upon gets a really different answer than one often gets when people are trying to spin an answer for adults,” Delbanco explained. “You really get right to the heart of certain things.” And this approach doesn’t preclude complexity, either. Although the interviews tend to start with quite simple questions (one kid reporter at Time for Kids asked Murthy to explain the difference between himself and Anthony Fauci), they build to surprising levels of nuance. Time for Kids tackled the difference between the FDA’s and the CDC’s role in vaccine approval, for instance, while CNN and Sesame Street addressed the safety of having playdates with unvaccinated friends. “The difference is the level at which [the experts are] speaking, not the information they’re conveying,” Delbanco said.

Communicating at the appropriate level can be as simple as working an analogy into an explanation, Sandra Calvert, the director of the Children’s Digital Media Center at Georgetown University, told me. For example, in the Sesame Street–and–CNN special, when explaining why the vaccine needed to be administered in two doses, CNN’s chief medical correspondent, Sanjay Gupta, pulled out an umbrella. He held it over his head only partially opened to demonstrate the protection that the first shot provided, then fully unfurled it to represent the much greater immunity conferred after dose two.

Read: Why a three-dose vaccine for young kids might actually work out

While the communication style may be different, kids’ media outlets share similar concerns as those reporting for adults. Laguerre-Wilkinson said that she relied on the same news judgment she used when working as a journalist for older audiences. She focuses on hitting major news moments and fact-checking misconceptions—because it’s not like young children can properly vet their sources. But she also considers children’s specific news needs, which can be different from what’s best for adults. For example, both Laguerre-Wilkinson and Delbanco told me that they worried about oversaturating kids with pandemic stories and re-creating the adult phenomenon of news fatigue in this younger age bracket. Laguerre-Wilkinson hoped that the short length of the programs she produced—most are about 60 seconds and air during commercial breaks between shows—would fight against this danger. Delbanco told me she has held her team back from writing too much about the pandemic. For example, though they did cover major adult–vaccine approvals, they steered clear of debates about vaccine mandates for adults.

Having a light touch can help with another major concern in kids’ news: scaring the audience. The psychologists I spoke with emphasized both that children might become afraid more easily than adults and that fear is not conducive to learning. Calvert described an ideal manner of communication that was “factual without being overly emotional, without being scary”—an attitude that matched the calm and mild-mannered smiles of the experts on the kids’ programs I watched. “COVID has just really freaked the hell out of a lot of people and killed a lot of people. But these are not terms that we ever use when talking about this,” Laguerre-Wilkinson told me. She described poring over each Nick News Break with a group of colleagues to identify moments with the potential to drive fear. “This word here is just a no-no; maybe we can tame this down a little bit,” they would say. Similarly, when Sesame Street covered the muppets’ worries about the pandemic, the adults often avoided using specific emotion words such as fear, simply referring to “big feelings.” Hearing that figures such as Big Bird are getting their shots could provide a sense of comfort, Calvert said. Children can have parasocial relationships with fictional characters, and Big Bird is a role model for many of them. “If Big Bird does it, it will be okay; I will be okay,” the thinking can go, she told me.

Indeed, many children are scared of needles and don’t like getting shots—but going in with an understanding of the science and the purpose of vaccines can make the process easier, parents told me. Camille Mackler, the executive director of the Immigrant Advocates Response Collaborative, based in New York, shared that her daughter, who has a deep phobia of needles, took comfort in a song about vaccination in an old Sid the Science Kid episode about getting the flu shot. “It might hurt a little bit / just a little bit / but it’s gonna help a whole lot,” her daughter sang as they drove to the clinic and waited in line. “It was something to tell herself and say and focus on, but it also put into context why we were doing this,” Mackler told me. Phil McGonigle, a start-up account executive who lives in Long Island, had a similar experience with his 6-year-old son. The Sesame Street–and–CNN town hall declared that kids who got vaccinated were rather like superheroes for their kindness in helping those around them, and his son held on to that reassurance. When he went to get his shots, he wore a Captain America cape, which helped him feel more confident as he faced a reality that can feel scary for us all.