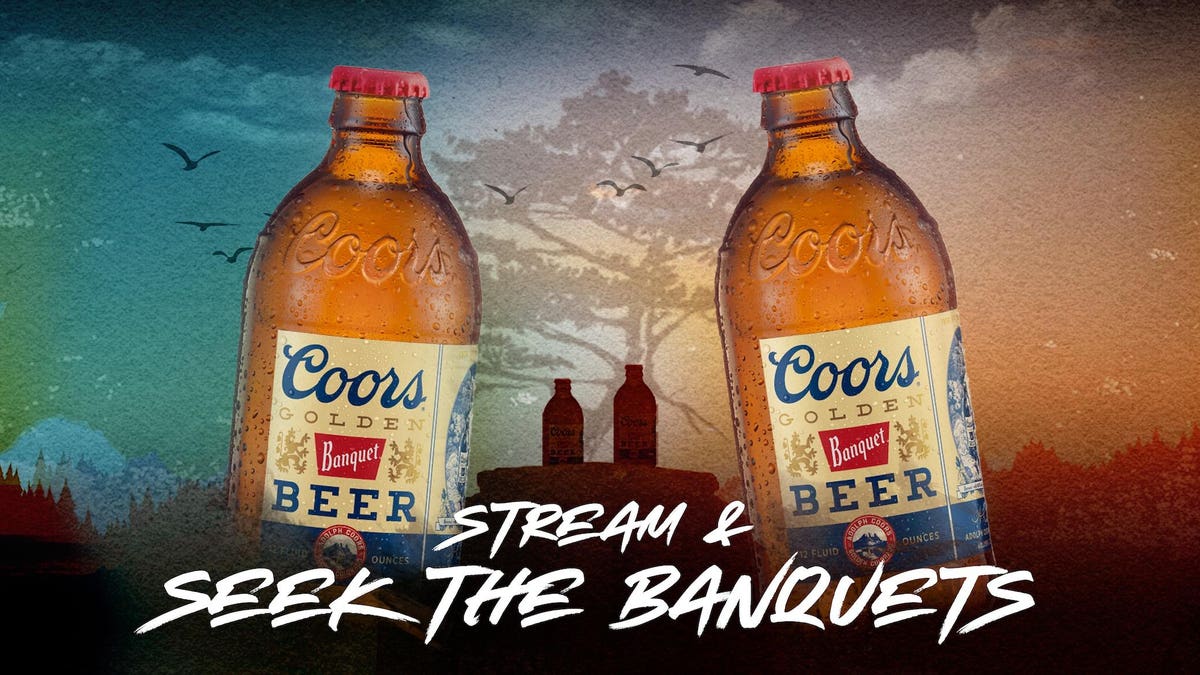 Before my sisters threw a Cobra Kai viewing party last year, they ran to the liquor store to pick up a pack of Coors Banquet.

If you’re on Team Johnny, you know why she made that liquor store run. So do the folks at Coors.

Capitalizing on the prominent role the brand plays in the life of this fictional California sensei, Coors Banquet just unrolled a new promotion aptly named “Seek The Banquets, ” which came out just a few days after season four premiered on Netflix.

Basically, viewers are invited to identify the number of times the beer makes an appearance in season four for the chance to win a year’s supply of Coors Banquet, as well as a Coors Banquet bonsai tree and some other swag.

“Coors Banquet has been organically and prominently featured in the last three seasons of the show so we wanted to deploy a brand act inspired by the hit that encourages watchers to tune in and keep and eye out for the banquet,” says Stephanie Clanfield, marketing manager for Coors Banquet.

Though Coors Banquet has featured prominently in a number of episodes since Cobra Kai made its debut in 2018, the brand does not have a formal relationship with the show. “But we love that the writers are fans of the brand,” Clanfield says. “We love the show and have a mutual respect with the writers room, so we wanted to give them some love in return and gamify the viewing experience with ‘Seek the Banquets.’”

Since the very first episode of Cobra Kai, Coors Banquet has been featured in the show. The third season had 40 million viewers, and that translated into more than 170 million impressions among viewers 21 and over over the course of the first month since it debuted, according to a new Nielsen metric, Clanfield pointed out.

The brand also saw increased Google searches and sales increased 13 percent during premiere week versus the prior year, according to IRI multi-outlet and convenience store data, she says. “Being included int he show has been exciting for us,” Clanfield says. “As Johnny Lawrence’s favorite beer, we’ve practically had a recurring role in the series. We are very excited to see what these numbers look like after the season four premier.”

“We’ve learned from the last few seasons that people notice Banquet and pay attention to how and when the brand shows up on screen,” she says. :So, we wanted to be able to show up in ways fans will recognize and get them participating with us throughout the season.”

Through January 31, fans can enter here for the chance to win a year’s supply of Coors Banquet and a Coors Banquet bonsai tree. To promote the contest, the brand is posting on various medium platforms, including Reddit, which has “a strong and active community dedicated to the show.” Whoever comes within a plus or minus of five appearances of the beer will be entered into the prize pool from which the grand prize and first place winners will be selected.

“With the show returning for season four, we had a feeling the main character’s favorite beer would be back as well, and we were right,” she says. “Coors Banquet actually makes an appearance within the first five minutes of episode one.”

That’s the first appearance, but you have to finish watching the season to get an accurate count. My sisters already know the count, but they’re not telling me.  They want to win that bonsai tree.